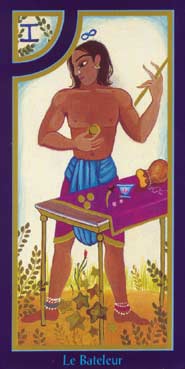 The Tarot du Roy Nissanka is a French deck based upon the myths of the medieval Sri Lankan king Nissanka. Only major cards have scenes, and the card titles and booklet are in French only. 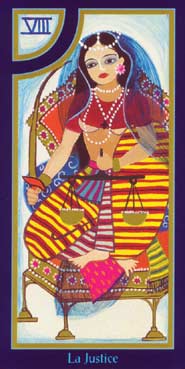 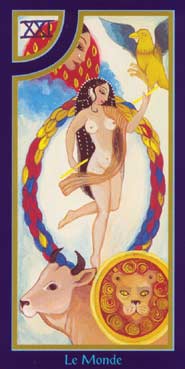 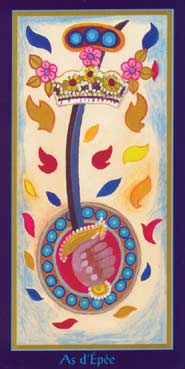 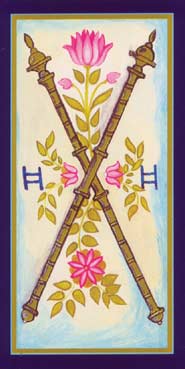 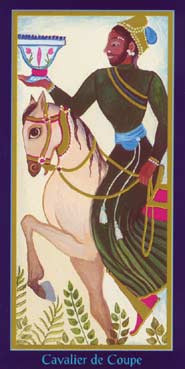 I fell in love with this tarot deck the moment I took it out of its box. It is beautiful! Reminiscent of Indian or Persian miniatures, the costumes are exquisitely detailed and the scene-less pips are lavishly decorated with flowers and vines. Even the reversible backs of the cards are gorgeous, in a deep navy blue with a lovely gold diamond pattern. The blue color is carried onto the front in the borders. Richly saturated pinks, purples and blues predominate and shiny gold highlights add to the richness of the cards.

King Nissanka was a 12th century king of Sri Lanka. It is said that he was wise and well respected. Many beautiful temples and other structures were attributed to him. Rather than being based on history, the cards seem to have been inspired by a legend surrounding the king. In the legend, the sorceress Shandra presented the king with a magical picture book. The book gave him his great wisdom, and it was in the colors that its secrets were held. The cards do not tell the story of Shandra and King Nissanka, but the colors and exotic costumes must have been inspired by it. Indeed great historical liberties have been taken; while King Nissanka was a Buddhist, the characters in this deck remain as in a traditional Marseilles deck and include ’Le Pape’ and ’La Papesse”.

The names of the cards are printed across the bottom in French. The booklet is also in French, however as the deck uses the traditional Marseilles style subjects, it should present no problem for the experienced reader.

Le Mat (The Fool) is not numbered. La Force (Strength) is numbered 11, and La Justice is numbered 8. My only complaint is that the Roman numerals painted on the cards seem to have been done by a different hand, or under pressure to hurry. They do not match the artistic skill level of the lovely illustrations.

The size of deck, approximately 4 3/4” by 2 1/2”, makes it easy to handle and shuffle. The card stock and printing are of a high quality.

This deck is one of my favorites for daily readings, or any reading where complete objectivity is necessary. It gives very balanced readings, is a joy to handle and work with, and I highly recommend the Tarot du Roy Nissanka to anyone who loves beautiful tarot decks!