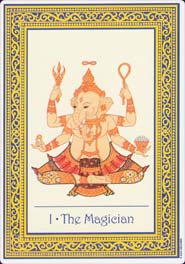 The Royal Thai Tarot has been created for fortune-telling by Thai Tarot reader, collector and enthusiast, Sungkom Horharin. The authentic artwork (unfortunately limited to the major and court cards) has been created by Thai artists and honours the art, culture, history and religion of Thailand. 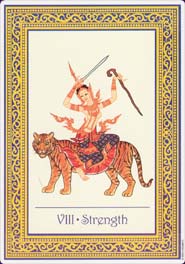 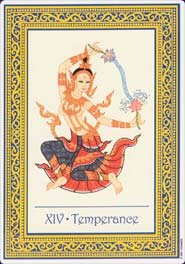 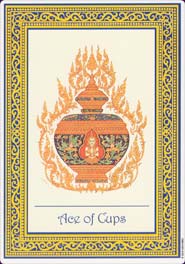 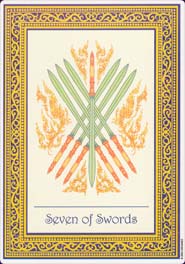 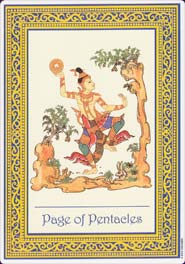 The Royal Thai Tarot deck has been created for fortune-telling by Thai native Sungkom Horharin. The art and architecture in Thailand's cities such as Sukhothai, Ayuddhaya, Bangkok, and in the Grand Palace, were the inspirations for the deck. Five years were spent researching and collecting information from Thai traditions, art, cultures, literature, Buddhism sects, history, and religion.

Sungkom, a self-proclaimed Tarot Master, was also the "first Tarot card fortune-teller in Thailand" in the 1980s. A Business Law lecturer by profession, he has his own Tarot prophecy hotline, is prominent in the Thai Tarot community, and is an avid Tarot deck collector. For the Royal Thai Tarot, he worked with two local artists, Wasan Kriengkomal and Verasak Sodsri, in order to combine a golden view of Thailand with the structure of Tarot cards, and create a unique fortune-telling deck.

The 78 cards of the Royal Thai Tarot (plus three extra – two title cards and one with the Celtic Cross spread printed on it) are largish in size but are easy to handle. The face of the cards have an ornate gold and blue centimetre-wide border surrounding the Thai image, while the backs have a dark blue background and a yellow and red reversible design.

The major arcana of the Royal Thai Tarot are attractive, depicting a person or deity drawn in stylized Thai art, floating against a cream background. All the cards have standard titles in English and Strength is numbered VIII, Justice XI. The minor cards are divided into Wands, Cups, Swords and Pentacles, and are pip cards with suit emblems rendered in the Thai style. I was a little disappointed by the non-illustrated nature of the suit cards: I would have liked to have seen more of Thai culture and daily life rather than just repetitive number cards.

On the whole, I found the deck to have appealing art, but to be rather impenetrable for those not familiar with Thai art or culture. The companion booklet does not offer any insight, background or explanation for the images used on the cards, just straightforward divinatory meanings. One can learn a lot from cultural or theme-based Tarots, particularly those which have a creator who is knowledgeable and passionate about their topic and explains it well, but I don't feel that opportunity was given here.

Sample meanings from the booklet:

XIV. Temperance. Looking into the past in order to be able to better understand the present. Using one's experience in order to deal more effectively with a present problem. Healing, self-analysis. Reverse: Discord. Conflict of interest. Hostility. Difficulty in understanding others. Sterility.

The Royal Thai Tarot features authentic local artwork and is the first Tarot deck available that has been devoted to Thailand. I’d recommend it only to advanced Tarot readers or those with a strong knowledge or interest in Thai art and culture.