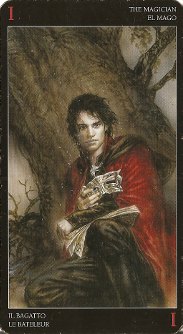 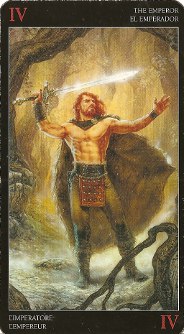 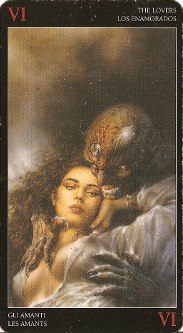 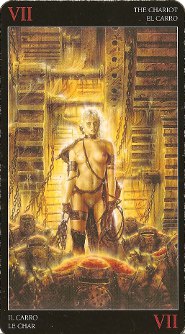 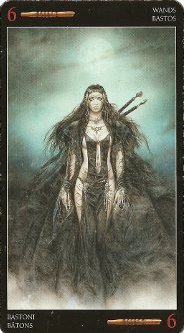 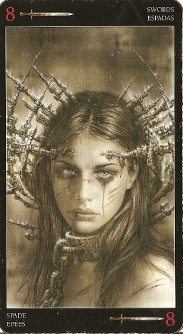 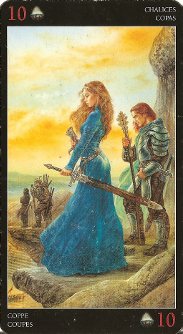 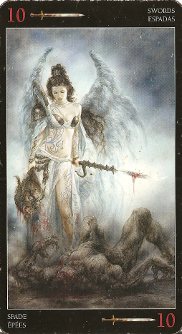 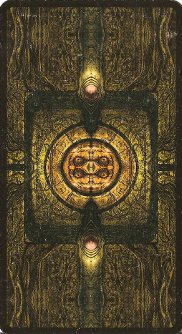 I'’m trying to get my head around this Tarot deck. I’'d been warned by different reviewers that decks published by La Scarabeo tend to be quite fetishy and not so symbolic for reading. I’d seen images for Royo Dark online and found the scan for The Magician card quite compelling, and loved that the minor arcane seemed to be as detailed as the major.

At first I was simply overwhelmed and bewildered by the seemingly endless parade of nude female figures. Reviewers had mentioned this aspect of Royo Dark, but I’'d scoffed. “Nudity! Pah! I’'m a pagan and a liberal, what’s a little nudity!” I’'d naively assumed that Tarot nudity would have a certain sacred, reverent quality, and since I liked the elegant depiction of The Magician, I thought other cards would follow suit.

It’'s not so much the volume of nudity in the deck which is difficult to swallow. I could probably get on board with an entirely nude deck, if done a certain way. Unfortunately in this case I found a lot of the nudity somehow very modern looking and rather pornographic in terms of style, especially as other aspects of the deck were quite mystical and ancient looking. I feel like this deck should have been one thing or the other, either an entirely nude deck with sultry kittenishness being the main theme, or a sort of gothic, apocalyptic, twisted dream.

It is not the fact of the nudity itself which spoils the effect, nor really the way in which it is depicted, but rather the contrast with the other elements which seems to clash. Some of the cards, and some details have been created with such a deep, and inspired sensitivity, it made me want to cry for the deck which could have been.

The few male figures in the deck are mostly conspicuously clothed and seem somehow more naked for it. Of the kings, only the King of Swords is human, the other kings being apes, who are in some sort of amorous act with a Queen or concubine.

In spite of these fairly formidable shortcomings it is impossible to dismiss Royo Dark as a shamelessly sexy fetish deck out of hand. Several cards stand out as almost definitively stunning. I would go so far as to say that The Magician, Judgement and the three of wands have been depicted so well, and with such striking subtlety as to possibly outshine any other depiction of these cards I’'ve seen. Other’s are disturbing but still interesting with the Seven of Cups showing a bride with a gorilla skull headdress in a softly lit snowy landscape. “The white bride has learned the language of death” the handbook provides helpfully.

The lesser numbered cards of the sword suit are almost completely in black and white, with certain highlights picked out in colour. Gradually more and more colour is added higher up in the suit. I found this detail quite charming. Several of the cup cards depict figures carrying swords with no cups in sight, although the booklet does make some attempt to explain this. Each of the tens depict success of some kind.

I usually regard any written material with a new Tarot deck as anathema, and want no interference with my intuition whatsoever, but I must say that with this deck I found the book quite helpful, if a little arcane. One or two sentences on each card is often quite telling when the card may seem utterly opaque.

In terms of reading, the Royo Dark can be surprisingly insightful if a bit menacing. I wouldn'’t easily try it on someone getting a reading for the first time, not only because of the nude imagery, but also there’s a slightly unsettling quality to the images which is only noticeable with some practical experience.

While first impressions may lead one to think of Royo Dark as simply an art deck, after using it a few times, I’'d have to say it’s much more, although I’'m not sure exactly what.