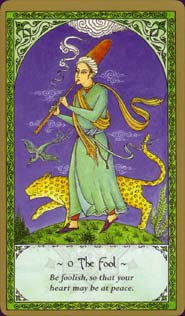 The Rumi Tarot is based on Sufi traditions as interpreted by the medieval Persian mystic, Rumi. Created and meticulously painted by Nigel Jackson, who also was the author and artist of the Nigel Jackson Tarot.


Card Images from the Rumi Tarot 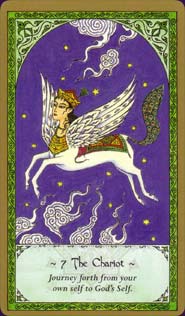 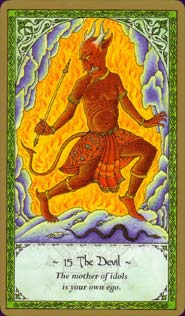 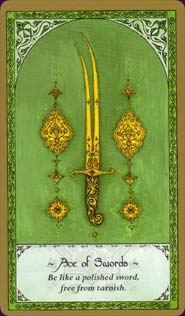 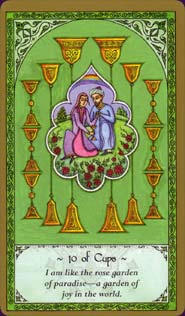 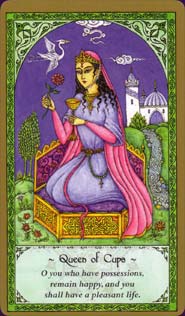 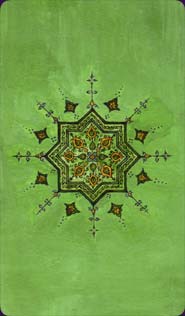 I took one look at the Rumi Tarot when it arrived, and had two simultaneous thoughts: “I love the artwork.” and “What is with this green color!” I still don’t like the green coloring, but I do like the deck. The basis for the deck is the Sufi traditions as seen through the eyes of the thirteenth-century Persian mystic Rumi. His poetry is a celebration of love, and the ability of love to set us free. Within his poems is the spiritual philosophy known as “tawhid” – the seeking of union with the beloved from which we have all been separated. Nigel Jackson has used this important tradition to create a mystical and contemplative Tarot that takes the reader (and the Seeker) on a path to their own spiritual bliss.

I find this to be an important addition to the Tarot world, not only because of the vivid imagery but because of the thoroughness of the background information. Nigel Jackson is more than qualified to write on this subject, as he he is a well known artist and illustrator specializing in the Western Esoteric Tradition. His credits include “Medieval Enchantment: The Nigel Jackson Tarot”, and he has been involved for over twenty years in expressing the language of the gods through his visual art. Jackson has also done intense metaphysical study, receiving Minor and Major Holy Orders in the Gnostic ecclesiastical tradition, initiation into multiple theurgic rites, as well as initiation into two traditional Sufi chains of filiation.

I love the symbolism and opulence of the Eastern traditions, and can very easily (and happily!), get lost in them for copious amounts of time. Jackson followed a traditional structuring for the Rumi Tarot: 78 cards, traditional titles (with the following exceptions – the High Priestess becomes the Priestess, and Strength becomes Fortitude), the four suits are entitled Swords, Cups, Staves and Coins, with the Court cards entitled King, Queen, Knight and Page.

The deck comes as a boxed set – the 78-card deck, an black organdy Tarot bag and a 312 page companion book. In his introduction, Jackson notes that his focus for this deck is that it would be effective as a tool for spiritual knowledge, inner guidance and contemplation. The companion book is divided into four parts: Part One: The Path of the Rose, Part Two: The Major Arcana, Part Three: The Minor Arcana & Court Cards, and Part Four: Using the Rumi Tarot.

The Path of the Rose begins with a discussion of the historical roots of Sufi tradition, and the concepts of purity and wisdom. Jackson states that the Rumi Tarot draws its foundation/symbolic sustenance from the stations of the Path of the Rose, run through the “Earth of Visions”, the “Earth of the Emerald Cities” to the transcendent sphere of illumination and truth, guided by the deep wisdom of the Master, Jalal al-Din Rumi. The images and symbols of this deck are to be contemplated as archetypal reflections and mirrors of the divine qualities and beautiful Names of God. The Major and Minor Arcana denote the degrees and waystations upon the Sufi Path of Light.

Jackson then goes into a discussion of the Microcosm and Macrocosm of the Sufi Universe. These worlds are traditionally correlated with the yogic chakras, mapped within the subtle body. He also discusses one of he central concepts of the Sufi tradition – that of the Perfect Man. This spiritual being represents the celestial Adam as he existed in paradise, with echos of ancient mythic images of the Primoridal Man from Persian traditions. (Jackson’s words.)

From there Jackson goes on to discuss the Ladder of Illumination, and a short biography of the mystic Rumi.

The Major Arcana are presented with black and white scans, underneath which appears a short saying pertinent to the energy of the card (for the Fool – Be foolish, so that your heart may remain at peace). This is followed by a discussion of the card, and upright and reversed meanings.

The Minor Arcana are presented with black and white scans, underneath which appears a short saying pertinent to the energy of the card (for the Ace of Swords – Be like a polished sword, free from tarnish), followed by a discussion of the card, and upright and reversed meanings.

The suits of the Minor Arcana are seen as symbolizing the four Aristotelian elements, thus encapsulating the alchemical mysteries of the Sufi path.

The Court Cards from the Rumi Tarot can be seen as Oriental potentates, sultans and sultanas enthroned in their palaces, surrounded by all due pomp and circumstance. Some of the features of the Rumi Tarot court cards are taken from the fifteenth-century cards of Mamluk design. While the cards from the Islamic world use only male imagery (King, Vizier, Second Viceroy and Pageboy), in the Rumi Tarot Jackson has incorporated the Queen to replace the Vizier, and the Knight to replace the Viceroy to equate with the medieval European pattern.

The Court Cards are presented with a black and white scan, underneath which appears a short saying pertinent to the energy of the card (for the King of Coins – Look how wonderful my game is, my dress extraordinarily beautiful), followed by a very short discussion of the card, and upright and reversed meanings.

In his section on using the Rumi Tarot, Jackson includes a consecration ritual, and several spreads, including a six card Hexagon spread, and a twelve card Twelve Houses spread. The epilogue is The Recital of the Emerald Dome. There is also a glossary of Sufi terms, with appendices for the Planetary Heavens and correspondences with the Tarot and Sufi symbolism, followed by a selected bibliography.

The cards are approximately 2 3/4 “ by 4 ľ”, of quality, glossy card stock. The backs are light green, reversible, with imagery of a mandala in the middle. The faces of the cards show a Ľ” gold border, followed by a slightly narrower green border. At the bottom of the cards is a window with the card number, title, and the same saying that we see in the book. This can be disconcerting, but it is not the same as having keywords for upright/reversed meanings placed on the card. The saying are short enough to be able to take them into meditation/visualization to good effect.

Something that I found quite interesting is that figures seem to float in the pictures, with their feet not quite touching the ground. This is very evident in cards such as the Fool (who is walking with a large cat, and not a small dog). Many of the images are seated, some on hexagonal bases (the Priestess and the Empress), and some on cubic bases (the Emperor and Justice). The Hierophant is kneeling on a rug, while the female figure in the Moon is seated above a quarter moon, between two towers. The Chariot shows a winged white horse with a human head. The Wheel of Fortune shows the figure of Justice standing behind and above the wheel.

In the suit of Swords, all of he swords are curved (as opposed to other decks, in which the swords may by curved, with the “odd” numbered sword being straight. The Pips (numbered cards) do show imagery, but it is contained in figure in the middle of the card. Some people may find this off-putting, but I found it very attractive.

I was very appreciative of the history and background that Jackson provided for this deck. In my opinion, it alone is worth the cost of the kit. I liked the cards, I could work easily with the imagery, and I was fascinated with the way in which the imagery on the Pips was presented. My only quibble is with the extensive use of green. I could not use this as an everyday reading deck, although I could use it for occasional reading, and would readily use it for visualization, meditation, or ritual/ceremony.

This deck will appeal to collectors, to people interested in religious-based decks, and to those wishing to work with Eastern mysticism.