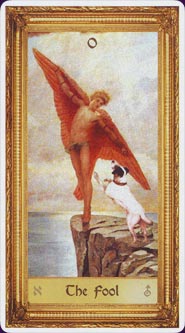 The Sacred Art Tarot takes religious and classical artwork and iconography, and cut-and-pastes extra tarot symbolism to link it with the traditional Rider-Waite imagery. Each of the 78 illustrations is surrounded with a gilt frame border. 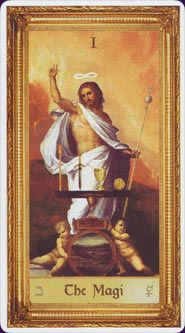 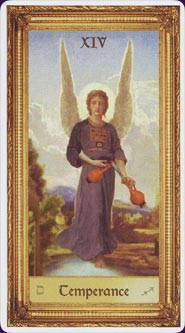 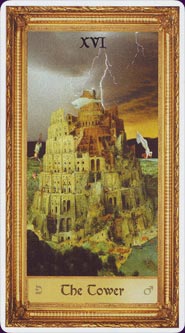 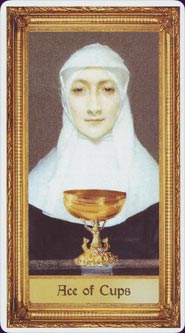 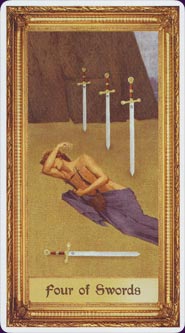 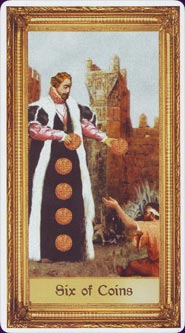 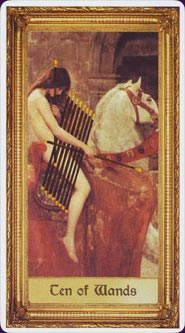 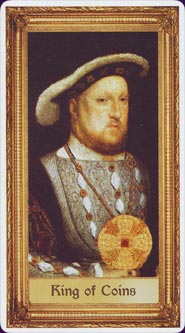 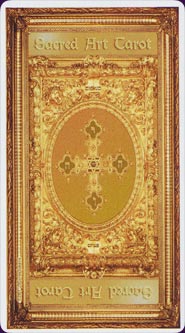 The Sacred Art Tarot takes religious artwork from the Middle Ages, the Renaissance, and the pre-Raphaelites, and adds extra tarot symbolism to make a 78-card deck in the Rider-Waite tradition.

The deck was four years in the making, but sadly overall it falls flat for me. Some of the cards work as complete tarot images, but in many more the juxtaposition of the classical paintings and the added computer-generated tarot elements is jarring - they distract from and even clash with the great original art rather than enhance it.

The added tarot elements don’t fit the painted world or atmosphere and sometimes don’t even seem to be obeying the same laws of physics. There are swords resting in hands rather than being held by them, as though they were weightless (Queen of Swords); strange angles in perspective (the Chariot); and most obviously, the colour tones of the tarot emblems just don’t match. The Wands are black thin rectangles with no blend or shape, and far too dark and sharply outlined against the aged hues of the paintings. The wands are also identically cloned in multiples (as are all of the tarot emblems on all of the suit cards). The Cups are ultra-shiny and untarnished, the Coins ditto, not exactly what you’d expect from such old paintings.

There are a few cards, like the Wheel of Fortune, that would have worked really well as tarot scenes on their own and without embellishment. But the forced addition of tarot symbols that don’t blend with the painting is too distracting. Strength is a quite beautiful image that could have stood on its own, yet the infinity symbol has been inserted over the women’s head in an unnecessary attempt to force the symbolism of the Rider-Waite into the painted image.

Amongst the deck, there are some cards that work: the result of combining the art and tarot symbolism seems more successful when the tarot elements have been arranged around the image, rather than artificially inserted into the scene. The Nine of Cups incorporates the cups into and around the scene. The Six of Swords have three swords above and three below, framing a biblical scene of Mary and Jesus on a donkey. In the Four of Cups, the lady holds one of the cups tilted over, and three are placed on the ground in front of her.

The 48-page companion booklet is sparse; with a foreword by Jeannette Roth of the Tarot Garden online store (the best part in it), simple divinatory keyword meanings for the cards; and two well-known spreads. I was disappointed not to see any commentary on the art or the reasons for its selection.

The deck comes in similar packaging to the latest decks from US Games, in a medium-sized outer box that holds the fold-out spread sheet, and the inner box that has the cards and the booklet.

The Sacred Art Tarot is really a wasted opportunity. There is so much history and beauty – and even tarot symbolism - in the religious paintings that should have come to the fore, but doesn’t get a chance to be noticed over the unnecessary elements added to shoehorn the cards into the Rider-Waite mould.