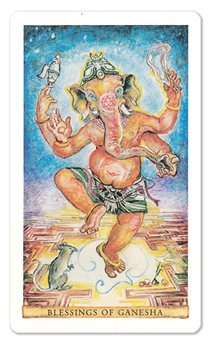 The Sacred India Tarot brings tarot together with Indian mythology and spirituality. The major arcana depict Indian deities, while the minor suits depict scenes from Indian epics and legends. A deep and beautiful deck for meditation, the serious Indian scholar, or the yoga practitioner. 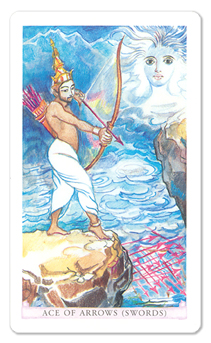 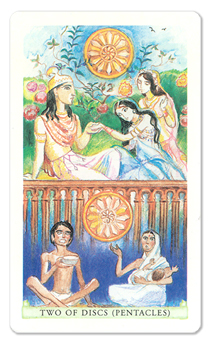 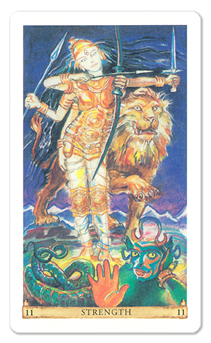 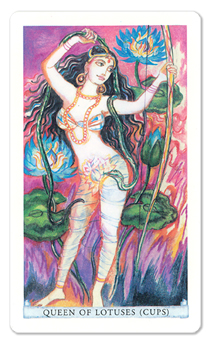 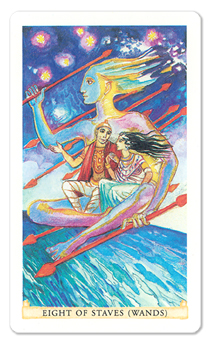 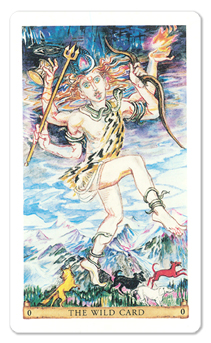 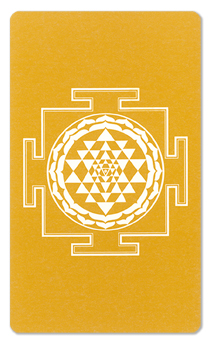 My sister gave me my copy of the Sacred India Tarot. She travels to India regularly to conduct yoga teacher training programs, and was delighted to find this deck and book set in a small bookshop in Rishikesh, right next to the Ganga. I remember how pleased and excited she was to present it to me, because up until that point neither of us had ever come across anything that so elegantly brought together our respective passions, Tarot and Indian mythology and spirituality.

The Sacred India Tarot is the product of just over a decade of work, a collaboration between its Mumbai based creator, Rohit Arya, and British illustrator, Jane Adams. As a Tarot enthusiast and scholar, Arya came to the conclusion back in 2000 that Indian literature and spirituality meshed so well with the structure of the Tarot that he must do what had never been done before, create a deck based on sacred Indian mythology. Although many Indian artists were interested in the project, Arya couldn’t find one who had any knowledge about Tarot. A serendipitous meeting brought Jane Adams into his life, a UK based artist who happened to be deeply interested in both Tarot and Indian mythology and symbolism. The Sacred India Tarot is the result of years of back and forth telephone conversations and email communications between the two.

In general, the deck follows the RWS tradition, with some exceptions and additions.

The Major Arcana depict archetypal forms of the gods and goddesses of India, which represent esoteric knowledge and the destiny of the querent, as well as the evolution of life from a yogic perspective.

The Fool appears as The Wild Card (the name changed in deference to the deity depicted on it). Justice is card 8, and Strength is 11. There are two versions, a male and a female, of Death and The World. The deck also includes two Grace Cards, the Blessings of Ganesha (placed at the beginning of the Major Arcana) and the Blessings of Babaji (placed at the end, after The World).

The suits of the Minor Arcana keep the usual elemental correspondences, appearing as Discs (Pentacles/Earth), Lotuses (Cups/Water), Staves (Wands/Fire) and Arrows (Swords/Air). The suits of Staves and Arrows depict scenes from two of India’s great epics, the Ramayana and the Mahabharata respectively. The Lotuses tell the love story of Shiva and Parvati, while the Discs illustrate the life of the Buddha. The Court Cards consist of King, Queen, Knight and Page.

The cards are printed on good sturdy stock, which has been laminated with a slight matte texture, making them solid and easy to handle, 4.5” by 2.75” in size. The card backs are reversible (there is a very slight indication of direction at the centre of the card but you really have to look for it), featuring an illustration of the Sri Yantra. All cards have a white border and the name of the card printed at the bottom.

The images throughout the entire deck are colourful and full of movement, and yet the style of painting keeps the atmosphere still soft and ethereal. The packaging is both practical and inventive, as the deck and companion book are housed in a sturdy box that converts to a decorative altar featuring the image of Babaji, a Himalayan Maha yogi (or saint) who is said to be immortal. The intention is that the reader can meditate on the image of Babaji for guidance before beginning the reading.

As a devotee of the RWS tradition, I find the deck itself to be quite stunning and a little unsettling, familiar and yet utterly different. This being said, the translation of the Major Arcana into the gods and goddesses of India worked well for me, and it was easy to recognize the correspondences and archetypal energies.

The Fool, renamed The Wild Card, depicts the chaotic-looking Vedic god Rudra, carrying all of creation before him with untamed and irrepressible energy. According to the companion book, Rudra is the new beginning in every ending, and the basic meaning of the card is embrace life, accept risk, and welcome ambiguity. The goddess Durga with her lion and variety of weaponry shines as Strength, she is the mother and the warrior, here to thwart evil and accelerate spiritual evolution. In a reading, she indicates determination and a will to achieve, a period of emotional and spiritual strength.

The addition of the Grace Cards really sets this deck apart from the traditional format. My favorite is the Blessings of Ganesha card, depicting the beloved elephant-headed god of beginnings, the remover of obstacles. This card was included by the deck creator, and placed at the beginning of the Major Arcana, because Ganesha needs to be invoked before starting any kind of ritual or endeavor otherwise there is no hope of success.

Although I found that the Major Arcana and the gods and goddesses of India fit together very well, I had some trouble relating to the Minor Arcana.

As mentioned, the suit of Arrows (Swords) depicts an aspect of the Mahabharata epic, and the Ace of Arrows shows a dramatic scene of the hero, Bheeshma, holding back the waters of the river Ganga, who is also his mother. The companion book describes this as a moment of transition and sheer intellectual potency. It is a compelling scene, but lacking in the clear-cut power of the RWS Aces, with their sharp focus on the symbol of the suit and what that symbol represents.

The suit of Discs (Pentacles) illustrates the life of the Buddha, with the Two of Discs showing the walled city created to cut off the young Siddhartha from the painful reality of the outside world. The meaning of the card is stated as a change in financial circumstances and striving for balance in all things.

Although the explanation of the card made sense to me, simply looking at the illustration didn’t lead me to this interpretation, and rather called to mind the RWS Six of Pentacles instead.

On the other hand, the Eight of Staves (Wands) charmingly evokes the spirit of this card with a scene from the Ramayana of Rama and Sita travelling at high speed through the air, surrounded by red staves and glowing stars. The meaning of the card in this case is rocket-like speed to all things in your life, and things happening sooner than anticipated but it’s for the best. Also, the sensuous Queen of Lotuses (Cups), here Rati, the wife of Kama, very clearly captures the spirituality and emotional depth of the Queen of Cups.

A very detailed companion book, written by Rohit Arya, accompanies the deck. The structure of the book includes introductory information about how the deck came to be, the history of Tarot, and an explanation of possibly unfamiliar terms used. Arya provides an in-depth description of each card, a discussion of the meaning in a reading, and a question or piece of advice for the querent. The book also includes instructions about how to conduct a reading, care for your cards, and protect yourself as a reader. Finally, Arya includes several traditional Tarot spreads (such as the Celtic Cross and the Horseshoe) and some original spreads particularly for this deck.

The major theme that runs through the book is that prediction is the least significant aspect of the Tarot, that it in fact should be viewed as a tool for finding the answers to life’s questions, as a trigger to intuition and creativity, as an aid to meditation, and as a spiritual path or process. Arya also emphasizes the universality of Tarot across time and cultures. This part of the book really resonated with me. However, Arya also says that it is crucial to study the book carefully and learn all of the card meanings by rote. He says that, “The meaning cannot be clumsily deduced or just intuitively triggered by the action depicted on the card, every significant meaning has to be independently learned and applied.”. He also says that working with the Tarot will develop the intuitive side of the psyche, but this is, “not an encouragement to sloth.” (Both quotes from page 38). As a serious student of the Tarot, I believe that of course it is necessary to have a strong grounding in the meanings of the symbols contained within the cards, and that any and all knowledge about the Tarot will increase your prowess as a reader. However, I don’t think that the role of intuition should be downplayed as much as Arya states here.

In all honesty, I have to admit that I found the companion book somewhat tough to read. The tone is scholarly and quite dogmatic, and not having an extensive background in Indian mythology, many of the nuances were probably lost on me. The book is rich with information, but the writing style made me feel a bit overwhelmed.

Personally, I don’t use this deck for readings, but in my experience the Major Arcana work very well as a tool for meditation. The Sacred India Tarot is also a lovely way to familiarize yourself with the fascinating pantheon of Indian deities, and if you are a more serious scholar of Indian mythology and literature or a yoga practitioner, you will find the companion book to be an indispensable source of knowledge.

In summary, I love this deck. It is a rare and thrilling thing to come across such an authentic deck, created by someone who is embedded in the culture that the deck embodies and has real expertise on the subject matter. I recommend it as a unique and beautiful addition to any Tarot collection.

Each card has a 4 “Tree of Life ” pictures as background. This “Tree of Life” is none other than Banyan Tree or Peepal Tree. The Buddha got his illumination meditating under Bodhi Tree. The tree is visually a diagram of ten interconnected spheres, connected by 22 lines which represents the 22 levels of Human Soul’s Evolution. These tree are commonly found in every temple in India and considered sacred.

It has 22 Major Arcana Cards only and for each card it has an Indian Name, the Indian symbolic image, meaning and significance of the symbols in Indian traditions. Also it has stories from famous Hindu mythology like “Mahabharata” and “Ramayana.”

One of my favourite cards is the Lovers card, which depicts Radha and Krishna who are symbols of eternal love in Hindu Mythology. I am sure every young love bird in India has prayed to Lord Krishna for meeting their beloved soul.

Another favourite of mine is “Strength” usually depicted in Rider Waite cards as taming a lion but in India I guess we relate to “Elephant” for pure strength. Strength which protects yourself and your family against harm, not revengeful at all. It’s a good deck for doing chakra readings. The author has also introduced a new spread for “Karmic Reading”. I must thank Kiran for creating and sharing it with world. I could relate to these two spreads with my practice of “Reiki Healing” and “Past Life Regression Therapy“ respectively.