The Sacred World Oracle has 44 cards of animals from nature and from legend, and celebrates the beauty and diversity of the Earth. From talented tarot and oracle artist, Kris Waldherr, it's designed to offer gentle guidance and advice. 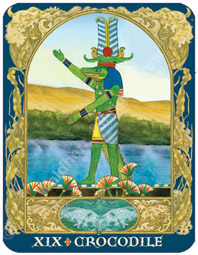 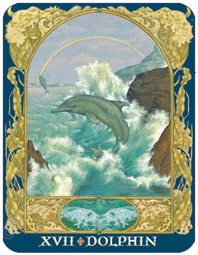 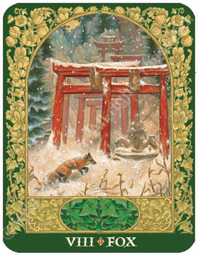 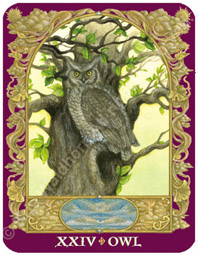 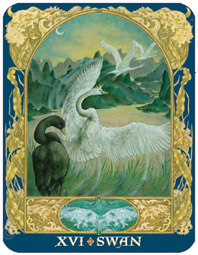 Kris Waldherr is one of my favorite artists (and authors!). The quality work keeps on coming with the “Sacred World Oracle”, a 44 card oracle deck based on the four elements (Fire, Water, Air, and Earth), which comes with a 48 page LWB (Little White Book).

Waldherr draws from myth, folklore, and nature to celebrate the beauty and diversity of the earth, and to bring gentle guidance into the lives of those that choose to use it. I loved that the point was made in the introduction that the cards both contain the message, and act as the vehicle to bring the reader the message. Our personal experiences act as a frame of reference for interpreting the cards in view of our daily life. We are essentially, according to Waldherr, releasing information that is already deep within our psyche. These sacred cards help tell our sacred stories.

The deck is broken down into four quadrants, representing the four elements. Each quadrant has animals associated with it:

The cards are presented in the LWB with the card number, name, keywords, and a short paragraph on how to interpret the card. A sample card from the LWB reads:

The cat is perhaps the most mysterious of mammals. The ancient Greeks associated the cat with the Moon Goddess, Artemis. In Europe, cats wee believed to be the familiar of witches and wizards. However, in Japan and China the cat was honored as good luck talismans. While cats are prized pets all over the globe, no culture has ever surpassed the Ancient Egyptians in revering them. Four thousand years ago, the cat was worshiped there as the sacred animal of Bastet, the Egyptian goddess of happiness, love, pregnancy, and childbirth. The Cat card challenges you to find ways to express your individuality. How can you create more magic and beauty?

The cards are 3.6” by 4.6”, which can be a bit awkward for small hands. However, I have small hands, and had no problem working with the cards. The backs have a Ľ” white border, surrounding a reddish brown background, with gold icons in the four corners. In the center is a circle, divided into four quadrants to represent the four elements. The circle has a fine gold border. In white letters above and below the circle are the words “ As Above, So Below”. While each quadrant is color coded, I still view the backs as reversible.

The card faces have a Ľ” white border, followed by a color-coded border. Earth is a dark green, Water is a light blue, Air is purple, Fire is a brownish-red. An ornate gold border surrounds the imagery, which appears within an arch. The name of the animal depicted, along with the card number (in Roman numerals) is placed in white letters across the bottom of the card. The effect is beautiful – that of looking through a window.

This is a deck that could be used by anyone, of any background, and any age group. It is gentle, bringing wisdom to the reader in a way that it will be accepted.