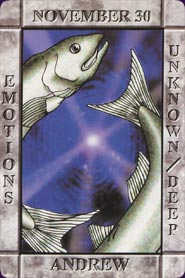 The Saint Deck is a fifty card divination deck-and-book set. Each card is linked with a different Christian saint, and is illustrated with the saint's emblems surrounded by a grey border containing keywords. While not a Tarot deck, some of the cards correlate with the 22 major arcana.


Card Images from the Saint Deck 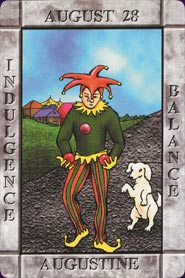 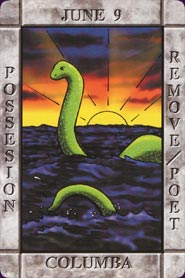 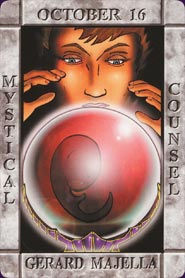 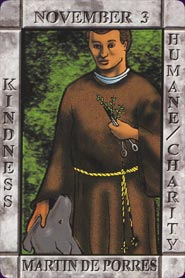 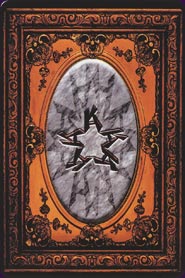 The Saint Deck - fifty cards aligned with Christian saints – is the work of Karen Prioletti, the author, and Ann Trump, the illustrator, who are cousins from an Italian Catholic background. In their words:

"As kids, Ann and I took for granted these wonderful saints, always there to shield us, and there for every need. We never felt alone because we knew we could use the energy of the saints – they were our protectors, on that precious piece of metal, doing their special jobs giving us comfort and to this day they still do."

The fifty saints used on the cards have been chosen from the full pantheon available because they were the ones to appear to the author and artist and make themselves known through invocations, meditations and prayer. On the cards, there is a colourfully illustrated central scene, surrounded by a grey stone-effect border which contains the name of the saint, the date of their saint’s day, and keywords on each side. (The cards also have a relationship with the Tarot majors as some of these cards correlate with a saint’s card, but it’s more a coincidental than a planned association.)

The saints pictured include:


The art has a kind of children’s story book appearance, and contrary to my expectations (probably from experience with Robert Place’s Tarot of the Saints), the saints themselves are not always pictured. Instead there are symbolic representations of their patronage or emblems. The Agatha card pictures two golden bells on paving stones, in front of a crescent moon. Francis of Assisi shows, a wolf, a small bird, and a deer with streams of sunlight shining. Theresa has a single, blooming, dark-orange rose, which is growing still on its thorned stem against and green and black background. Lucy’s card is a little odd, with a yellow sun looking down on a pedestal that holds two veined eyeballs. The backs have an ornate frame-like design like a leather bound photo frame, with an grey oval shape in the centre and a pentacle-like shape worked into it.

There is a nice amount of supporting information to the Saint cards. There are nine extra cards included with the deck; five double-sided cards with shorthand info on the saint, their traditional patronage, the intuitive interpretation, and its relation to Tarot; and four with an introduction to the deck, history of the saints, and the ‘traditional method of card reading’ with a ten card spread.

As well as the extra cards, there is a 155-page companion book available, the ‘Saint Deck Book’. It has more detailed information on each saint – their name, date, era, patronages, emblems, background and biography, interpretation, and artist’s notes – plus basic instructions for its use, including methods of card reading and spreads. It’s most helpful for someone who has just picked up the Saint Deck as their first ever divinatory or self-development device.

Described as a deck of saints, but not just for Catholics, the Saint Deck it is intended to ‘give everyone the opportunity to experience the protective shield of these wonderful guides’. Its non-threatening cards are suitable for people who may not have considered card-reading before, and for more experienced readers who are most comfortable working with Catholic saints for prayer, meditation or divination.