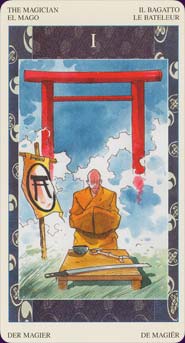 The Samurai Tarot is a themed deck based around the samurai tradition of feudal Japan. It has non-standard tarot imagery on the 78 cards, and detailed comic-style watercolour illustrations.


Card Images from the Samurai Tarot 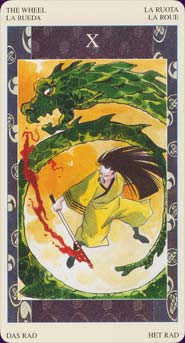 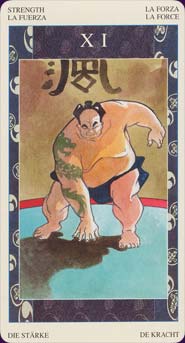 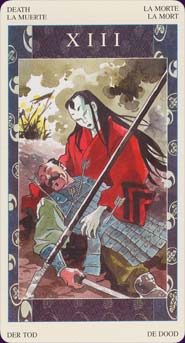 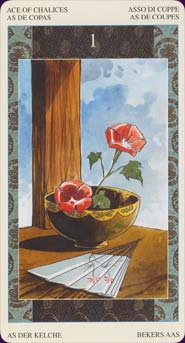 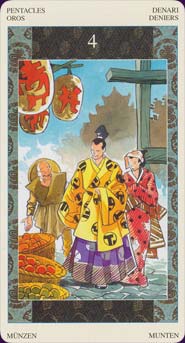 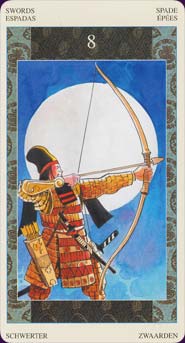 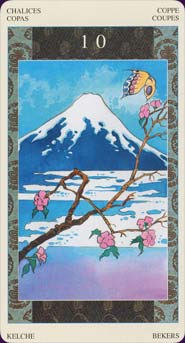 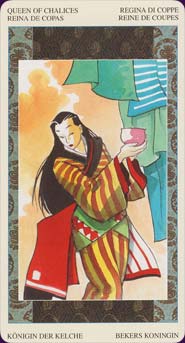 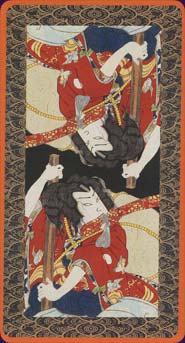 Samurai Tarot is a fascinating addition to Lo Scarabeo's wonderful line of art Tarot decks. Based on the Samurai tradition of feudal Japan, this deck takes the Fool's Journey to new levels. The Samurai were much more than simple warriors - they placed their lives in the hands of their lord and their clan. As the LWB points out - duty was the Samurai's most important focus. Does this not resonate with the "duty" of the reader to interpret the story of their readings in the best manner possible? Do we each not have a "duty" to progress as individuals as far as we can in each lifetime?

For the Samurai, their path was defined by an elaborate moral and behavioral code termed "Bushido". The basic philosophy of Bushido was complete freedom from fear, including the fear of death. The "Samurai Tarot" is presented as the journey of the "inner Samurai" through the tests of life. The goal of the original spirit of Bushido focuses more on the "inner enemy" than on the physical elimination of enemies. In this manner, the legacy of the Samurai keeps alive the path toward moral progress and the forming of a mature personality - the process of "individuation" that is the Tarot.

The Major and Minor Arcana reflect the Five Buddhist Elements of the Universe: Earth, Fire, Water, Wind and Air, as well as some aspect of the physical or spiritual life of the Samurai. The divinatory meanings are expressed as brief teachings, akin to haiku. the Major Arcana reflect the myths of Japan through its Gods and Heros.

The suit of Wands deals with the Samurai competing with himself and his unconscious (his desires, fears, and weaknesses, which take the form of spectral apparitions). The principle of the Ace of Wands is Hi (Fire), with the keyword undertaking.

The suit of Chalices is where the Samurai, having traveled the night of the soul, encounters the evolution of his emotions reflected in nature: Zen. The principle of the Ace of Chalices is Mizu (Water), with the keyword adaptability.

The suit of Swords represents the destination of the journey undertaken by the Samurai. The destination is not an end - it is a connection with previous journey's in an infinite spiral. The principle of the Ace of Swords is Kaze (Wind), with the keyword of thought.

The court figures in this deck are titled King, Queen, Knight and Knave. They are represented by historical or legendary figures from the Japanese tradition.

References from the movies, literature and the comics are listed for the reader that wishes to go further into the study of the Samurai culture.

The cards themselves are 2 1/2" by 4 3/4", of sturdy, glossy card stock. The back have a 1/4" brownish-red border, followed by a slightly larger green patterned border. in the middle is a depiction of a Samurai, upright and reversed. It would not be possible to tell if a card had been drawn in the upright and reversed positions.

The artistry in this deck is very gentle, with a very mystical quality. We find the Fool as an old man, with a staff in one hand and a fishing rod (with a fish on the hook!) in the other. The Magician appears as a Buddha like figure in a yellow robe, seated in front of a low table, on which rest his tools (sword, wand and chalice). Behind him we see a cloud filled sky, and some type of red structure (two red pillars on each side, with a narrow red board between then close to the top, and a third pillar at the top, connecting the two vertical pillars. The Goddess (High Priestess) is a lovely multi-armed figure holding an open book in (one) of her right hands. The Empress is a bit disconcerting, as she appears as a warrior, with a scepter ending in a blade held firmly in her left hand, and a look of determination on her face.

The Priest is a Hermit-like figure, in a gray robe, with a staff in his left hand, standing at the edge of a pond, surrounded by animals, with a full moon in the background. Justice is awesome, showing a huge, ethereal, Buddha-like figure, with his hand clasped together in front of him, a night sky in back of him, and three darkened pagodas in front of him. There is definite humor in the Monk Hermit), which shows a rotund Buddha-like figure in a red loincloth, seated on the ground, fanning himself with a leaf that he hold sin his left hand. What appears to be a frog figure is balancing himself above the figure on the limb of a tree. The Wheel (Wheel of Fortune) shows a bright green dragon, head and tail circled together, with a Samurai at its center. The Hanged Man moves away from tradition a bit, as it shows two figures on the ground, one of which is holding the end of the rope from which the Hanged Man is hanging, with the other figure holding a swords in his right hand. The Hanged Man, wearing a red coat, hangs by one foot only, with his arms free, and a sword in his right hand. The World is an interesting card, showing three pillars, with a female figure standing on top of one of the pillars, and what appears to be the same figure at the bottom of the pillar. The World shows a female figure wearing a kimono, holding onto a white ribbon that forms a circle with the Yin/Yang symbol in the middle.

The Aces are interesting cards, with the Ace of Chalices showing red flowers coming from a low container, with an open fan to one side; The Ace of pentacles shows three figures crossing a bridge, with two circles, one inside the other, in the sky above them. In the middle of the inner circle we see what appears to be an "S". The Ace of Wands shows a hand holding a Wand, with a walled fortress behind it, topped by a large building (castle?). The Ace of Swords shows a sword held in the right hand of a warrior in war gear, with an object that I cannot identify in his left hand.

While the symbolism in this deck is not traditional to Tarot, it does follow its own tradition, and is very well presented. This is a theme deck, yes, but it would work in a reading (for a reader that was well versed in the Tarot), and as a comparative deck. This is not a deck for beginners, but could be used in meditation, as well as ritual/ceremony work. I found it to be a deck that I connected easily with, and one that brought a smile to my face.