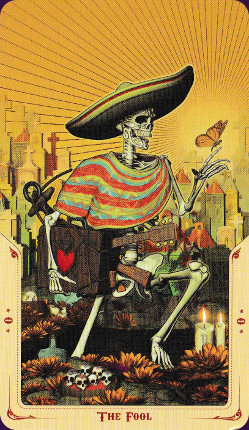 The Santa Muerte Tarot is inspired by a female saint from Mexican religious culture - Our Lady of Holy Death. This 78 card tarot has superb artwork that is ironically full of life, depicting Santa Muerte and her skeleton cohort acting out the Rider-Waite style tarot scenes. 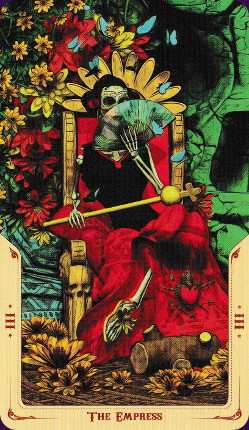 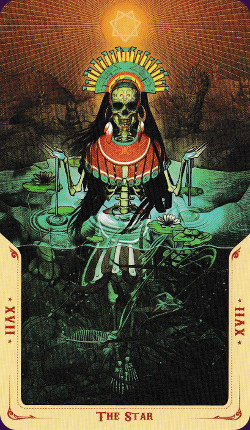 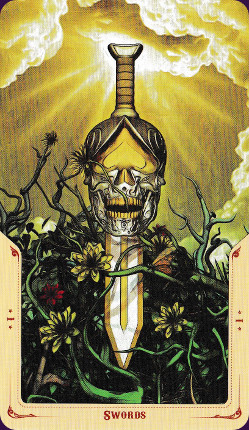 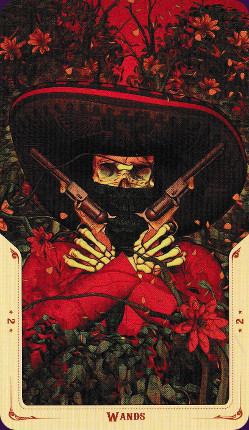 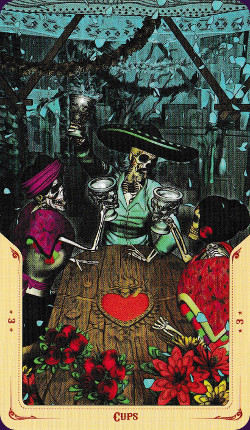 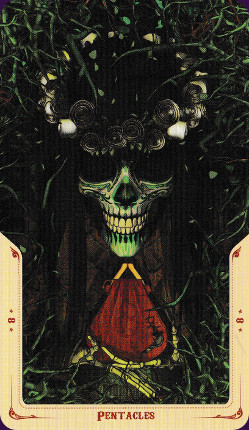 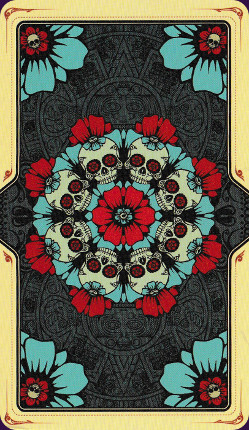 Nuestra Seńora de la Santa Muerte - Our Lady of Holy Death is a goddess or folk-Catholic saint worshipped primarily in Mexico and among Mexican-Americans. Although she is repudiated by the official Catholic church, her ‘cult’ stands as the fastest growing in the world with some reports citing upward of 20 million adherents and counting.

Santa Muerte is a strong deity with powers to influence love, good health, prosperity, safe passage in the afterlife, good fortune, fate, and specific protections against assault, bullets, violent death. She also protects outcasts and those on the margins of society.

In popular culture Santa Muerte appears frequently as a female skeleton in a saints robes or nun’s habit, sometimes she is depicted as a skeletal version of the Virgin of Guadalupe, sometimes as a female grim reaper. She is also shown as an Aztec goddess, a sugar skull, and as (a version of) the Mexican artist Posada’s popular creation - La Calavera Catrina - the skeletal lady with the fancy hat.

Santa Muerte, as she is interpreted for the Santa Muerte Tarot (SMT) is the great equaliser. Not only in the obvious sense - in death everyone becomes equal - but in the sense of supporting a balancing of the scales. Santa Muerte stands on the side of the oppressed and the poor, and against the institutions of government and money which seek to preserve their power through exploitation and oppression.

The SMT is loosely based on the Waite-Smith tarot, and unsurprisingly shows skeletal beings rather than fleshy humans carrying out many familiar tarot scenes. However, it is not only Santa Muerte who appears in these cards, but a whole world of skeletons apparently living the life (!). Santa Muerte and her skeletal cohort don’t spend the entire deck just reaping - bravo to the 3 skeletons sharing a drink, and the gentleskeleton farmer watering his crop of skulls…yes, there is a sly humour as wells a joyous bravado to many of the illustrations.

The Santa Muerte Tarot is a traditional 78 card, fully illustrated deck. It has 22 Major Arcana and 56 Minor Arcana. The Major Arcana features A E Waite’s titles and ordering with the exception of card xiii - Death, which has been re-named Santa Muerte. The Minor Arcana consists of four suits- Chalices, Pentacles/Money, Swords, and Wands; each suit has 10 number cards, and 4 Court cards consisting of a Page, Knight, Queen, and King. Each suit is dominated by its elemental colour: Wands by crimson, Cups by blue, Swords by yellow, and Pentacles by green.

The cards measure 70 x 120 mm which puts them in the range of a standard size tarot deck. If you are used to some of the smaller decks that have been appearing with more frequency such as the tarot-in-a-tin decks, take note that ‘regular size’ cards can feel quite large when you first begin handling them.

The card stock is a good combination of light yet sturdy, flexible yet resistant with an extremely glossy finish. They have a reasonable weight to themThey have rounded corners and clean edges which should help resist chipping and peeling - sometimes the result of frequent or rough handling of the cards. The super-smooth mirror finish on the cards certainly makes them slippery and very easy to shuffle, it also prevents the cards from sticking together. It compliments the saturated colours of the cards and probably gives a certain clarity to the sharp, clear-cut images. The print quality is crisp, clean, clear. The rich colours are both subtle and brilliant, and the hard lines and edges are sharp. There are no misprints, no colour bleeds, no blurry images.

Fabiola Listrani is a digital artist and graphic designer who previously illustrated the symbol-rich, mysterious, and powerful Night Sun Tarot. His artistic style is commercial and has a strong graphic element, which is offset with attention to fine details, complex staging and backgrounding. Many of the details and vivid colours reflect the culture and milieu from which the worship of Santa Muerte emerged. His images are often challenging - asking the viewer to see Death as ubiquitous, inevitable, both mundane and exalted, and beautiful.

Listrani’s palette is quite broad and the colours bright and strong - with brilliant reds, deep greens, and mysterious blues dominating the deck. They set a stark contrast to the stucco and sepia colours of the skeletons and calaveras. The combination of confident execution, strong and certain imagery, and vibrant colours combines to create a powerful tarot deck.

The lower half of each card is fitted with a flat cream-coloured border which gives the appearance of the card being pulled out of an envelope. Major Arcana cards have their title written at the bottom of the border, and the card’s number is given at the side. The Minor Arcana cards have the suit listed beneath the image and the number at the side. All titles are in a western or circus-type font, in flat burgundy. The design on the back of the cards is reversible. It shows a grey Mayan Calendar at each end of the card, and a circle of sugar skulls, blue, and red flowers in the centre of the image. The corners are decorated with bright blue flowers, and a cream border frames both ends of the image.

The cards come packaged in a compact upright box with a fitted lid. The box is constructed of solid cardboard and contains both the cards and the guidebook. It has a polished, glossy finish and is printed with images from the Santa Muerte Tarot, an abundance of roses, and titles and fine details in gold foil. It is small enough to slip into a shoulder bag or backpack without it adding significant bulk or weight, and tough enough to protect the cards and book it contains.

The 128 page guidebook comes with instructions in English, Italian, French, Spanish, Portuguese, Russian, and (I hope) Chinese. The book is a small softcover printed on glossy paper. Full colour illustrations showing details from the cards separate the chapters.

The information opens with a brief biography of Fabio Listrani who is both the artist as well as the author of the guidebook. There is a description of the concepts and ideas which inform the Santa Muerte Tarot. Each card is given equal attention and page space and each card has its own entry; no images of the cards are included.There is no description of the image, or explanation for the action depicted in the illustration, which some may find frustrating. A brief discussion of the positive and negative meanings of the cards is outlined, but no explicit ‘upright/reversed’ instructions are given.Each entry is accompanied by Advice of the Dead - which is usually some form of direct and precise instruction. The Dead don’t mince words. The divinatory meanings fall well within the bounds of generally accepted interpretations, and if anything tend toward a positive outlook rather than doom and gloom.

This is a well thought out, cleverly conceived, and well executed deck. The images are elaborate and beautiful. If you are already a fan of the Night Sun Tarot then you will probably enjoy using the Santa Muerte Tarot. As will readers who have a little experience reading Waite-Smith based decks.

Followers of Santa Muerte, those with an interest in folk-catholicism, Mexican, and Mexican-American popular and folk culture may also find the Santa Muerte Tarot interesting. I wouldn’t recommend this deck for absolute beginners - there is too little information provided about the cards to be of assistance to the tarot novice.

There are going to be people that buy this tarot deck simply because it looks sooooo cool – and it really is. But moving beyond that, this is a deck for people who have already formed a relationship with the dead, and Death, transformation and rebirth, and for those who, through fear or curiosity, wish to.