A tantric oracle deck with Eastern-looking collage artwork and Hindu references. The Secret Dakini Oracle's symbolism draws from many different cultures, as a tantra is a magical path, and there are many different paths. 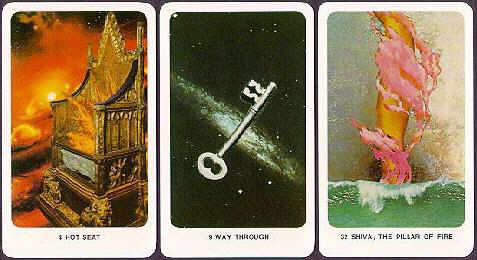 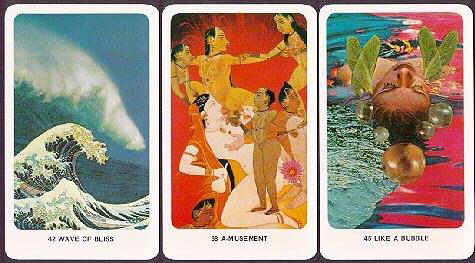 This deck is probably not a beginner deck - it helps to have a diverse background. A background in traditional tarot helps in order to see the Tower card represented in the "Holocaust" card. A background in Thelemic magick to comprehend the "Scarlet Woman" card, as well as why there is a Star Ruby in the "Phoenix" card. And it definitely doesn't hurt to know about about Hinduism to comprehend the Kali images in "Slay the Ego", the purification rite shown in "Purification/ Puja", and who is "Ganesh, Lord of Obstacles". Then a Buddhist background to understand the meaning of the curved knife and the other implements.

Okay, so there's some background knowledge needed, but most of it is vastly able to tell a story on its own and completely unique. "Survival" is a factory in what looks like a desert- the feeling one gets reading this is one of dryness and lack of joy - the times are going to be hardscrabble and the atmosphere harsh. "Asylum" pictures a unicorn sitting in a tree - he's looking comfortable there, but he's not going to be able to stay there long - horses don't stay in trees. "High Tension" is Atlas whose head been exploded by lightning!

This is a very exciting and wonderful deck.. I have used this deck for years not knowing either its title or knowing it had a book along with it and got great readings. This one comes highly recommended - at the least its colorful and charming, even if not everyone will desire to read from it.