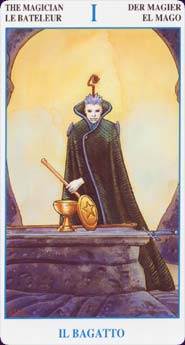 The Secret Tarot has card scenes and costumes that are a mix of eras from medieval and Renaissance to the 19th and 20th centuries. The art is a little comic-book-ish and features female nudity, but is very atmospheric.


Card Images from the Secret Tarot 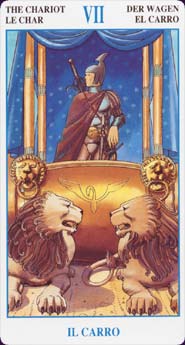 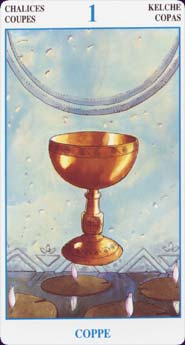 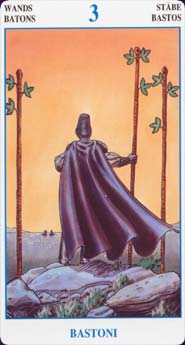 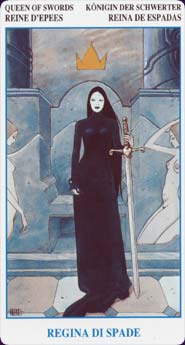 I've seen many lovely reviews of this deck, which I've had since 1997. It was a mysterious, but beautiful deck to me then. I was used to Rider-Waite-Smith (RWS) style pictures with a story theme or Marseilles workalikes with some sort of artistic theme. This was one of my first decks with dark and unusual illustrations.

Now in 2004, I use this deck frequently to fall back on. I can grow tired of certain art themes and want to refresh my ideas. I will usually first try my soft and family-friendly Tarots of the Renaissance by Giorgio Trevisan...if that doesn't suit me, I know that I can go back to my moodier, deep-colored Secrets. The illustrations are rich and I can even pull out the instructions again to enjoy something different.

I have the older English-language edition where the number of the card and the card titles appear in four languages above the picture. The Italian language title appears on the bottom in blue writing. This same edition can be bought through alidastore.com if you can settle for the instructions being in Italian and the picture on the box being the High Priestess.

The English language edition has the Nine of Pentacles on the box cover and similar English language instructions that I first received in 1997. The deck is unique to me in how Nizzoli wrote in a small storyline that seemed to outline a heroic journey for a young traveler. The majors and their scenes are briefly described in the context of the journey. Next, brief two or three word meanings of each major follows.

The names of the court and suit cards with brief one or two descriptions follows. A longer descriptive storyline of each suit as a kingdom, with an affiliated court. The Kingdom of Pleasure for Chalices (Cups), Kingdom of Richness (Pentacles), Kingdom of Sorrow (Swords) and Kingdom of Human Work (Wands).

I like the court cards for their variety and sometimes unusual postures. The Knight of Pentacles in the Crowley Thoth or Rider Waite shows an earthy, distant knight facing the sun or in profile. Here the Knight is truly a "Cavaliere di Denari" facing the viewer with his mighty shoulders, a half-twisted smile and his dark, moody horse has you in his sights with a gleam under hooded eyes.

The charming and ambiguous Page of Pentacles from the RWS decks gazes up at his circle with a star. He is more dynamic in the Secrets Tarot. Our Fante di Denari in the Secrets Tarot has a crouching stance, both lean legs balanced on their toes upon a wall. The small breeze teasing the ribbons on the small cap, an easy supporting hand relaxed and a curving hold on the disk is lively and charming. The figure could be a young male or female. This Fante has a soft yellow sky and a cityscape in the background. Some green rocks or hills illustrate the middle ground and our Fante casts soft shadow cast on the wall in the foreground.

In the queens, if you are used to certain attributes, you will find a few surprises. For instance the Queen of Pentacles, look to the sides of the throne where there are cat-heads or lionesses sculpted in the stone armrests. The Queen of Wands by contrast seems elegant and spare, but her background is an open sky with two delicate green sprouts emerging from her wand.

I found the majors also had some interesting twists. First, the ordering has Strength as eleven and Justice as eight. Strength's beautiful young woman is riding an enormous lion in an strange, shadowy landscape. Justice is a hooded, robed woman with a cloak of red and dark, deep-sage green dress holding up a sword and scales. She sits between large stone pillars and in the background, a bird-like dark engraved insignia is in-between the pillars.

The women and men in this deck can be unexpectedly dressed in full evening wear or romantic robes, semi-clad or uncovered, but they all seem very comfortable and strong in their postures and natural in their attitudes. Many of their poses seem heroic or classic for movie and stage actors and actresses. Each card scene seems to have been fully envisioned in a rich setting, whether it is outside or inside. Every detail from the background color or sky-scape with clouds have light and shadow playing on the figures. And each figure, even if the face is slightly sketchy, is well-integrated into their setting. Some of the cards are quite playful as well as a pleasant, moody twist to the standard RWS style of deck.

My favorites of the numbered suits, Ace through Ten, include some of the twisty atmospheric details. The Ace of Chalices is suspended over candles and casts a slight shadow on speckled wall. The candles seem to be floating on water. Reflected light from the candles show in both the water and the glinting cup.

The Ace of Pentacles can be showing a delicate hand emerging from a frothy robe. Or is the celestial hand coming from a cloud, holding a disk with a five-pointed star? A small castle and a golden sky softly glow in the background.

The Ace of Swords is a sword driven in the stone, with a yellow and blue light to the sky and airy castles in the background. The puzzling figures on the stone or petroglyph seem to show a birdlike creature swallowing a fish--secret and evocative symbols for me to ponder.

And last, but not least, the Ace of Wands has a beautiful sky with soft clouds--again a castle in the distance. In front of a tree-stump, a small rabbit or hare in shadow nestles in the shade, facing the sunlight. At any minute, he will hop or dash away.

Some of my other favorites, briefly: the Two of Pentacles has happy faces carved in the stone underneath the feet of the juggling youth. The Four of Cups shows a delicate and cloudy hand offering a cup while a sleepy, girlish page leans against a tree and three cups are beside her.

The Nine of Swords is one of the most beautiful, moody cards that I've ever seen. The woman drapes her head and arms across the side of the dark blue couch. Her head is resting and pillowed, as if she is dreaming of the glimmering swords above and below her. Even in a dark and solemn night, when all is black above, the couch and her shoes cast a shadow on the grayish-blue ground below.

But the gleaming swords do not cast shadows on the ground and their unusual, floating quality reminds one of an insubstantial dream. The girl, when she awakens, will not see the swords if she raises her head and opens her eyes. Wake up, I say. Will you not see the light that is even evident in the spaces around you? All is not lost...

The card recedes in my vision and I place my hand over it, to replace it in the deck. Some cards from some decks will evoke such mental conversation and inspire stories. For me, this is one of these decks.