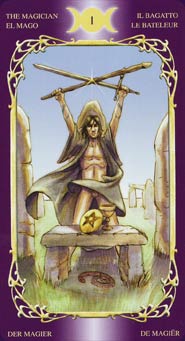 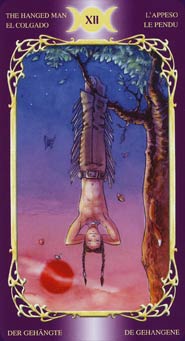 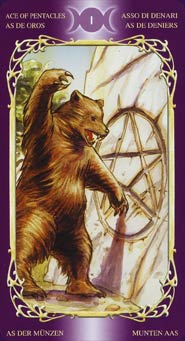 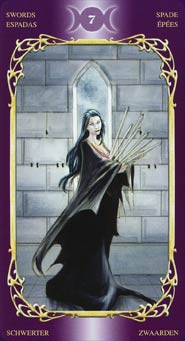 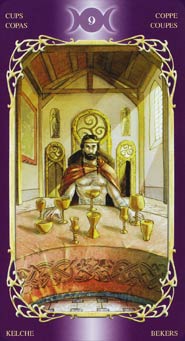 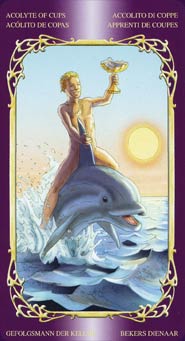 Having been a lover of all the Lo Scarabeo decks, and an owner of almost all of them, I anxiously awaited with baited breath for any of the local metaphysical stores to announce it’s arrival for purchase once it was published and available online in October. (As a working witch it is important to me to keep as many Wiccan dollars circulating locally as possible).

When I got home, I literally stayed up all night studying each card and writing. Then, I spent the next two days looking at and thinking about the cards. Overall, I would call this a Rider Waite Based Deck (a Rider-Waite deck with a lot of bare breasts). The suits in the deck are the same, Pentacles, Wands, Swords, Cups. I noticed that the images of the Swords were the most different than the traditional Rider Waite and especially the 9 of Swords which I studied for a few minutes and found particularly engrossing and will explain why later. I would definitely say sensual and not erotic is an appropriate title for the deck. And although I am experienced enough that I can read the cards without having to look up meanings, I always read the enclosed material to see what the author intended for each card. In this case, I looked forward to reading what Ms. Mesar “suggested” for each card. Ms. Mesar says she can only suggest meanings as a “point of reference” because the reader and querent need to use their “sexual and spiritual experience” to find the meaning of the cards. This is the perfect explanation for these cards. They are a wonderful tool for exploration of sexual feelings and thoughts, but they should be used carefully and in this review I will try to elaborate why. The box says “A Wiccan vision of the world of sexuality”. I am still not quite sure what is “Wiccan” about sex in general, other than the use of the pentacle and pentagram or Wiccan objects in the images of the cards. The 63 page booklet accompanying the deck begins by explaining that this deck is meant to be used by couples, and Ms. Mesar gives Tarot spreads that are to be done sans clothing, Starting with simple to more advanced quests for each partner’s knowledge, (and most unavoidably past sexual history). This is meant to hopefully leading to intimacy, (both physical and spiritual) via questions, thru drawing- and then reading the cards. I find this a unique Tarot idea, but for this to work, Ms. Mesar takes for granted that the couple using this Tarot has reached the point in the relationship where both partners are at the spiritual level of acceptance, forgiveness, and unconditional love. Otherwise, the “Sensual Wiccan Tarot” could initiate a lot of naked fights, The images on some of the cards are beautiful, breathtaking, and unbelievably thought provoking, but as a cautionary warning to the conservative Wiccan, and those in an early stage or unstable stage of a relationship, subjects boldly covered include lesbianism, homosexuality, bondage, threesomes, foursomes, and masturbation. Broaching questions about a partner participating in any of these activities in the past might be something one is not ready to hear whether they realize it or not. In my opinion, this deck would be excellent, and a much more appropriate tool for self sexual examination about one’s past, thoughts, current state, and fantasies before using it naked with a partner. Not all couples are at the proper level of relationship actualization for baring one’s soul at the level this deck requires.

The cards themselves are on somewhat flimsy stock. On a positive note, this makes them a little easier to shuffle, however, they may become worn quickly, unless the communication reaches physical intimacy fast enough to preserve the cards. The back of the card is a spiritual purple/violet, with a nice Wiccan array of the Triple Goddess with pent, and the design is such that the querent would not know if the card was drawn reversed, although I do not think that in Ms. Mesar’s layouts that makes a difference.

There are many similarities yet many differences in the deck from the Rider Waite are the Court cards. They have been changed to Maiden instead of Knave/Page, Acolyte, instead of Knight, Mother instead of Queen, and Sage instead of King. Some of the Major Arcana have been changed. Appreciatively, the Fool is now a lovely confidently appearing young woman venturing out on life’s journey. The Empress has been changed to The Mother, The Emperor is now the Consort, The Hierophant is the Initiator, Strength is changed to Lust, Hermit is the Seeker, The Wheel of Fortune is Time, and Justice is Balance. The Death card is changed to a loving image called Transformation, a female figure bends over caringly an obviously ill figure at bedside. Temperance is simply now the Two Vessels. I feel the card that makes this truly a Wiccan deck, since Wiccans do not believe in the Devil, is the Devil card has been changed to simply, Obsession. I applaud Ms. Mesar on this! The Tower card, sensually is titled Eruption and features a couple in heated coitus with a volcano in the background. Judgement has been changed to Arising and finally for the Majors, the World card is changed to Oneness, with an image of a kissing couple under an image of the Earth, surrounded by astrological signs. In the Minor Arcana, The Six of Wands interestingly, is a female figure. A thought provoking card is the Ace of Pentacles, which is simply a large bear, wildly tearing a pentagram image with his claws. One card I appreciated was the Two of Swords, which instead of the traditional female with her arms crossed, has been changed to a male and female. Also, a fresh approach to the Three of Swords, is no longer a heart with three swords, it is now swords lying on a coffin, somehow disturbing but lovely. The Ten of Swords, which drew me to actually pull out and read the book, has an almost translucent, but certainly highlighted nude figure of a young woman standing in front of a definite authority figure (king?) who is holding a phallic-sword, and there is a crowd of angry appearing knight-in-armor figures with swords drawn in the background. The female is almost hiding her breasts and other areas. This card really had me wondering what was going on in the scene, and it provoked so much thought it was just awe inspiring to me. Is she in judgment of something…the past? Is this a nightmare of vulnerability? She is standing too dignified for that!…..It made me think of how often women are judged for sexual behavior that men are not. Some of the cards that would be so helpful for a couple with children are the Seven and Nine of Pentacles, which feature mothers with children, because that could initiate discussions about fitting in sex with young children and possible Madonna complexes. A last cautionary warning, there are many juvenile images that could be conceived objectionable. There are so many cards I could elaborate on, but I recommend examining the deck for yourself, it is well worth the purchase price for sexual self-exploration, and then couple sexual exploration.

In summary, Ms. Mesar says she had a goal in designing the deck “to explore the themes of sex and sexuality through the Wiccan belief and symbology. It is intended as a tool to facilitate exploration, meditation and communication” and I can certainly say in my opinion she has reached her goal, but the tool should be used carefully and with a loving, cautionary, accepting approach.