Tarot of the Sevenfold Mystery 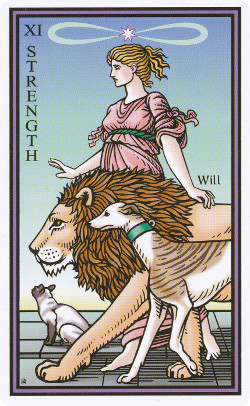 The Tarot of the Sevenfold Mystery is a stunning deck from tarot artist and author, Robert Place. Inspired by pre-Raphaelite art and redrawn in his very recognisable style, it combines powerful art with his extensive knowledge of alchemy. Previously available in an over-sized majors edition, this is a regular-sized, full 78-card deck.


Card Images from the Tarot of the Sevenfold Mystery 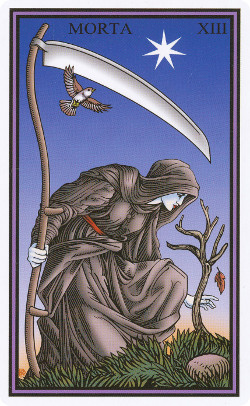 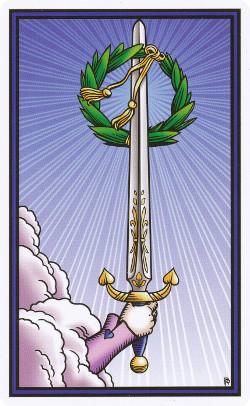 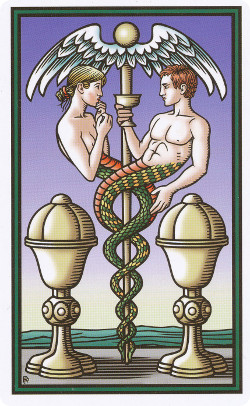 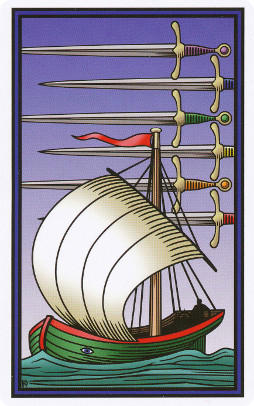 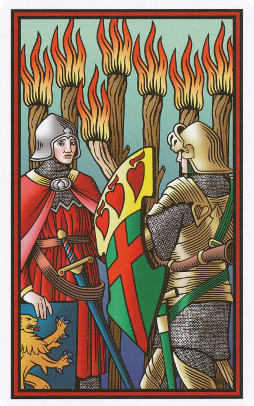 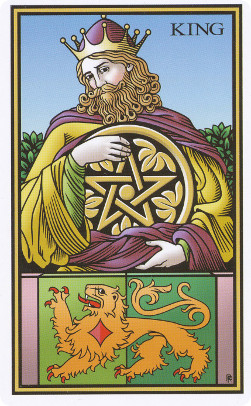 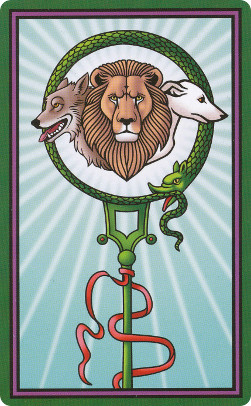 Tarot of the Sevenfold Mystery Review by Stephanie Gill

This deck has some of the most powerful imagery I have yet seen in a deck, which says something if you consider I have been reading Tarot for decades. The art is inspired by the Pre-Raphaelites, in particular the art of Edward Burne-Jones. But it has been redrawn in Place's unique and glorious style, which is accessible to a beginner yet no less deep for the adept.

It has definite advantages over some of Place's previous decks; the card stock is better than his Vampire Tarot. Perhaps this is because Place had more control over the printing. This deck was put out by his own company, Hermes Publications. The card stock for this deck is a nice, thick laminate which is easy to shuffle or cut. They are a comfortable size for your hands, too. My only complaint on that score is that the cards are rather slick and inclined to slip out of your hands.

The LWB (Little White book) is very useful. I appreciate the detail contained within it. Place does say that he will put out a more detailed book at some later point, presumably this will be a trade paperback.

Place again links this deck to alchemical imagery; which is a special interest of mine. But you don't have to know alchemy to appreciate the symbology, or to interpret the images. Though I was a little disappointed to see a couple of the cards repeat imagery from his Alchemical Tarot. For example the Two of Pentacles with the intertwined serpents and the Four of Cups with the Elephant standing on the Vessels, but they are new drawing of these cards and this is a minor quibble.

This deck also has ties to Platonic philosophy, should you want to explore that aspect. There are helpful key writings on some of the cards which tie into that; such as The Lovers, The Chariot, Justice, and some of the other Major Arcana cards. But I do want to emphasize that if you are familiar with the Waite/Coleman-Smith deck, you should be able to navigate this deck fairly quickly.

Some of the reworkings of the deck are simply brilliant; such as the Wheel of Fortune as a Goddess surrounded by the signs of the Zodiac and Prudence within the World. Also this deck restores Justice to eight and Strength to eleven. It is a standard 78 card deck. Oh; and notice the greyhounds scattered through the deck, Place is involved with greyhound rescue. They are a nice touch, and not at all intrusive within the imagery of the cards.

All in all, this is a lovely deck which is well worth having. I find it truly inspiring. I treasure my copy already.


Tarot of the Sevenfold Mystery Review by Kathleen Meadows

If you have ever worked with Robert Place’s Alchemical Tarot deck, you would immediately recognize his work in this 2012 released Tarot of the Sevenfold Mystery. Both decks include symbols, characters, objects, animals and elements which are depicted using vibrantly coloured images, heavily outlined in black. Not intended to be realistic, the images suggest simplicity (albeit misleading!); reminiscent of a child’s colouring book. The deck has the feel of an antiquated tarot deck which according to Robert, was a deliberate contrivance. He is a great lover of the Renaissance. A time, as he points out, when the Tarot mysteriously catapulted onto the Italian, aristocratic scene. This Tarot deck resembles a treasure passed down from your ancestors. It should be dog-eared and faded. Secretly I look forward to a time when mine looks a little beaten up. I am using it daily but the deck itself is so well varnished and solidly constructed that I despair of how long it’s likely to take before it looks a little used, never mind antique.

This deck however could mislead in its simple presentation. There is nothing simple about this tarot deck. The symbolism is rich and complex; every aspect of each card has been crafted with careful and intelligent mindfulness. Don’t let that scare you away from this deck however, because Robert has kindly put some text onto a few of the more complex cards to help you understand what the symbols mean. For example, the Sun card. The Sun card, which Robert has named Apollo for obvious reasons, depicts a mermaid from behind, as she regards the God, Apollo before her. Apollo is face on and the text beside the mermaid reads, “reason”. The text beside Apollo reads “logic”. In his accompanying book, Robert explains, “She is reason and He is logic. The divine logic behind human reason, they join in the hero’s gambles (define marriage). This union can represent spiritual love, a soul mate, marriage, or enlightenment.”

Although Robert has assigned an original meaning to the Sun card, his explanation takes the reader down a whole new and exciting interpretation of this card. His symbols make sense, and his explanation is thoughtful, succinct and intelligent.

But Robert doesn’t handhold the reader by any means. There are cards in the deck that have absolutely no text. The PIP cards for instance have no text or numerical values to identify them. I get a sense that Robert is playing with us! He seems to be saying this is a deck without redundancy. If you know the tarot, you can count and you don’t need to be told what number of cups, wands, swords or pentacles you are looking at. Why clog a perfectly balanced image with redundant and distracting text?

The deck comes with, as is typical of tarot decks, a small, accompanying booklet. And it is tiny! So tiny in fact, that I put it through a photocopier to enlarge it for reading comfort. But it was worth the effort. Robert has offered assurances that he is writing a complete treatise to explain this deck in greater depth in the future and I am already anticipating its release. The text to explain his Alchemical Tarot was just released in 2012.

Robert’s introduction to the sevenfold ministry in the booklet is an article you don’t want to miss. Choosing a passage to quote was challenging but I did think this piece was a good representation of the riches you’ll find here. In this passage Robert explains why the number “7” is central to this deck, “The seven planets were thought of as the sole centres of the cosmos and corresponding sole centres could be found ascending the spine, from the sacrum to the crown of the head, in the microcosm of the human body. Pythagoras developed the diatonic music scale with seven notes to capture the sound that each planet made as it orbited the earth. This was called the “music of the spheres.” He marked each know with one of the seven vowels of the Greek alphabet and through musical treatment use this skill to bring the human soul centres into harmony with the planets.”

Well written, deliciously historical and an academic bit of esoterica, this little book is a treasure.

My favourite card is Fortuna. Fortuna (Wheel of Fortune) features a blind-folded female character circled by a collection of detailed characters, animals and symbols. When viewed closely, you are rewarded with a vision of astrological symbols. Colourful, mysterious and priceless. Immediately I was reminded of Cynthia Giles’ description of the Tarot as a collection of “archetypal tinkertoys”.

As a tarotist, I am grateful that Robert puts his rather impressive intellectual rigour into creating a tarot work. Your collection of tarot decks will not be complete without this one. Many who purchased Robert’s Alchemical Tarot in the past were grateful they bought one when they were available because long after they were sold out, there continued to an ever escalating demand to own one. Now if you would like a copy of that deck, you’ll be faced with paying rather impressive “collector” prices. So while supplies last, I would encourage you to purchase this latest and no less impressive body of work. It’s Renaissance, mysterious, complex, artful and so quintessentially Tarot. What more could you ask for from a tarot work?


Complete Details of Tarot of the Sevenfold Mystery


Similar Decks to Tarot of the Sevenfold Mystery