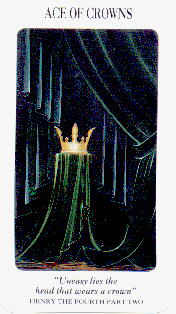 Based on Shakespeare's many and varied plays, the Shakespearian Tarot deck shows Romeo and Juliet as the Lovers, Hamlet as the Hanged Man and Lear the Hermit. Each card has a quote from a Shakespeare play which matches the image.


Card Images from the Shakespearian Tarot 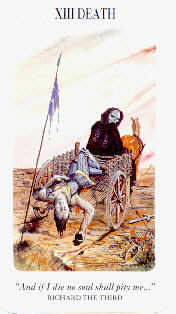 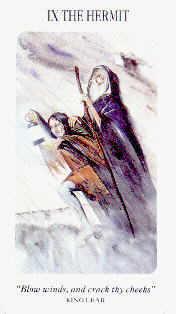 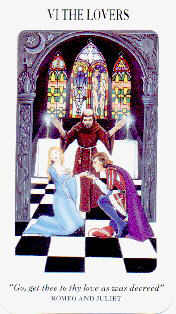 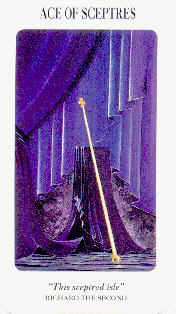 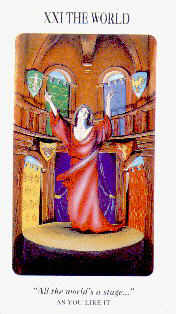 The Shakespearian Tarot was created by Dolores Ashcroft-Nowicki, who also designed the Servants of the Light deck. It is intended to be a working tarot deck which will appeal equally to tarot enthusiasts and to lovers of Shakespeare. The rich illustrations by Paul Hardy, quotes from Shakespeare and Dolores' expertise in the Tarot somehow fail to come together into the expected masterpiece but leave us with a fascinating, intriguing and sometimes frustrating deck.

The Shakespearian Tarot (which is currently out of print) comes as a deck and book set in a substantial cardboard box. Each card has a title giving its place in the tarot deck, eg III Empress, or Two of Swords; a picture depicting a scene from a Shakespeare play; and a quotation from that play. The book gives information about the plays, the reasoning behind the choice of image for each card and upright and reversed meanings. The meanings tend towards divination rather than personal development.

The cards are thin and flexible and have an almost silky surface. They are unusually narrow and fit snugly into the hand which makes them seem to demand to be held. The backs depict a woodcarving in warm browns. They are not reversible.

The pictures are in rich colours but have been greatly reduced to fit onto these small cards thus losing some detail in the process. They appear less vibrant than the pictures online.

The major arcana follow the Rider Waite system. They include some truly inspired cards such as the Magician as Prospero saying "Now does all my project gather to a head" and the Tower as the Tower of London seen from the inside as the princes are hurled out of it. Temperance has an allusion to the song in Much Ado about Nothing: "Sigh no more, ladies, sigh no more,/ Men were deceivers ever" which will forever bring the Branagh version of this play to my mind. All these cards cause me a stomach-clenching feeling of instant recognition.

Unfortunately, the minor arcana are less clear. Dolores Ashcroft-Nowicki had far more trouble with these, she tells us in the book, and this is evident in the cards. Cups and pentacles are Crowns and Orbs respectively, or they probably are. We are not told what the correspondences are, and at times there seems to be some confusion between these suits. The ten of orbs has Romeo and Juliet on it, as ‘the happy ending card’ which sounds like the ten of cups. The seven of crowns is about choosing and not being taken in by illusions which sounds like the seven of cups. All the suits have some connection to sovereignty which restricts the meanings somewhat. Most of the meanings sound rather definite and divinatory and tend towards the negative.

Despite these niggles, this is an amazing deck. I love the sensuous-feeling cards and some of the wonderful (if small) pictures. I am also enjoying reading the book. However, I haven’t been able to decide as yet what place the Shakespearian Tarot will occupy in my tarot collection.