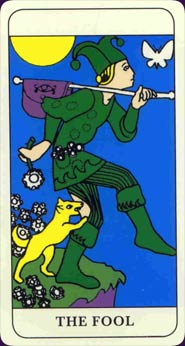 The Sheridan-Douglas Tarot is a 2006 reissue of the Sheridan Tarot from 1972. The coloured, Rider-Waite based cards are originally from a book by Alfred Douglas, The Tarot: The Origins, Meaning and Uses of the Cards.


Card Images from the Sheridan-Douglas Tarot 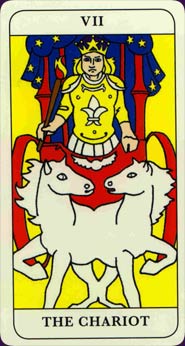 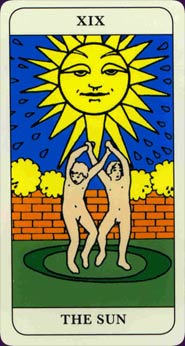 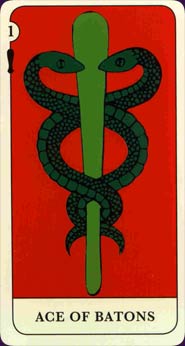 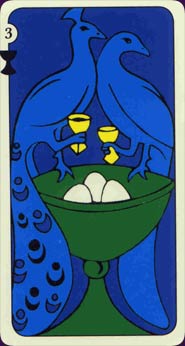 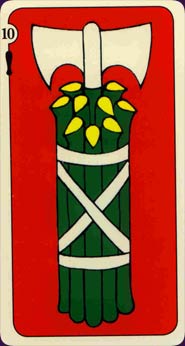 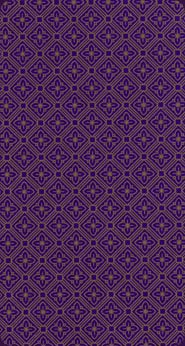 The "Sheridan-Douglas Tarot" is a reissuing of David Sheridan's 1972 Tarot deck, which is based on the black and white images from Alfred Douglas's book "The Tarot: The Origin, Meanings, and Uses of the Cards". It follows the European traditional numbering with Justice as VIII and Strength as XI. The court cards are King, Queen, Knight, and Knave. Three of the Major Arcana cards carry titles referencing earlier Tarot decks: Papess (High Priestess), Pope (Hierophant), and Fortitude (Strength).

The LWB (Little White Book) that accompanies the deck is not a book, or even a booklet (pamphlet) - it is a single sheet of paper, 10" by 17", folded to the size of a Tarot card. One side, entitled "What the Cards Mean", carries a chart of the Major and Minor Arcana, with upright and reversed meanings for each of the cards, with no scans. The other side, entitled "How To Consult the Tarot" (authored by Alfred Douglas), presents two spreads: a thirteen card "Circular Spread" (used as a general forecast for the future), and a five-card "Mini Spread" (used for answering specific questions).

The cards themselves are approximately 2 1/2" by 4 1/2", of good quality, glossy card stock. The backs of the cards are purple, with a repeating diamond pattern. It would not be possible to tell an upright card from a reversed card. The card faces have a 1/4" cream border, followed by a thin black border. The Major Arcana carry the card number, in Roman Numerals, at the top of the card (black numerals against a cream background), with the card title across the bottom of the card (black lettering on a cream background). The Fool carries no number. The Minor Arcana carry a 1/4" cream border, followed by a thin black border. The card number, for the pips, is at the top left hand side of the card, with the suit graphic beneath it. For the Aces, the number and suit are written at the bottom of the card (black lettering against a white background). The pips do not carry a written suit name. The court cards carry the title and suit in black letting against a cream background at t he bottom of the card. On the upper left hand corner of the card is a glyph indicating the rank.

The artwork appears to be line drawing that have been colored in. The colors themselves are intense, and solid (as opposed to shaded). The colors used are green, blue, yellow, white, lavender, red, orange, purple and black. The artwork, for the most part, is realistic.

There are several cards that attract special interest. The Fool is presented facing the right hand side of the card, which is generally considered to represent the future. His attention is on a white bird in the sky as he prepares to step off the cliff. The Empress sits next to a cornucopia of fruits and vegetables - the harvest of the land. Above her head, in a semi circle, are the twelve stars of the Zodiac.

The horses drawing the chariot draw our attention in the card of the Chariot. Both horses are white, and joined at midsection. They face each other. Death is quite interesting, showing a skeleton welding a scythe, with the head of a King, a female head, two feet and two hands coming up from the earth. he Sun shows two children, in front of a brick wall, dancing on the grass in the middle of a circle.

The Ace of Batons very much resembles a caduceus, with two snakes wound around the Baton. The Ten of Batons shows nine batons bound together around a tenth baton, which acts as a handle for a double headed ax. The Three of Cups shows two birds, each holding a golden cup, hovering on the edge of a third cup holding three eggs. The Three of Swords shows three arms, in red, wielding three swords, which are also red, against a black background.

I found this deck to be well done, with the imagery very much following the Rider-Waite-Smith tradition. This deck could easily be used for readings, as well as for meditation and journeying, and would be suitable for beginning to advanced readers.