The Shining Angels Tarot is a round deck of 78 cards, with watercolour images of individual angels in tarot scenes. The round shape of the cards was chosen to remind us "of the angelic circle of love and protection always surrounding us". 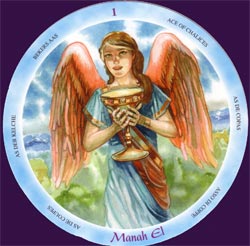 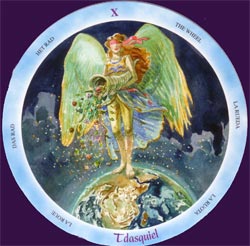 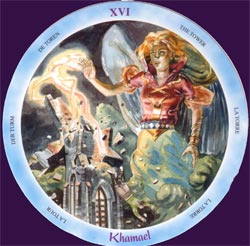 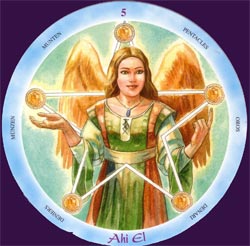 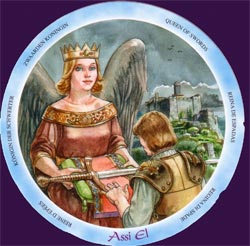 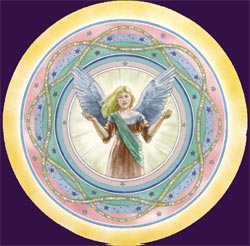 This deck is certainly the who’s who of the angelic realm. So for a study in the angels themselves this deck is worth pursuing. I would use this deck in the study of the any magical system where the angelic world functions highly. We also find the angelic realm in correspondence to the astrological decans and to the Tarot itself. So working this deck could lead us into many other fields of study. I believe this is its strength.

This deck has been widely researched by Guidetta Dembach in ancient Hebrew texts. I think it is deliberate that many of these angelic beings are not well known and I believe the intent of this deck is as a basis to launch a study program for those interested in the abundance of angelic light beings named in Hebrew teachings throughout history. I thank Guidetta Dembach for such in depth research; the angel’s names are authentic and ancient.

Its blue washed out appearance gives this deck a slight otherworldly appearance. I do find it lacking in vibrancy as if its characters are just not quite within reach and perhaps too human. I also feel the sections of the Tarot; Major, minor and court are irrelevant in this Tarot as it is more about specific angelic beings corresponding to element and numerological vibrations than journeys through life processes.

With time I would find this deck enormously enlightening. It has certainly sparked my awareness of the enormity of the angelic realm and made me question what that realm adds to the magical levels of study. Frederico Penco has been involved in creating other Tarots, namely the current Sacred Sites Tarot which is beautiful but again I wouldn’t call it a process orientated deck. Perhaps Frederico Penco and Guidetta Dembach are asking us to study more deeply what can be contained within Tarot.