Tarot of the Sidhe 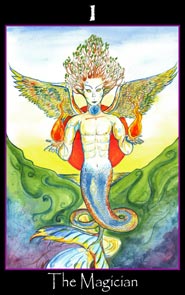 The Tarot of the Sidhe has 78 cards with original, colourful Faerie paintings. It was sold-out as a majors-only set from Adam McLean, and has now also been published as a full 78-card deck by Schiffer Books.


Card Images from the Tarot of the Sidhe 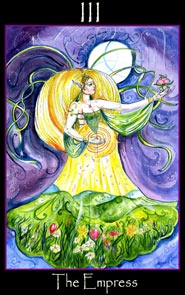 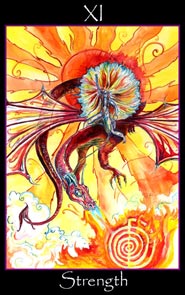 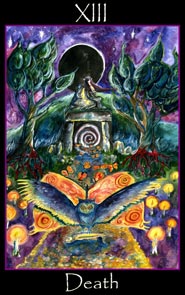 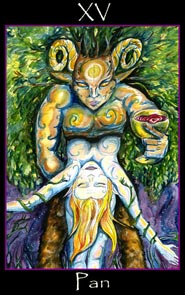 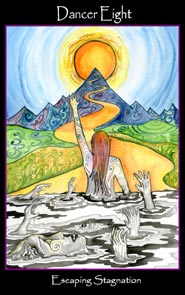 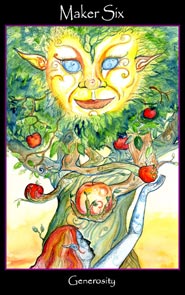 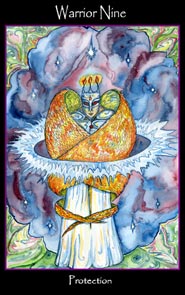 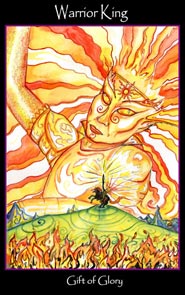 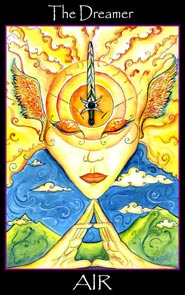 Tarot of the Sidhe Review by Bonnie Cehovet

I had a red letter day this past week – two packages in one day (Karyn Easton’s “Tarot Lovers Diary”, and Emily Cardings “Tarot of the Sidhe”)! My calendar is chock full of things waiting to be done, but I kept sneaking back for more looks at the enchanting Sidhe. Pronounced “Shee” (I won’t even tell you how I was pronouncing their name!), this deck is based on otherworldly beings known as Sidhe. In his foreword, John Matthews describes them as figures of great power, with a deep and lasting connection to our world. He sees them as being wise, sometimes tricky and elusive, but always noble.

This is a traditional 78 card deck. The Major Arcana retain their traditional titles, with the following exceptions: the Hierophant becomes the Elder, and the Devil becomes Pan. Justice is VIII, Strength is XI. The four suits are: Dreamers (Water), Warriors (Fire), Dancers (Air) and Makers (Earth). The Court card titles are King, Queen, Prince and Princess.

The deck and 96 page companion book come in a sturdy cardboard box with a lift-off top. The cover shows the imagery from the Sun. One side of the box indicates that the cards can be used for divination and meditation, to enhance intuition, and to strengthen the connection with the Sidhe Otherworld. The other side of the box gives information in the deck and companion book. I truly appreciate quality packaging, which is exactly what this is!

The companion book includes a foreword by renowned Celtic folklorist John Matthews, and an introductory section by Emily Carding on how the deck came about, and her deep connection with the Sidhe. Each card is presented in text only, with the Major Arcana carrying the speaking voice of each card, along with keywords and artist notes. The Minor Arcana Pips (numbered cards) and Court cards show a short poem, along with keywords.

Now the mind is split in twain,
The glorious whole is seen to wane.
And two thoughts now must find a path,
To bring both peace and conquer wrath …

At the back of the book is a section on reading with the cards, including the following spreads: the Pentagram Career Spread, the Hexagram Relationship Spread, and the Septagram Spread of the Whole Self. There is also information on meditation, and a special gift in the form of a song that Emily wrote one beautiful spring day, entitled “Song of the Sidhe”. Thank you, Emily!

The cards themselves are 3 ˝” by 5”, of quality card stock. The backs are a solid black, with a center image in gray of the Great Glyph of the Sidhe. It is another great gift from Emily, in that it acts as a gateway to connecting with the Sidhe. This glyph fascinates me, as it brings to mind the spiral that we see in so much esoteric work, as well as a labyrinth, and, to a lesser extent, a Reiki symbol. The card backs are not reversible.

There was no sketching or planning on the cards – they were drawn quickly to capture the fluid nature of the realm and the Sidhe. Basically, these are channeled drawings, and they are extremely powerful. Each of the Major Arcana cards includes the Great Glyph of the Sidhe, which is intended to act as a gateway into the card for visualizations purposes – to connect with the archetypal energy.

The coloring in this deck is intense, each card speaking in its very own voice. There is a great deal of esoteric imagery, which more than likely was not intentional, but came through because of the subject matter. You are drawn into each card as a participant, rather than an observer. One of the things that I noted is that the eyes changed from card to card. Some of the eyes were white, with no pupils, some were regular eyes, and some were just hard to see.

One of my favorite cards is the High Priestess. Here we see a female figure, standing over a body of water, her skirts flowing into the water, with small fish swimming around her . In her hands she holds a rainbow, while behind her we see mountains. The Empress is presented somewhat along the same lines – she wears a yellow and green dress, with her green skirts flowing into a pastoral type setting with rolling hills and beautiful flowers.

The Emperor is done in bright red, orange, and yellow, showing a nature that is consistent with who he is, but not usually portrayed in this fashion. The Maker Prince shows a male figure, kneeling in the forest, with a dog at his side. The Dancer Ten shows an outdoor scene, with columns of red, yellow and green light, under which we see a group of figures, all in a circle, with their hands held up, palms towards the center of the circle.

The Warrior Seven is a powerful figure that stands, facing away from the reader. He/she holds a sword over their head with both hands. Flames flow from the sword towards the sky. In the background we see other warriors lined up, backlit by the sky. The Dreamer Seven shows a circle of ghost-like figures surrounding a young man dressed in green. To the left we see a barren tree, backed by a night sky and a full moon.

This is an incredible deck! The Sidhe will take you places that you only imagined – each time you look at a card, they will take you somewhere new and different. Honor them, and they will honor you.


Complete Details of Tarot of the Sidhe


Similar Decks to Tarot of the Sidhe

Home > Decks > Tarot of the Sidhe