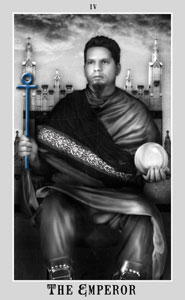 The Silver Era Tarot is a "new-age interpretation of classical ideas, historical ideas updated through technology and 21st Century artistic breakthroughs and change". It is a full 78 card deck modelled on the Rider-Waite, and has collaged, mostly monochrome, photographic art featuring real people. 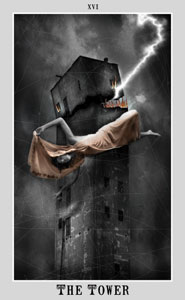 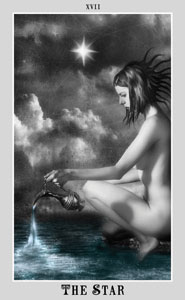 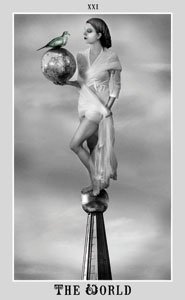 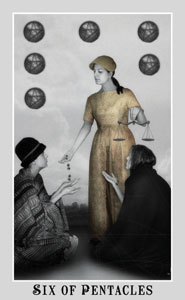 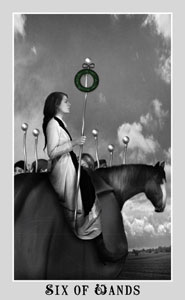 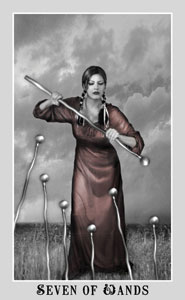 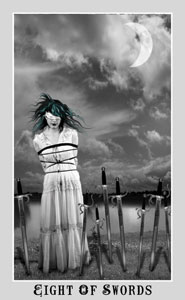 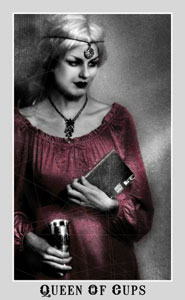 I kept running across references to the “Silver Era Tarot” so often that I just had to see what this deck was all about! It is very unique, and I am very drawn to it – I keep picking it up to sneak peaks at the cards, or to read a bit more in the companion book. I am one of those people that play with the cards first, then check the book out. The LWB (Little White Book) that accompanies this deck IS actually a little book – it is in book format, has a spine, and the inside pages are nice and glossy. Point in favor of the publishers!

The two-page introduction to the book is written by both the author and the artist, and has a lot to say for itself. Here we find that the original concept for the deck (which started out as a majors only deck, and grew to the final 78 card version) came from Aunia’s desire to study the background, symbolism, and meanings in the deck in order to learn the Tarot, and be proficient in reading the cards. She brought her own artistic style and feel to the deck, and made the decision to create a unique journey by using herself as the model for all of the female figures in the deck. (I would like to note here that many figures that are traditionally male have become female in this deck, including the Fool, the Magician, Hierophant, Charioteer, the Hermit, Death, and the Pages and Knights of the Court cards. The male figures that are in this deck are modeled on the author, Russell J. Moon.

The writing of the companion book (LWB) became an interesting journey itself, as the author and the artist were coming from two very different belief systems. Aunia had a Catholic upbringing, but grew to question the relevance of organized religion. Her choice was to settle on just being “spiritual”, rather than following any one given religion. Russell grew up in a Christian household, where things such as the Tarot were simply not discussed. He did not have the same questions that Aunia did, but he did want to follow his intuitions, some of which were energy practices such as Reiki, and other people’s interpretations of a higher power.

After years of studying and dissecting traditional interpretation for the Tarot, along with various author’s interpretations, the decision was made to leave some traditional meanings, and combine their differing understanding on the meanings for other cards. Their hope is that this deck will ignite the Seeker’s own journey to self-discovery.

The deck and LWB are presented in a heavy duty cardboard box with a magnetic lift up lid on top. There is a short ribbon attached to the box top to help lift the lid. I really like this feature, which is appearing with many of Schiffer’s decks. It ensures that if the box is accidentally turned upside down that the cards and the LWB remain intact.

The book, as mentioned above, IS a book Yes! There is a two-page introduction in the front, with templates for single card and three card spreads, along with the traditional ten card Celtic Cross spread. At the very end are biographies for the artist and author. The cards are presented one to a page, with a small black and white scan, a short description of the card, the upright and reversed meanings, and keywords. There is a prelude to each of the four suits, explaining the energetic function of the respective suit.

The deck is traditional in nature, with traditional names for the Major Arcana, Strength at VIII and Justice at XI. The suites are Wands, Cups, Swords and Pentacles. The Court cards are Page, Knight, Queen and King.

The cards are good quality card stock, 2 ľ” by 4 ˝”. The backs show a gray and white diamond pattern, with a medium gray outer border, followed by a slimmer, darker ray border. The card faces show a light gray border, followed by a slender white inner border. The imagery is gray and white, with a color focal point in each card (which differs from card to card). The Major Arcana show the card number in Roman Numerals at the top of the page, with the card title across the bottom. The Minor Arcana Pips (numbered cards) show the card number and suit in text across the bottom of the card. The Court cards show the title and suit across t he bottom of the card.

Some of the imagery in this deck is very traditional, some of it is very unique. Some of the less traditional imagery would include the Fool, which shows a female figure in a lovely ruffled dress (the same figure is shown lyin down as Death); the Magician, which shows a female figure with a wand in one had, appearing to read a tablet that she is holding in her left hand; and the Hierophant, which is shown as a solo female figure. The Charioteer is female, with the horses, one dark and one light, facing in different directions; the Hermit is a female; the Tower shows one female figure falling, with the figure being outsized in relation to the Tower itself. The World shows a female figure standing on top of a spire, holding a globe in her right hand, with a bird sitting on top of it.

The more traditional imagery would include Strength (although she is seated beside the Lion, and not taming him), Justice (with her sword and scales), the Hanged Man, Temperance, the Star, and the Three and Four of Swords.

A couple of the cards did not appeal to me at all, including the Sun (which is shown against a cloudy sky), the Empress (who is shown seated on a black and white checker-board floor, holding a male head in her lap), and the Ten of Swords (which shows the swords going into the front of the figure, as opposed to the back).

Cards that really did appeal to me included the Fool, the Magician (I loved the lemnescate that appeared throughout the deck!), the High Priestess (shown leaning on one of the pillars, wearing a lovely flower print dress!), Death, the Ace of Cups (with the little Hummingbird poised over the cup), the Four of Cups (which shows a female figure looking none too happy!), the Nine, Ten and Queen of Cups, and the Four of Wands.

Most people know that I am edging away from reading professionally, but I would offer this deck to a friend or client that I was reading for. It would also appeal to collectors, and to all levels of readers. I would also have no problem using this deck for ritual or journey work. It is a gentle deck, and presents its wisdom in a gentle manner.

There are decks that set out to be "Gothic" and others that have unintentional Goth appeal – the Silver Era Tarot falls into the latter category. This is a photographic tarot, and Silver Era presumably refers to the Silver Gelatine process which dominated black and white photography from the 1880’s until the 1960’s. With brooding skies and a moody, mysterious atmosphere, the scenes in this deck occupy a strange world where present day melts into pseudo–historical vignettes. Originally conceived as a way for photographer/artist Aunia Kahn to understand the tarot, the project soon expanded into the creation of a complete 78 card deck. Kahn has used herself as the primary model in the photos, however specifically masculine cards and cards featuring couples also use male models.

The Silver Era Tarot is a reimagining of the Rider Waite Smith standard with no deviations – 22 Major Arcana with no renamed cards, 56 Minor Arcana with no changes to the Suits (Cups, Wands, Swords, Pentacles) or Court cards (King, Queen, Knight, Page). Each photograph takes several elements such as positioning of the characters, costume, setting, or perhaps a piece of jewellery from Pamela Coleman–Smith’s original images and incorporates them into a black-and-white photographic tarot card. In addition to this each picture has a single colour highlighting an element – sometimes as large as a body of water, sometimes as small as a pendant, but always elegantly effective. While the images can initially appear quite stark, a close examination reveals the beauty of these cards. Far from detracting from the power of the images, the black and white medium adds to the ethereal quality and faintly foreboding sense of this deck.

The cards measure 73 by 113 mm – which makes them a fairly average sized deck. As with all Schiffer tarot decks the card stock is excellent. These cards are a little heavier and thicker than most, and perhaps a little less flexible as a result. The cards are finished in high-gloss, however this does not make them sticky or slippery – they shuffle easily. The print quality is excellent – the images are clear and the integrity of the prints have been faithfully reproduced - these black and white photographs have a gorgeous depth of field, and exhibit the rich and subtle tones that can be captured in this medium. Each image has a broad silver–grey border, the (tiny) numbers are at the top of the card, and the titles in black at the base. The print on the back, a diamond pattern in Dove-grey, is fully reversible.

The packaging is, as always with Schiffer, excellent. The box the cards and guidebook come in is compact, solid cardboard; the finish is pale grey and glossy, printed with information, and reproductions of several Silver Era Tarot cards. The lid is held shut with strong magnetic clasps, a pale grey ribbon loop is provided to open the box, ribbon hinges hold the lid in place when it is open. The guidebook sits atop the cards. This nifty little box can easily be slipped into a bag or backpack, and is sturdy enough to withstand considerable manhandling.

The 96 page guidebook is scarcely larger than the cards… Printed on glossy paper, with photos of each card. There is a small description; followed by upright and reversed meanings, and a "Keywords" summary. The information is largely based on the artists understanding of the cards. While the wording is individualistic the essential meanings do not stray from standard interpretations. Three basic layouts are included - Card of the Day, 3-card draw, and the Celtic Cross.

If you are looking for an alternative Rider Waite Smith–based deck then the Silver Era Tarot is a serious contender. If you are a fan of black and white photography, or are looking for a deck with a genuinely *alternative*vibe to it, if you are a Goth looking for a tarot it is not another twee wanna-be-Goth deck then look no further than the Silver Era Tarot. While it is probably not an ideal deck for beginners, it is certainly a workable deck for Rider Waite Smith users. This tarot is an unselfconsciously wholly original deck. It has been carefully and lovingly created and the payoff is a truly unique tarot.