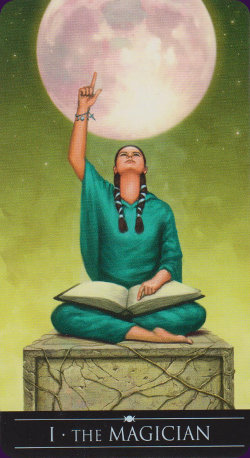 The Silver Witchcraft Tarot merges tarot with modern pagan symbolism and magickal understanding. Illustrated in deep, atmospheric colour, it has a multicultural cast of robed characters set in glorious nature-based scenes. The 78 borderless cards are enhanced by silver metallic edges, and there's also a companion book by Barbara Moore. 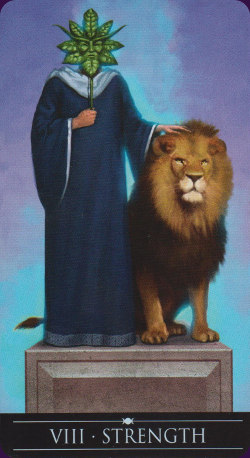 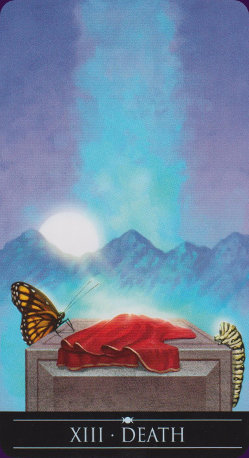 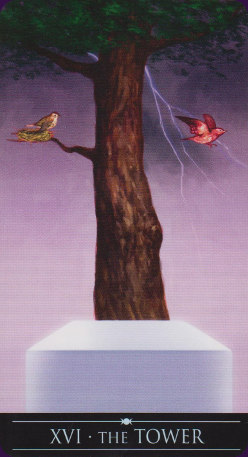 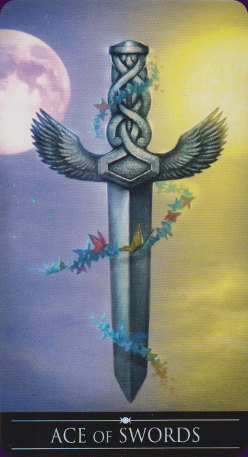 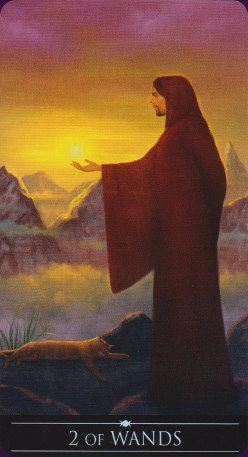 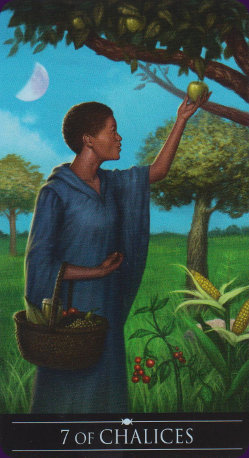 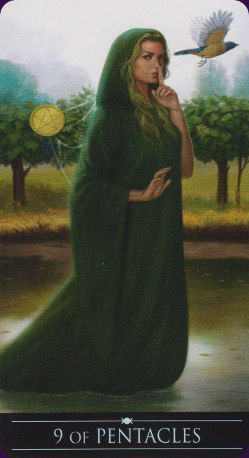 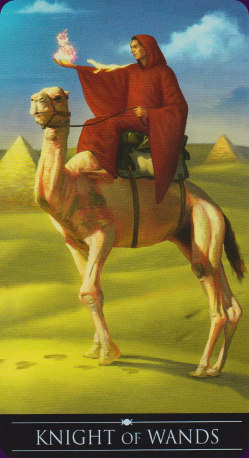 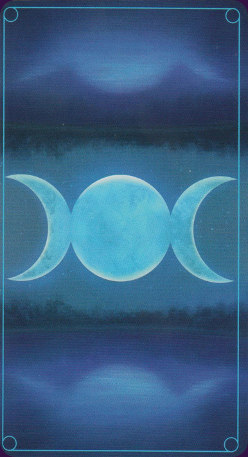 The Silver Witchcraft Tarot aims to bridge a gap between traditional Rider-Waite-Smith (RWS) tarot imagery and the world of “magical spiritual understanding”. This is a deck that is visually stripped down to the very basics of tarot imagery, and shorn of all but the most fundamental RWS symbolism. It has a strong emphasis on colour-coding - greens, blues, purples, and browns dominate this deck - although there is no guide as to what the exact significance of these colours is. Presumably you assign meaning for yourself.

The Major Arcana is very sparse in its imagery. All the tableaux are situated on a plinth - which may or may not be referring to an altar; a symbol for the element of earth; a reference to Ceremonial Magic, Kabbala, or alchemy. Or it could simply be a stage for a scene. The bulk of the cards refer explicitly to RWS images, but there are some departures, most notably The Chariot - a couple holding a baby aloft, The Devil - a mirror reflecting a dead tree, Judgement -which is supposedly stars and rays of light but looks like a design for tribal tattoo, a little out of focus. There are other less traditional images for some of the Major Arcana - the Moon and the Sun are human figures, and Death, rather beautifully, is shown as a discarded robe lying on the plinth, a butterfly and caterpillar nearby. There is a lot of what I would call ‘meditative space’ in the Silver Witchcraft Tarot’s Major Arcana. The absence of heavy symbolism (which are also trance-state devices) in the background forces the viewer’s attention onto the foreground image, without distraction. The colours used for these spaces are quite restful and conducive to a meditative frame of mind.

The Minor Arcana cards are a little less sparse with their imagery. The suits used are Wands, Swords, Pentacles, and Chalices. They aim to show ‘witches’, pagans, Wiccans in idealised ‘everyday’ scenarios. With a strong emphasis on pagan (specifically Wiccan) belief, a multicultural cast is shown communing with the natural world, meditating, celebrating seasonal changes, and participating in traditional Wiccan sabbats. Some of the tropes border on new-age cliches - crystals, dolphins, moonlit skies both day and night. Characters in the cards are clad in monastic robes - which would be okay for a few cards, but it is the wardrobe of choice for most of the deck’s characters, and after a while they begin to look less spiritual and more like members of a cult.

The cards themselves are quite spectacular. They measure 66 x 121mm which is fairly standard for tarot decks. The card stock is good, flexible and extremely glossy without being slick or slippery, and they shuffle very well. The printing is clear, clean, and has deep lovely colouring. The deck is edged with gleaming silver-gilt, very beautiful indeed, though how it will last through repeated handling remains to be seen. At this point there is no evidence of silver residue wearing off or the tell-tale sparkle of poorly applied gilt on my hands - a good sign. The images are borderless, with all titles given in English on a black bar at the bottom of the card.

The cards come in a large box of heavy cardboard with a fold-back lid that fastens with magnets. It has a well for the cards to sit in, and a ribbon which helps to lift the cards out, the Silver Witchcraft Tarot book sits on top of this. The cards do not have separate packaging for ease of transport, so unless you intend to take the box-set everywhere, and it is sturdy enough for this, then you will have to provide your own tarot bag or case.

The guidebook to the Silver Witchcraft Tarot is by Barbara Moore, who has written some of the best tarot books currently on the market. Moore is extremely knowledgeable and always innovative with her tarot interpretations. The book is 157 pages, glossy, and offers a full colour reproduction of every card. Chapters include an Introduction, Tarot Basics, How To Do A Reading, Other Uses For Tarot, The Major Arcana, The Minor Arcana, Court Cards, and Spreads. Each Major Arcana gets two pages that includes a Description, Reflection, Key Words, and a Reversed Meaning. The Minor Arcana get a page each, with, strangely enough, more information per card than the Major Arcana cards - a Suit Meaning, Number Meaning ( this relates to a Wiccan sabbat), Traditional Meaning, Season, Description, Keywords, Reversed Meanings, and a small meditation.

Barbara Moore also includes nine tarot spreads - ranging from a simple one card draw to more complex spreads. Given the Wiccan/witchcraft focus of this deck there are several layouts that refer specifically to these interests - two New Moon Spreads, a Sabbat Spread, a Wheel Of The Year Spread, Spellwork Divination Spread and a Spell Preparation Spread. All these layouts are designed to take advantage of the meanings specifically given for this deck, so the readings are certain to be both explicit and unequivocal.

This is an eye-catching deck created with a definite demographic in mind. The witchcraft information given in the book and the activities depicted in the cards are of the broadest nature and do not refer to any specific tradition or alignment. For newcomers to the Craft, especially solitaries this deck may be both helpful and appealing. Those who already walk a Pagan path, are a witch or Wiccan, may find this deck will enhance their readings and meditations.