Songs for the Journey Home Tarot 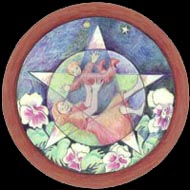 An unusual round Tarot deck published in New Zealand, the Songs for the Journey Home Tarot uses the standard 78 card Tarot structure, but has renamed the cards. Beautifully drawn and coloured artwork.


Card Images from the Songs for the Journey Home Tarot 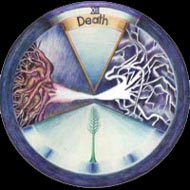 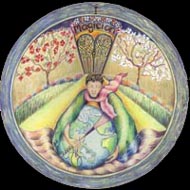 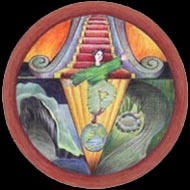 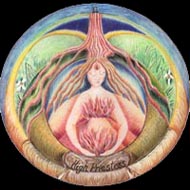 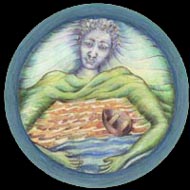 Songs for the Journey Home Tarot Review by Kathleen Meadows

For some unknowable reason this lovely, unique tarot deck suddenly leaped into my consciousness and off I dashed searching for it. It didn’t take me long however, because it’s one of my few round decks and I had managed to find just the perfect sized, red, round case to keep it in.

I found the book almost immediately on my book shelf as well. The synchronicity of having it in my mind and finding it so quickly wasn’’t lost on me. I was excited and curious to know why. What was the first card I pulled on its discovery? The Temperance card which in this deck is called, “Renewal”. As different as its new moniker, the Renewal card depicts a gathering of people playing instruments, dancing and waving in an explosion of fire and energy. In the book, the authors describe the imagery, “Renewal is a cathartic release, a farewell song and a great letting go of something or someone that was once a vital presence in your life. Renewal represents the intermingling of pain, joy and insight, brining about a sense of being deeply healed. Thus Renewal is the unfolding of the experience of rebirth, begun in Death. The times of Renewal are some of the peak experiences on our journey.”

I won’'t go into how absolutely perfect this describes what I’’m going through right now. It would take much more writing space than I have nor am I inclined to write about it all just yet. Just suffice it to say I couldn’’t have received a more appropriate, healing and connectedness message than this one gave me. Nothing could have reminded me more keenly how very much I appreciate this tarot deck. I never did use it much for reading for others but I would often leave it on my reading table to reach over and turn over a card on a whim. Hoping for a comment that would inspire, ignite or explain. It never failed me.

I remember when I ordered this deck online (since it was created and self-published in New Zealand), being so anxious for it to arrive. Having seen its imagery and read about the authors, I had such a strong positive feeling it would fit very well into my lexicon. I wasn’’t at all disappointed. In fact I was delighted. I was so delighted I promptly took it off to a local printer to have the cards laminated in plastic and spent the whole following day cutting the excess away. My finished deck is strong, slippery and very nicely preserved. I’m grateful I did that since as I suspected when I purchased it, it is now and forever out of print. The wisdom that went into this deck shouldn’t be lost.

In “The Myths Behind the Mirrors” page, Catherine Cook describes their process of creating this deck, “Symbolmaking and storytelling go hand in hand. In creating Songs for the Journey Home, sometimes the image came first and the fuller understanding of the picture evolved as Swariko and I reflected on the nature of the archetype. This was the case with the image of the Star. At other times events and stories came first, giving rise to an image which encompassed the qualities of the experience. In particular, Beyond Judgment and the Ninth Earth Song exemplify this process. The following stories are the myths behind the mirrors.”

Odd that Catherine points to the Star in this description. It was not my favourite card. In fact, I think this deck’s greatest strengths can be found in their pip cards. It is here that their ability to depict a story shines. The suits have been renamed by their elements, such as, Earth Songs, Air Songs, etc. One of my favourites is the 2 Earth Songs, which depicts a woman sitting on a fence, back to back with herself as she considers what looks like two offerings presented to her by strong, squarish, masculine hands. The authors describe this card as one which points to difficulties in making a decision – an either/or choice that you would just rather avoid. The card depicts this dilemma so deliciously.

The 7 Earth Songs is absolutely brilliant depicting those same two strong hands in the foreground parting stalks of greenery to look at the seedlings growing in the background. The strong, work-worn hands show a sort of anticipation and gentleness – a hope for the future of these seedlings. It’s poignant and one of the best depictions of the Seven of Disks/Pentacles I’ve ever encountered.

If you purchase this deck however, I would highly recommend you hunt down the accompanying text. The cards have been liberally renamed and creatively reinvented. Especially for the new tarotist, you’ll need a guiding hand to translate the unique yet symbol-rich images. Although not too dramatically off track in terms of the interpretations, there is enough new imagery to signal a need to understand what was in the mind of the creators when the project was in formation. Besides you will enjoy the read! The book is well written, thorough, artistic and provoking.

The deck itself was unfortunately made on rather flimsy cardboard which is why I immediately had it plastic coated. The images were done with pencil crayon giving the deck a sort of innocent, childlike quality and you could certainly use this deck with anyone who was feeling a bit nervous about confronting the ominous mystery sometimes associated with the tarot. It’s positive, whimsical, colourful. The illustrations are reminiscent of what you might see in a children’s book. Don’t be misled however, they carry a dynamic and deep symbolic punch!

I wish you all the best in finding a copy of this lovely deck. I’m sure there are many tarotists like myself who continue to enjoy pulling this wonderful body of work out of their cupboards to while away a nice cup of tea and a contemplative moment.


Complete Details of Songs for the Journey Home Tarot


Similar Decks to Songs for the Journey Home Tarot