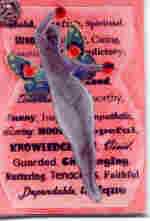 This is the 2005 version of the collaborative Soul Vision Tarot. It has a very traditional structure, but with unique cards by a group of different artists. 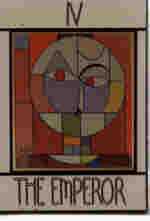 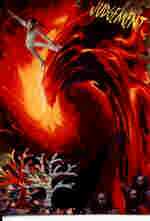 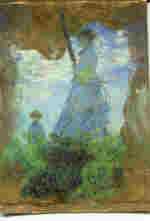 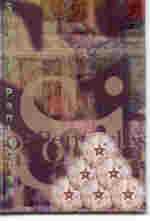 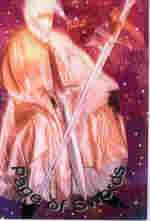 This is the second year that I have reviewed the Tarot swap deck created by the artists of Soul Vision Tarot (a group of artists working through their Internet site). It is completely different by theme, but just as strong in intent and content.

Very traditional guidelines are followed as to suits, Court Cards, and Major Arcana numbering and titles. The cards are 2 1/2" by 3 1/2 ", and are all done without borders (this I like really well!). So much easier to enter - at least from my point of view. The backs of the cards contain artist information, and the name of the artist that was used to develop the card.

This is a very "high energy" deck, and a highly usable one. Why would that be so unusual? Because not all of these artists have a background in the Tarot, and because this is a multi-artist deck. It can be difficult for one artist to maintain integrity throughout all 78 cards. For multiple artists to do this is amazing!

The Page of Swords is one of my favorite cards from this deck. By artist Maxine Lundbek, the card uses a lavender type background, dotted by what could be very shiny stars. A luminescent sword crosses diagonally from the right hand side of the card to the left hand side. Behind this sword we see a figure standing, covered in voluminous, luminescent robes, wearing a luminescent turban and face covering. A large, luminescent sword is placed in front of him. There is a strong sense of energy poised to spring here.

The Ace of Wands, by artist Priscilla Schrock (using the influence of Monet), takes the fiery nature of the Wands and shows its gentle side. In the middle of the picture we see a side view of a female figure, wearing a full length, voluminous blue dress, and holding a wand in her right hand, pointed skyward. She stands on a rolling green hill, with fluffy white clouds in the blue sky behind her. In the background, on the left hand side of the picture, we see a male figure, as if he is coming up over a hill. The finish to this card is awesome - and almost gave me a heart attack! What Priscilla has done is to take the finished card, and edge it in a very flowing manner with gold. My fear was that the gold would not scan, and that I would not be able to use this card. It is paint, not glitter or gilt, and it scanned well (at least, it scanned to the best of my nontechnical ability!). Priscilla also placed the card in a thin plastic sleeve for protection, which I appreciated.

I think that the High Priestess is one of the most important cards in any deck, with her intuitive, feminine nature. Artist Molly Hidlebaugh did a first rate job, using artist Claudine Hellmuth as her inspiration. The background for this card is done is light pink. In the upper left hand corner we see an icon that appears to be a goddess in profile. In the middle of the card we see a nude female, one arm reaching up, and the other arm reaching out. Behind her we see multi-color butterfly wings. Black lettering behind the figure talks about the strengths of the High Priestess - bold, strong. funny, loving, knowledge, guarded, challenging, nurturing, faithful, dependable.

The Emperor, by artist Marie Easley (using artist Paul Klee as inspiration), is one of few cards that could be considered to have a border. Light gray blocks edge the top, bottom, and sides of this picture. (In the middle of the top block we see the letter "N" in black. In the bottom block we see the card title in black.) They form a sort of window for the internal picture, which is a round face, shown from the neck up, done in squares. The strength of the Emperor, and the formality associated with him, come through strongly.

The Four of Cups, by artist Holly O'Brien (using artist Edouard Manet as inspiration) truly reflects the sadness that this card entails. In the middle of the picture, against a rust colored background, we see a sad faced woman. Her hair is drawn back, and she is wearing a dark dress with a light colored bodice. Three full cups stand before her. From above, an arm reaches down from the heavens with a fourth cup in its hand.

Judgment, by artist Connie Williams (using the influence of artist Vladmar Kush) is pure energy! The predominate two-thirds of the card is done in red and gold - a red wave of fire, with yellow-gold flames at its center. Riding the crest of the wave is a female figure in white, one arm reaching out, as if holding on to something. In the bottom third of the card we see what appears to be a tree, in white, with eyes and skeletal heads surrounding it. The fires of hell that we can put ourselves in ... yes, indeed.

The Six of Pentacles, by artist Winter Wren (using the influence of artist Karl Rohig), is the type of card where you see something new each time you look at it. Layer upon layer of meaning - done in grays and browns, with more than one ethereal figure hiding in plain sight, along with a full moon.

There are many other cards that are equally well done. The heaven/hell dualists in the Two of Swords (by artist Amanda Nudleman), as they balance themselves atop a globe of the world, are quite thought provoking. The southwestern feel to the Three of Cups (by ...)is haunting in its simplicity. The Hanged Man, as he lays suspended from a long red ribbon twined around the finger of the hand that appears above him, speaks a real truth. Strengnth (by artist Lynn Voike) cleverly combines the trunk and roots of a tree with the upper body of a female figure.

These cards all work together to bring us the archetypes that are the Tarot. I want to thank this group of artists for sharing their deck with me. Special thanks go to the individuals that agreed to allow me to use scans of their cards. Know that you are the way-showers for others, so that they can begin to know how to showcase their talents.