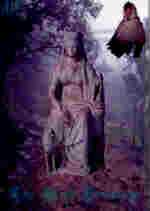 The Soul Vision Tarot is a collaborative deck by artists associated with the Soul Vision website and Yahoo group, not all of whom have Tarot experience. Published as a limited edition of 79 decks. 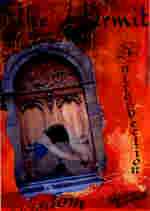 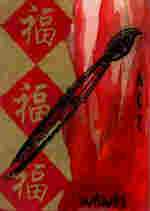 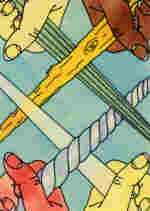 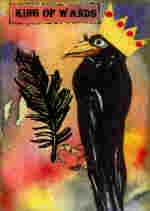 Soul Vision Tarot Sample Images © The individual artists from the Soul-Vision ATC Tarot Deck project, 2004, and may not reprinted without express permission.

I was incredibly honored when I was asked to review this deck. The Soul Vision Tarot is a collaborative effort from a group of artists connected with the Internet site www.soul-vision.org, and its associated Yahoo e-group. Some of the artists have a background in the Tarot, but not all of them. This in itself was astounding to me. Why join in a Tarot deck project if you don't have a Tarot background?

What I saw in the finished product was a deck that follows very traditional Tarot guidelines, yet was highly reflective of the individual artists, their thought processes and the medium that they choose to work in.

There is a great deal of feminine symbolism in this deck. In the Trumps, both the Fool and the Magician are shown as female figures. The Fool (by artist Karen Glover) shows a female figure with one foot on land, and one foot over water. She is standing in a field of wildd flowers, holding a cup in one hand and what appears to be a slice of watermelon in the other. The sun is shining brightly over her left shoulder, while over her right shoulder we see the white. cloudlike form of a winged horse. The Magician shows a female figure with one hand raised to the heavens and the other pointing down to the earth. Over her heart center is a stunning green mandala.

The High Priestess (by artist Winter Wren) is a rather unique card. In the middle of a misty forest we see a large stone figure of a female goddess. In the background is what appears to be buildings of some type, and in the upper right hand corner we see the upper half of a cloaked female figure, appearing to float in the air.

The Lovers (by artist Catherine Anderson) is a very gentle card, featuring male and female winged, angelic figures. In the lower left hand corner we see a butterfly poised over what appears to be an egg.

The Hermit (by artist Deece) is a bit of an unusual card, featuring a figure seated, with her arms around her knees and head down. The words on the card are "self", "introspection", and "wisdom". (Deece shared with me that she is the figure in this card!) The Hermit is one of my birth cards, and I can definitely identify with the pain that this card shows. The Devil (by artist Bernie Berlin) is quite well done, clearly showing that the "ties that bind" are of our own making. Many of the cards make use of the butterfly motif of transformation, including the Trumps Hanged Man (by artist Erica King) and Death (which shows a large butterfly covering the third eye of a face shown in repose), as well as the Two of Wands, the Queen of Wands (by artist Bernie Berlin), the Ace of Swords, and the Nine of Swords (by artist Lori Shields). If I had to choose one card that grabbed me in this deck, it would be the Ace of Wands (by artist Laura Reed). Here we see a black paint brush over a reddish "fire" background, with a series of three red squares to the left, with beige icons on them.

The Four of Wands (by artist Bonnie Cheuvront)) is another well done card, depicting the energy of conflict in an interesting way with the use of four different types of wands. The Nine of Wands (by artist Leslie Sirag) shows clearly visible green leaves on the wands themselves, indicating the "living" nature of this suit. The Ten of Wands (by artist Jennifer Whitten) shows the traditional figure attempting to carry his "burden", while the Queen of Wands (by artist Bernie Berlin) is portrayed by a somewhat war-like figure, with two dogs and two cats at her feet.

The King of Wands (by artist Laura Reed) shows a black bird, wearing a crown, standing next to a black feather. (The same artist did the Ace of Wands and the King of Wands, and I love the work she did with the feather and the paint brush, both of which stand out from the card.)

The Ace of Swords comes across with great gentleness (and a lovely butterfly in the right hand corner). The Two of Swords (by artist Theresa A. Chidester) shows two bulls butting heads, with a combination crescent/full moon in the sky. The Four of Swords (by artist Dezra Despain) shows the very traditional four swords poised over a reclining body with an interesting twist - the hands held over the chest in an attitude of prayer. The Five of Swords (by artist Lisa DiPlacido) shows a female figure with her head on her arms, leaning over a parapet in a very dejected pose, but it also shows a pentacle in foreground. The Nine of Swords (by artist Lori Shields) shows a very tranquil face with what appears to be an apple in the area of the third eye, with the figure of a butterfly over it. The Queen of Swords (by artist Anita Carroll Edmonds) is a warrior like figure wearing a Nordic-type crown facing a darkened figure, while the King of Swords (by artist Jennifer Whitten) shows a male figure, sitting on a throne, holding a sword upright in his right hand. The suit of Pentacles has some very interesting cards, including the Three of Pentacles (by artist Mahalah) which shows a curved stairway, with a road in the background and a beehive in the lower right hand corner), the Five of Pentacles (showing two figures, one of which is ducking their head for protection, perhaps from the five birds flying overhead), the Seven of Pentacles (by artist Michele Krigh), which is very traditional in that it shows a figure in the middle of a field, with a lush tree in the center), the Eight of Pentacles (by artist Kitty Mitchell, which shows a male figure seated, "working" on the figure of a pentacle), the Ten of Pentacles (which shows an old fashioned family photo), and the Knight of Pentacles (by the artist Amanda Kane), which shows a female type warrior figure. Having been involved in two deck creation projects myself (even though I am decidedly "non-artistic"!), I know the excitement and pride these artists must feel. This is a limited edition deck, available only to the artists involved in this project. I wanted to showcase the excellent work done here to show others in the Tarot world what can be done. Even though the mediums used here differ (some hand drawn, some photo collage), the deck comes together in a very exciting manner. Having tried it myself, I can attest to the fact that it can be used for readings, with excellent results.

Projects like this allow those involved to stretch their creative natures, but they also encouage the participants to bring together the creative part of their selves with their cognitive selves. Great wisdom and internal peace come from such efforts.

I want to thank the artists from this project for being willing to share their creative and their intuitive selves. We are all the wiser for it!