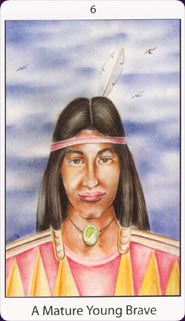 The Spirit of Truth Native American Reading Cards are 68 cards depicting scenes, folklore, people and symbols from a Native American way of life. The illustrations were created in pastel and coloured pencil. 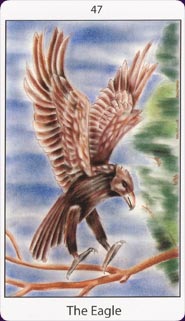 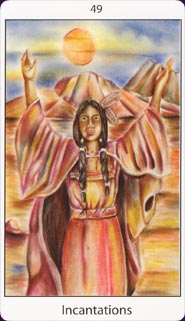 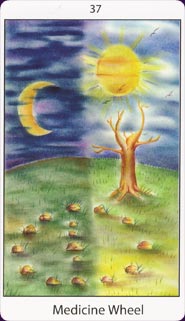 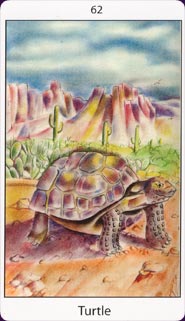 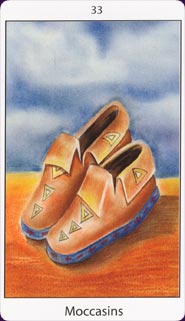 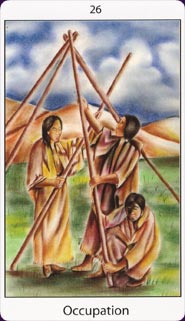 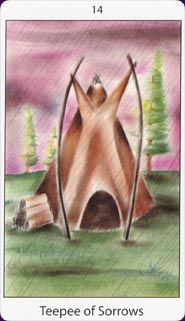 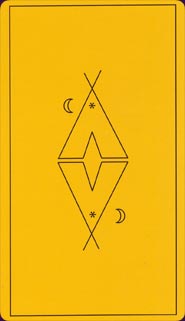 I recently had the honor of being asked to review a non-Tarot divinatory deck and book called the Spirit of Truth. Based on a Native American theme, the 68 cards (and 169 page companion book) were channeled by a spirit energy called Sky Spirit in a dream state through Mr. Maurice Ramsey. (Note: Sky Spirit is referred to as a Virtues Angel, an energy that never takes on a physical body, but prefers to work with us through the dream state. He chooses to come to those that are ready to receive his Love, Light and Wisdom.) Before I talk about the book and deck, I am going to go into a bit of Mr. Ramsey's background. (There is a reason that this material was channeled through him, I believe.)

Ramsey holds Doctorates in Metaphysics and Theology, is a Seichim/Reiki Master/Teacher, founder and director of the House of Miracles Holistic Healing Center, and has taught classes in healing and meditation for over twenty years. He is also the author of the Healing With Seichim/Reiki Handbook, and has worked in the areas of healing and Seichim for over thirty-five years.

In discussing the cards, Ramsey notes that the symbolic images are a tool that the reader can use to access their inner Spirit, and help develop their individual psychic abilities. As the reader opens up to his or her own psychic awareness, Sky Spirit will appear to them in dream state and help develop the inner meaning of each image. The Spirit of Truth cards act as a guide to revealing inner truths to the reader, as well as helping to guide them on their personal journey through their physical and emotional worlds.

In giving the background for this deck, Ramsey explains that the were originally given to a shaman while he was in a deep trance, in the time before time was recorded. The shaman took these images, placed them on deer hide backed with wood, and used them to help foretell the future of his people. They are being given to us again at this time to assist us in living our lives in a better fashion.

One of the notes from the author was one that I found very interesting - and that was on how to deal with a card, or cards, that fall from the deck while it is being shuffled. His thoughts on this are that this may be an indication that the Sky Spirit is trying to call the readers attention to a specific piece of information. I like this thought, because it is exactly how I handle them!

Included in the book are several spreads: a twenty-six card Medicine Wheel Spread, an eighteen card Sky Spirit Spread, a twenty-one card Pyramid Spread, a thirty-one card Tree of Life Spread, and a nine card Circle of One Spread. There are no defined positions, but there are defined areas within each spread. The way the cards are to be read is in small groups, in relation to each other. I think this goes a long way towards opening up readings, and was pleased with what I saw here. The one thing that I would have liked to have seen was at least one example of how a reading is done.

The reader is encouraged to meditate with each card to get to know it before beginning to read with them. The reader is asked to listen to the voice of the card with their inner senses. In Tarot, we call this entering a card, and it is an excellent exercise for getting to know the energy of the cards.

Each card is presented with a black and white scan, a description of the cards energy, and its divinatory meaning. There is no indication that a card showing up in a reversed position is interpreted any differently that if it appeared in the upright position. From the book:

The Phoenix is resurrection from sorrow. Currently in depression, represented by fire, but there is hope in resurrection into a better outlook on life. Look at the surrounding cards; they will tell the story.

There is a wide range of subjects within the cards: Young Woman, Stern Brave, Chief, the Phoenix, the Trail, Deer Hide, the Shield, Teepee of Sorrows, Meditation, the Great Bear and many, many more. They cover the gamut of what we experience in our everyday lives, so that we can get a better idea of how to deal with our issues/problems. At the end of the book is a series of short interpretations for each of the cards.

The cards are 2 3/4" by 4 3/4", on glossy cardstock. There are four extra cards that carry the short interpretations for each of the 68 cards, for reference while doing a reading. The card backs are a deep yellow, with a fine black border approximately 1/4" in from the edge of the card. In the center of the card back we see end to end teepee type symbols, with a crescent moon to one side. It would not be possible for the reader to tell if the cards were drawn upright or reversed.

The face of the cards shows a 1/4" white border, with the card number in black on the top of the card, and the card title along the bottom. A fine black border outlines each illustration. The artwork was done in pencil using largely pastel coloring, using a somewhat "primitive" tone.

One of my favorite cards, and certainly a strong Native American symbol, is Buffalo. Here he faces the reader head on, with a state of gentleness and integrity about him, against a background of white clouds floating in a blue sky. Buffalo's divinatory meaning is that of finances and success in business.

Normally we think of the Phoenix as being of more Egyptian origin than Native American. Here we see a two-headed bird (one head looking to the right, one to the left), with straight, stylized wings. He represents resurrection from sorrow, and in a reading indicates sadness, melancholy and the feeling of not being able to see ones way out of difficulty.

The Scroll is another image that we normally think of as being Egyptian. Here we see an ancient scroll partially unrolled, so that it may be studied. The Scroll represents Wisdom, Ideas, History and the Future. Its divinatory meaning is that of harboring secrets, of hidden influences at work.

The Shield is portrayed as resting over a crossed bow and arrow. In the middle of the shield we see the representation of a bird. The Shield is a form of protection from things that may harm us. Its divinatory meaning is that of security, safety, and defense.

The Stern Brave is one of the "people" cards in this deck. Here we see a young brave, a stern expression on his face, against a background of white clouds floating in a blue sky. He is a warrior and a hunter, but also a very temperamental person. In a reading, this can suggest a person who is cold, moody, and quick to anger.

In the Trail, we see a brown road/trail wandering through a green landscape, with cactus plants along its edges. In the background we see a setting sun, and hills. The Trail represents a journey or voyage in which the obstacles are easily seen. If the eye is drawn to the sun, the journey will be pleasant or successful. If the card falls next to, or near, Deer Hide in a reading, be aware that the journey is away from the sun, and the traveler needs to be wary of his own shadow blocking his sight. In a reading, the Trail indicates travel or a journey.

I liked the way that this deck and book were put together, as well as how the spreads were presented. The cards represent qualities and situations from everyday life, and the symbols found within them are very straightforward.

This is a Limited Edition (1,000 copy) book/deck kit. An added bonus - a beautiful, cobalt blue bag comes with the cards to act as their "home"!

The Spirit of Truth Native American Reading Cards are the creation of Maurice Ramsey, founder and director of the House of Miracles Holistic Healing Center and Reiki/Seichim [an Egyptian healing art] master teacher who has been active in spiritual healing for thirty-five years.

Maurice’s deck has 68 cards - 68 major arcana, as he puts it - that represent “a way of life each person must follow while living on the earth plane”. The Sky Spirit - an angelic energy - revealed the deck’s images and their symbolic meaning to Maurice while he was asleep, in order for him to make the images available to all. His cards are intended to be used as a guide to reveal inner truth, develop the reader’s psychic abilities, and direct them on their sacred journey. “The cards seem to take on a life all of themselves and act as guides, and reveal to you the inner truth and direct you on your sacred journey through the physical and emotional of your world.”

The artistic style is soft and vivid, rendered in pastel and coloured pencil. Nearly all of the cards are set in nature or in the open air, though a few are apparently placed on a kind of stage with backdrop (like 19 – Tomahawk, 24 – Weapon, 27 – Drum). My favourite card is 40 – The Dream Catcher. It’s a complex image with a combination of colours and elements caught my eye. In it a rapturous man with his eyes closed appears to be dancing, or possibly seeking for something; a bird of prey flies overhead and the planets are visible in the sky. 49 – Incantations has a similar colouring and is just as appealing with its image of a women with her arms upraised and the moon behind her.

The Spirit of Truth Native American Reading Cards set has been self-published by Maurice in a limited edition of 1000 copies and is very much a labour of love. The set contains the shrink-wrapped cards (68 + 4 cards with keywords), a blue velveteen bag, and a 178 page companion book. The cards are very pleasant to feel and hold in the hand, with smooth corners and edges and a reasonable gloss on the face and backs. The back image is a strong yellow colour with a mirrored (and thus reversible) image of a teepee and crescent moon.

The book, The Spirit of Truth Native American Reading Cards: Instructions and Interpretations, offers information about the creator and on the origin of the cards, about the cards and how to use them. There are five spreads, and step-by-step meditation instructions. The ‘Interpretation of the Picture Key’, the section with interpretations of the cards, is followed by short interpretations or keywords. These are also printed on the four extra cards that come with the deck, as an easily accessible mnemonic. I also noticed the odd spelling error throughout the deck and book, but I didn’t find it to be distracting.

The Spirit of Truth Native American Cards are a complete set of for the reader with connects with the Native American theme and is looking for a deck that will help develop their intuitive abilities and assist them on their spiritual journey.