Tarot of the Spirit World 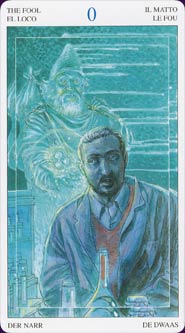 The Tarot of the Spirit World is an unusual deck with angels, demons, and apparitions from the otherworld appearing in the tarot scenes. It is a non-traditional deck with a different spin on its imagery and meanings, and is strangely compelling.


Card Images from the Tarot of the Spirit World 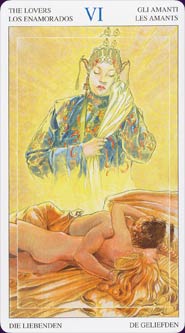 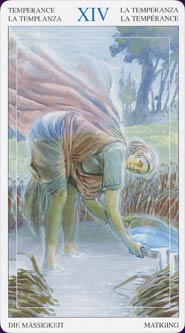 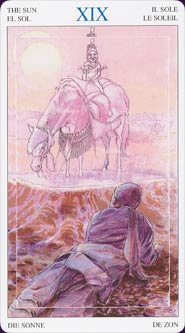 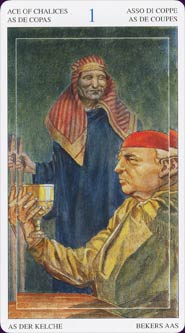 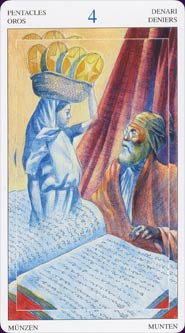 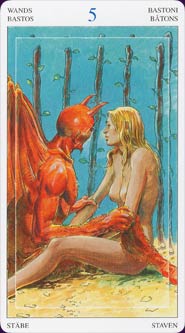 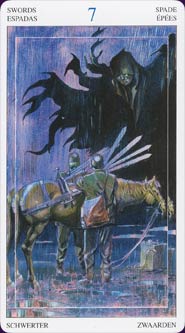 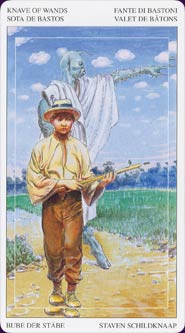 Tarot of the Spirit World Review by Bonnie Cehovet

The first thing that I have to comment on is the packaging. I saw the same thing in the Golden Klimt Tarot, but did not think to mention it. What Lo Scarabeo has done is wrap the cards themselves in plastic, then placed the LWB on top of the cards, and add another layer of plastic wrap over the deck and LWB. It is a little confusing to open the first time, because you take one layer of plastic completely off, and there is still more to go. Okay, perhaps only confusing to me! I was impressed, I thought it was a wonderful way to present the cards.

"Tarot of the Spirit World" is based on the things in life that, as the LWB says, guide us, but that we cannot quite grasp. The invisible world, the world of dreams and mysterious messages. We may call them angels, demons, spirits, or entities, but whatever we call them, we end up trying to fit them our rational world. We make an effort to obscure their signals, to not see them. The LWB posits that the borders of our logical world will expand if we follow the paths set by our emotions, our truest feelings, and our deepest fears.

From the LWB: The philosopher Lao Tse urges us to "dim the light and become one with the impalpable world."

In this way we can come to understand the invisible world of spirit. Robert De Angelis designed "Tarot of the Spirit World" as a means of bridging the worlds of reason and emotion, creating a Middle-earth where shadows come to life and our unconscious universe becomes real - if only for a short time.

The Major Arcana titles are traditional, with Justice as VIII and Strength as XI. The suits are Wands, Chalices, Swords and Pentacles. The Court cards are King, Queen, Knight and Knave.

The LWB (which follows the Lo Scarabeo pattern of printing in five languages - English, Italian, Spanish, French and German) gives a short introduction into the world of spirit, with an accompanying explanation of the foundation for this deck. Each card has a short paragraph about its intention, with no upright or reversed keywords, and no indication of the background of the imagery.

The divinatory spread that is presented is entitled "The responses of omniscient spirits". The Major and Minor Arcana are separated and laid out, with the Major Arcana acting as "responses" to the issues in the Minor Arcana cards.

The cards are approximately 2 5/8" by 4 3/4", of good quality, glossy card stock. The backs have a 1/4 " white border surround a dark blue background with white stars and the "ghost" of what appears to be a female figure. The figure is mirrored so that it would not be possible to tell if a card was drawn upright or reversed.

The illustrations in this deck are quite interesting, and very much into the world of myth/fantasy. The colors in the deck are quite muted, with the figures portrayed in a realistic fashion. The Fool, done in aqua, is portrayed by a modern day scientist, seated in front of his glassware, with an overlay of an elderly, wizard type character with his staff over his shoulder, wallet at the end. The Magician, done in yellow and orange, is an older, bearded male figure, with a wand in his right hand, and what appears to be some type of bottle in his left hand, with a decorated handle on the bottle. Above his head winds an orange ribbon in the form of a lemnescate.

The High Priestess, done in light greens, shows a young girl, kneeling with her back to the reader. She is facing the spirit vision of a seated woman, wearing a horned headdress with an orb in the center. The Hierophant shows a male figure, standing, with light purple ecclesiastical garb and crown, holding up a wand in his right hand. Above his head appears a colorful mandala, with some type of mythical creatures standing in front of a pillar and behind his right shoulder.

The Hanged Man is shown hanging from a large green bell, with his right hand holding the rope in front of his neck, and his left hand behind his head holding the end of the rope. The figure on the Star is the same figure that shows on the back of the cards, but is seen in sharper relief. The Moon, one of my favorite cards, shows a crescent moon in the background, with a body of water, with reeds or rushes at the shoreline. Reflected in the water as spirit is a female figure.

The Aces, unlike other deck, do show human figures, with either the "real" figure, or the spirit figure, holding the symbol of the suit. The Queen of Chalices is quite an arresting card, showing an older Queen, cup in hand, looking out from the card. Behind her, in a mirror, the spirit Queen shows a younger version of the same woman, in the same pose. The Five of Pentacles is another very surreal card, showing a young woman in a long dress, with a basket in her left hand, walking "out" of the card, Five Pentacles are shown coming out of t he basket and going into the sky. The spirit form, behind the right hand side of the female figure, shows a male figure in Egyptian-type dress.

I found this deck entrancing, and very easy to use. It would not be a good deck for beginning readers, as the symbolism is far from traditional. The one thing that I wish the LWB had done was explain what the background for the spirits represented in each of the cards was. Even without that knowledge, this is a deck that is well done, and fun to work with. A good deck to use when you are "stuck" in a reading (or a project!).


Tarot of the Spirit World Review by Solandia

"A Tarot deck for exploring the boundary between the world of reason and that of emotions, the Middle-earth where shadows come to life and the invisible becomes real."

Each card in the Tarot of the Spirit World has a doubled image: a lifelike scene, and a spiritual vision, guide, or apparition from the invisible world made visible. Instead of having conventional spirits or titled deities, these are more general imaginations of entities and messengers from the spirit world. They’re not just pretty angels either, but spirits are of all types, dark and light – lovely, nightmarish, puzzling, advisory, demonic, and even human-like.

The spirits cross the boundaries or time and space, appearing to people from a dozen cultures and times. The Knight of Swords in a muscle-bound be-turbanned young man on a camel, the Tower’s headless knight is a Celt walking from a burning round tower, Justice wears an eighteenth century tri-corner hat and holds scales and a sword, and looks gleeful at a hanging, the shadow of which is cast behind him. There are also some modern scenes, such as a judge with a microphone in a wood-panelled courtroom; some very beautiful scenes, like Temperance or the Moon; natural scenes, and some purely fantastic. All are finely illustrated and detailed, down to hairs in the beards being individually visible, in Roberto de Angelis’s typical style.

These entities and spirits have been divided into five general categories for the deck:

The suits, with court cards titled Knave, Knight, Queen, and King, are each very different in feeling: Chalices spirits are ethereal and often pretty, while the Wands suit has demons that are very demonic in appearance and rather alarming – bald, red-skinned, winged and horned - and has some of the truly bizarre cards in this deck. My favourite was the like the Knight of Wands, which shows a pastoral scene of a bald, winged demon sitting motionless on a cart behind a horse on a country lane, a rug tucked warmly around his knees.

Each of the cards have an outer white border, and an inner faceted border that takes the edge of tarot image and duplicates it. The backs are lovely, deep blue and white with stars about the edges, and a reversible image of a woman holding a cornucopia of stars (indeed, it’s part of the image on the Star card).

The booklet is Lo Scarabeo’s usual, with a quick introduction to the deck’s concept, card meanings, and a spread. For this deck, the unique spread is “The responses of omniscient spirits”, and uses eight cards from both the major and minor arcana.

The card meanings are tangentially related to traditional meanings in some ways, but in practice are very unique to this deck and its approach. They have more difficult, blended, often negative meanings, multi-layered even at the most positive – even the Aces are dual-edged. But then usually challenging cards are tempered, such as the Three and Ten of Swords, and even the Tower. I needed the booklet to interpret the intended meaning at first, and some time getting used to the imagery would be well spent.

VI – The Lovers. Love is always a choice of commitment and suffering, but it is often a path towards understanding oneself and others.
Ace of Chalices. New feelings sometimes blind us, preventing us from discerning the truth.
5 of Wands. Every passion holds a series of contradictions that must coexist.


The Tarot of the Spirit World is otherworldly yet strangely normal; the spirits and odd creatures become a natural part of the scene. It’s a very different deck and non-traditional deck to use, but it’s still a workable deck. One that I think it would be best used intuitively, and when you need something a little off-the-wall to get out of a Tarot rut.


Complete Details of Tarot of the Spirit World


Similar Decks to Tarot of the Spirit World