The Spirit Tarot has non-traditional major arcana with gentle, soft paintings. The minor arcana have photographs of nature and the outdoors - storms, sunsets, forests - with small magical and spiritual characters added. Surrounded by large white borders and titles in four languages.


Card Images from the Spirit Tarot 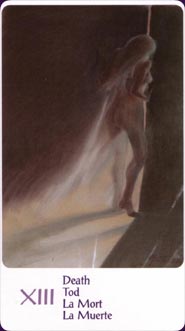 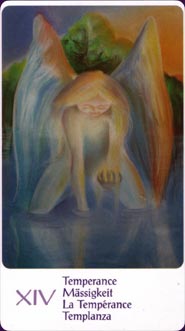 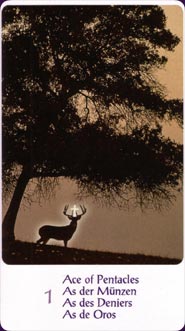 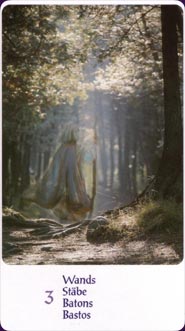 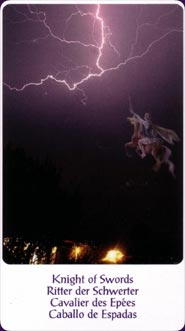 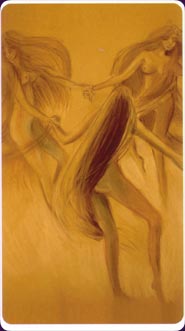 Spirit Tarot is a joint work of several people – the Polish artist Joanna Iwanska, the Austrian healer Helmut Weyrer and the German painter of angels Sabine Thiel – coordinated and supervised by the designer Kris Dorea. Combination of two artistic styles – pictures in the Major Arcana and photo collages in the Minor Arcana - makes this deck unusual as the parts of the deck differ very much. The Major Arcana show the states of consciousness, important phases and roles in life while the Minor Arcana represent moods, emotions and feelings, sometimes situations.

This deck is one of the few where I like Minor Arcana more than the Majors. While titles of suits and the court cards follow the RWS tradition, the Wands correspond to air and the Swords correspond to fire. The Swords show sunsets and thunderstorms while the Wands show beautiful forests and clearings lit by the sun. What attracts me most that by reviewing the Minor Arcana you instantly “jump into” the picture and feel the dampness, warmth, uneasiness or tranquility, you become one with the landscape in the card. The nature, time of the day and surroundings remind you of the specific events in your life when you felt exactly like that and that could be a clue to the meaning of the card.

The cards are made of the glossy sturdy cardboard fit for the active use. Pictures are surrounded by the white borders with the title of the card in four languages (English, German, French and Spanish). The card backs depict the fragment from Four of Wands and are non-reversible. The deck is accompanied by the LWB which I found of little use except key phrases about Major Arcana and the general info about the deck. The box for the deck is not flimsy and has a Chariot picture on it. My deck is printed in Belgium in 2007 by AGMuller Urania.

In my opinion, this deck represents the uncommon approach to the spiritual issues where the cards can be read intuitively without remembering names and “responsibilities” of angels, studying life of fairy folk, etc. They speak to you as they are even if you are a novice in Tarot. However, if you do not use the reversed positions, the deck may lack negative meanings; it mostly reflects the positive side of life. The artwork seems uneven – beautiful cards like Death card or two of Cups may be followed by hollow ones like Page of Pentacles. The woman’s figure from the Judgment card can be seen again in several Minors which is rather weird. Still, the deck is good as a collector item, suitable to read for inspiration and just for yourself. It does not upset the reader, but helps to find wonders in each moment of life!