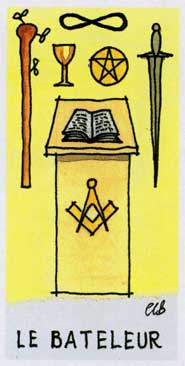 The Square & Compasses Tarot is a deck created especially for Freemasons. It could also be used by a non-mason, but prior knowledge of Qabalah and esoteric symbolism is essential. 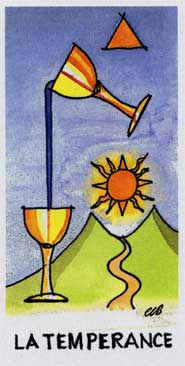 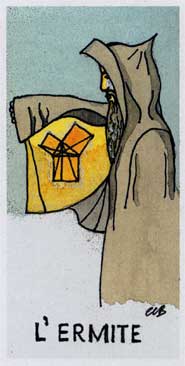 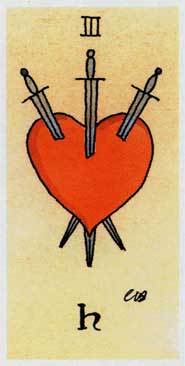 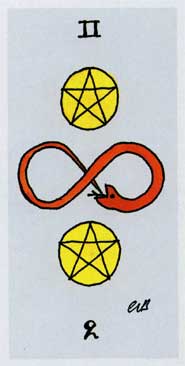 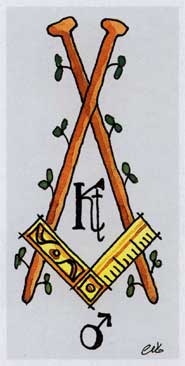 The Square & Compass Tarot is a privately printed deck done by W.Bro P.C. Browne PZ as a tool for use by Freemasons. The deck is based on the principles of the Masonic Craft using symbols drawn from the Craft. The author states that he has ignored all degrees after the Third, but that he has included the Holy Royal Arch and Mark Master Mason degrees.

The development of this deck is fairly traditional, in that it follows the template of the four suits (and all that they represent) as reflected in the four Kabbalistic worlds of Atziluth (Physicality - reflecting the work of the operative Craftsman), Briah (Intellect - the liberal Arts adn Sciences reflected in the FC degree), Yetzirah (Emotions - reflecting the sensitivity of the Mason to his environment) and Assiah (Spirituality - embodying the sub-conscious acts necessary for the conception and creation of all things).

The cards themselves are 2 1/2" by 4 3/8", on good quality glossy card stock. They are very easily handled by smaller hands. The back of the cards shows a white background, with the square and compass glyphs on the top and bottom of the card in black, with the points in to the center so that there is no way of knowing whether the card has been placed in an upright or a reversed position. The card face shows a 1/4" white border, with a gray background to the inset. For the Pips, the card number is in black at the top - there are no titles, but the cards do contain pictures. The Court Cards contain no numbers and no titles. The Trumps contain the titles across the bottom, in French (the author felt that the French language was closer to the concepts for the cards that he wished to convey), but are deliberately left unnumbered. The geometrical format of the cards is that of a double square reflecting the frontal view of the Alter of Incense.

* Please note: I do not speak, read or write French. I placed The Square & Compass titles as close to the traditional titles as I could based on the symbols on the cards. Some of the titles may be mismatched - but they are there!


It is interesting to note that Browne received specific information in dream state concerning The Square & Compass Tarot. He was given the information that la Papess should be the 11th path, resulting in a triangle being formed as in the (Masonic) ritual for the three Principles of The Holy Royal Arch.

The LWB (Little White Book) that accompanies the deck presents the cards by Kabbalistic Path. For instance, the first cards presented are for the 32nd Path - Malkuth to Yesod: X to IX of Wands, X to IX of Swords, X to IX of Cups, X to IX of Pentacles and Le Monde. From the booklet:

The Celestial globe of Le Monde crowns and adorns the central Ionic column of wisdom, with the four fixed zodiac points co-ordinating in the form of an equal armed cross. The karmic saturnine influence is conveyed by the pink and gray halo encompasing the globe. The balance of achievable knowledge and karmic restraint at the base of the middle pillar as a caution t hat we are answerable for our actions no matter what our station in life, as knowledge at whatever level carries a great earthly responsibility. This card therefore governs all earthly matters and specifically the Candidate's suitability as a Freemason."

II to I of Swords (Briah)

The Knight-King of Wands represents the universal established first principle of Fire of Fire, or the pure spirituality of "Nirvana". This is illustated by the two wands in the form of compasses set with the square of the WM. The square being an emblem of morality, and the Master of the Lodge. The compasses remind us of TGAOTU's unerring and imparitla Divine justice."

There is no explanation of how to interpret the cards, and no keywords given - only the concepts. There are also no spreads offered, and no information on clearing the cards - or on any treatment of the cards in general.

Some of the cards come close to the traditional Tarot representations: Le Bateleur (The Magician) with all of the elemental tools; Les Armoureux (The Lovers) with the male and female figures; La FOrce (Strength) with the glyph of the lion; L'Ermite (The Hermit) with his lantern and the Three of Swords with the three swords piercing the heart. Then there are cards that do not come near the traditional representation: Le Fou (The Fool) is looking down as he steps off of the precipice - and he has no canine companion; Temperance shows the water being poured from cup to cup in mid-air; all of the Court Cards and Pips show symbols and background, but no people.

This is a deck that could be used by a non-Freemason, but only if they were already conversant with the Tarot, with the Kabbalah and with essoteric symbolism. It would mean nothing to the Seeker being read for if they did not have either a strong Tarot background or a strong Freemason background. This deck works exceptionally well for the audience it was meant for - Freemasons.