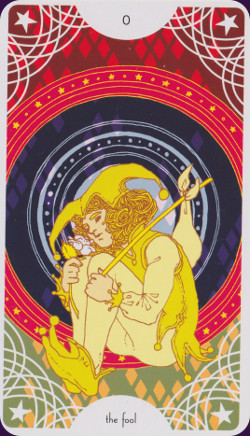 The Star Spinner Tarot is a sweet and optimistic deck entirely created and illustrated by comic artist, Trungle. It's designed to be more inclusive (there are four variations on the Lovers card) and entirely European, with borrowed Orientalist influences removed. The art on the 81 cards has a pretty, fairytale, Art Deco feel. 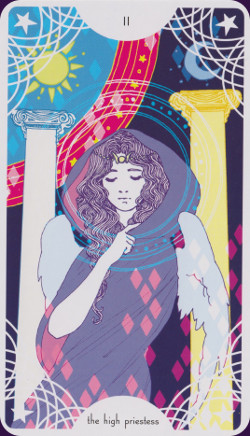 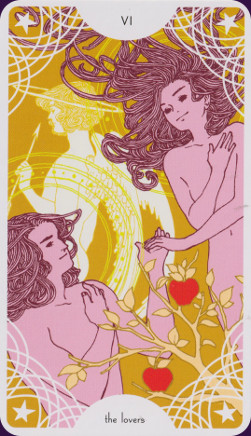 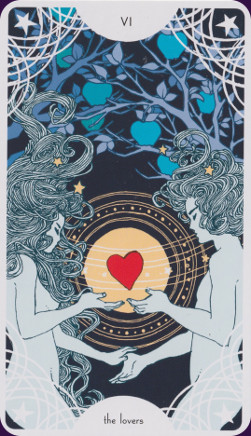 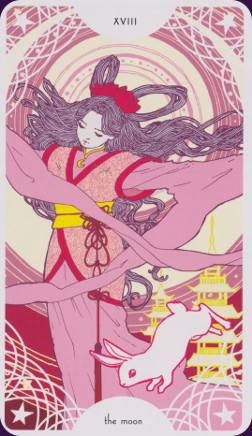 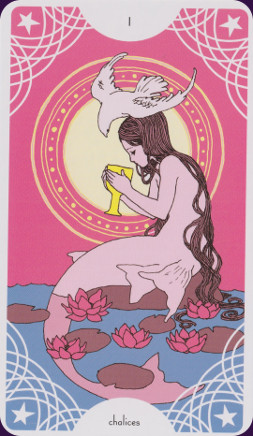 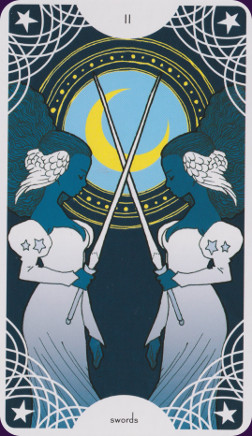 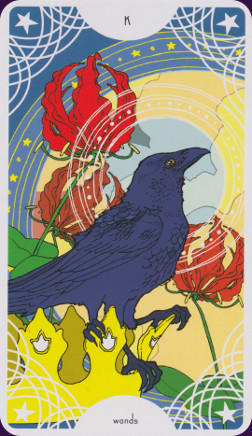 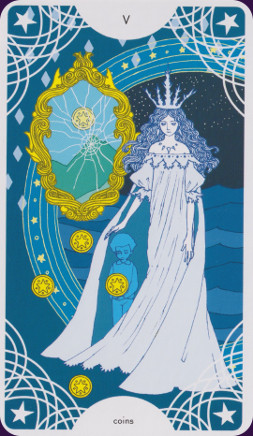 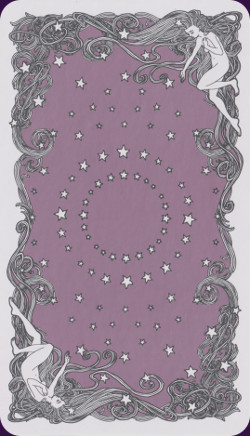 One of the driving concepts behind this deck is the removal of Orientalist symbolism from tarot imagery. Western occult traditions have borrowed, some might even say misappropriated, symbolism and imagery from Oriental and Middle Eastern art, philosophy, and wisdom. The overall effect was to exoticise Eastern culture without understanding its history and context, and to plunder what is perceived as mysterious elements without care for the societies and cultures from which they came. In other words cultural imperialism crept into tarot imagery. Artist Trungle has replaced Orientalist details with images drawn from a more European historical and cultural background.

This is a fully illustrated 81 card tarot – It has 25 Major Arcana and 56 Minor Arcana cards. Two cards in the major Arcana have been renamed, although the concept behind them remains the same – Strength is retitled Fortitude, and the Wheel of Fortune is renamed Wheel of Fate. There are four Lovers cards which depict differing relationship orientations – male/female, male/male, female/female, and gender-neutral/gender fluid/transgender. The card reader is asked to choose the Lovers card which represents their relationship orientation and discard the other three cards thus leaving the Major Arcana at the usual 21 cards. The suits are titled Wands, Chalices, Swords, and Coins. Each suit has 10 number cards and four Court cards. The Court cards are Pages, Knights, Queens, and Kings. Rather than titles the court cards are delineated by letters i.e. P, Kn, Q, and K. Major Arcana cards have their title given at the bottom and Roman numerals at the top, the Minor Arcana lists the suit at the bottom and Roman numerals at the top, with the Court cards featuring a letter at the top and the suit at the bottom.

The cards measure 70 x 120 mm which is a fairly standard size for tarot cards. The card stock is very good, quite thick and not particularly flexible. The deck itself has a bit of weight to it and it sits solidly in one's hands. This tarot deck has a low gloss finish with smooth texture on the face, while the back faintly textured and toothy. The cards shuffle well enough, although they do tend to 'catch’ or clump together sometimes - which may be due to the slightly rougher texture on the back of the cards.

The print quality is excellent – it is clear, clean and crisp. The strong lines and potent colours are reproduced without fault. There are no colour bleeds, misprints, or blurring. The artists pallette focuses on storybook pastels – pinks, reds, blues, and golds in strong, flat, poster paint-type colours.

The Minor Arcana is colour-coded with Wands dominated by yellow, Chalices are pink and light blue, Coins are green and gold, and Swords are dark blue.

The artist's style as stated before is strongly influenced by storybook imagery, but there is more than a touch of Art Nouveau, which can be seen in the use of a foreground illustration and a background of largely circular designs, strong mine work and bold, block colours. Some of the artwork is also reminiscent of the Family Dog’s psychedelic poster art that evolved in the 1960s (again echoing and reinventing Art Nouveau imagery).

The cards have a visual frame which consists of a narrow white border with looping circular designs in the corners. The frame gives way into a small half circle at top and bottom – these are the spaces for titles and numbers. The print on the back of the cards is in a textured, metallic mauve ink featuring circles of stars framed by Art Nouveau-style women with long, flowing hair in the top right and bottom left-hand corners. This is a symmetrical, reversible image.

The cards come packaged in a small box set – a solid cardboard box, the tarot cards, and a small guidebook. The box features a fold back lid with magnetic clasps to keep it shut. It is printed inside with images from the cards – whimsical, fey beings. There is a mauve satin ribbon attached to the base of the box which loops under the cards and facilitates their easy removal.

The 125 page guidebook is written by the artist Trungles, with all information given in English. The introduction gives a very potted history of tarot, and the tarot's origins. It also lays out the artist's interest in removing Orientalism from tarot imagery.

This is followed by a two-page chapter outlining the purpose of the Major and Minor Arcana, and the correspondences (broadly speaking) of each suit. ‘Instructions for Your Reading’ sketches out the basics of doing a reading, this is followed by a selection of three spreads – The Single Card Draw, a four-card past/present/future layout, and the classic Celtic Cross spread.

The remainder of the book focuses on the cards themselves and their divinatory meanings. In an unusual move, equal weight is given to all cards – there is no particular focus given to Major Arcana cards.

The Major Arcana cards have a one-page black and white reproduction of the card’s illustration, which accompanies upright and reversed interpretations. While the Minor Arcana are afforded much smaller reproductions, the divinatory meanings are as complex if not more so than those given for Major Arcana cards. Having said this, the interpretations do not fall outside of those commonly accepted as standard.

There are no keywords, no descriptions, no astrological or numerological influences – the information the Seeker receives is clear, practical, and unambiguous. In fact, Trungles states clearly that the Star Spinner Tarot specifically forgoes 'cosmic insight’ in favour of know thyself wisdom. It is intended to help the Seeker connect seemingly disparate events and understand a larger picture of their life.

Alternatively, if you are simply looking for a deck with a peaceful, calming vibe to it, featuring artwork that is both attractive and nonconfrontational then this is definitely a deck for you. It is suitable for both beginners and advanced users. A magical and enchanting tarot.