Star That Never Walks Around 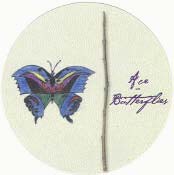 The Star That Never Walks Around is a non-traditional but readable round Tarot deck of 78 cards, with imagery shaped by Native American myths and legends.


Card Images from the Star That Never Walks Around 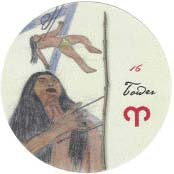 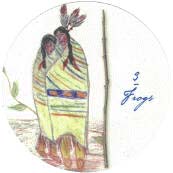 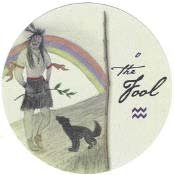 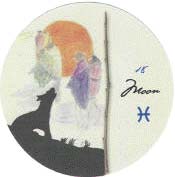 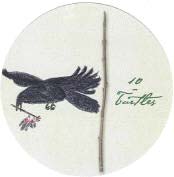 Star That Never Walks Around Review by Bonnie Cehovet


I have been eagerly anticipating receiving this deck for two reasons: it is my first Native American deck, and it is my first circular deck. I was not to be disappointed in either area - The Star That Never Walks Around is a deck that I immediately felt comfortable with, and was able to use with no problem. I was really interested in the thought of using a circular deck to see how that would affect Tarot "reversals". As I see it, with circular decks we encounter the full range of the card, and its meaning, without really having to think about "why".

The deck is 4" in diameter, which means that it can be handled, with a little thought, by those with smaller hands. I will have to work out the shuffling on this deck - not so much because of the size, but because of it's circular nature. The cardstock is good quality, glossy but not coated. Care would have to be taken in handling this deck or it will definitely show wear. (Now - the box that it came in - that will last for several lifetimes!)

Some of my favorite cards in this deck are the Nine of Turtles (Pentacles), which shows a figure shapeshifted into a Bear; the Page of Butterflies (Swords), which is depicted as a Kachina-like figure; and the Hierophant, which shows a White Buffalo, standing on an inverted triangle and surrounded by the compassionate color blue.

Ms Bennett does a very credible introduction to the cards: touching briefly on the history, what the Major Arcana, Minor Arcana and Court Cards represent, along with what the four suits represent. She also gives a bit of information about her background (Native American), how this deck came about, and how she came to be the, albeit reluctant, artist of choice. For me, this type of information sets the tone for the deck and the book that accompanies it. I am grateful to any author/artist who is willing to share of themselves.

There are some things that I would not necessarily have done - such as giving the physical characteristics for the court cards (eye, hair skin color). This is primarily because I see the court cards as parts of our individual psyches, and even in the rare instance when I will see a court card as representing someone else in the Seeker's life, I feel that it also represents a part of themselves. I am also not that sure that I would have Butterflies as the representative for Swords, but that is a personal choice, and I have already said that this deck was easy for me to read with!

The suits in this deck have some interesting associations. Color wise, Ms Bennett associates Green with Earth energies, Red with Fire energies, Purple with Air energies and Blue with Water energies. I can go with all but the Purple - and even that may grow on me! The suits are representative of Native American clans, with the mythology represented being related to Native American astrology. In fact, the entire deck is represented by the North Star, or Polaris. It is called "The Star That Never Walks Around" by the Plains Indians because it is fixed in the sky.

The shape of this deck came not from wanting to do a non-traditional Tarot, but from the symbolism that the circle plays in Native American myth and legend, representative of Mother Earth. As we follow the circular form of each card, we also follow the waxing and waning of the cycles of the Moon.

Incorporated into this deck is the theme of the seven directions (North, South, East, West, Above, Below, Within), along with a well done section on interpreting the numbers. The elemental qualities are as follows:


The LWB that accompanies this deck - is a not so little book! Six inches by six inches, 200 pages, and chock full of well written wisdom for reading the Tarot. I liked the inclusion of Life and Soul cards, and the astrological associations for the court cards. There is also a section on Karmic cards - which is well presented and well worth reading, even if one ends up not believing in the concept of Karma (which I definitely do!).

There are several spreads presented in the accompanying book, including the Celtic Cross, the Seven Directions Spread, and the Karmic Spread. I think that this range of spreads is certainly enough to give the reader a grasp on what this deck can do for them, and give them a good basis for creating their own spreads.

The cards are presented with black and white scans, followed by a discussion of the cards meaning, the message of the card, then the upright and reversed meanings. From the book:

The High Priestess stands in the reflection of the waxing Moon, which brings new things to light and reveals that which has been hidden. In her right hand, she holds the Moon's energies, bringing her intuitive and psychic abilities to light. With her left hand, she gives the stars (or enlightenment) to those who are willing and open to receive them. The High Priestess seeks her light from within, and relies on her intuitive and psychic abilities.

Native Americans rely heavily on the heavenly bodies to bring them the Spirits they seek. The Moon, which is governed by the High Priestess, carries magical energies for the Native American. The High Priestess, as I have her depicted on the card, is my spirit guide, Athabina, who is always available when I need support and guidance.

Message: Your inner knowledge unlocks the key to all you want to be. "Trust in your intuition."

Upright meaning: Ability to use intuitive and psychic resources. Don't try to hide who you are; be yourself in all situations for a more positive outcome. There may be things going on behind the scenes; check out all things related to the situation or circumstances.

Reversed meaning: Problems coming from lack of foresight. Failure to get all the facts. Look before you leap. For women: difficulty dealing with other women. For men: inability to deal with their feminine side. This card in the reversed position can affect relationships and signifies the need for a deeper commitment.

I highly recommend this deck as a worthwhile addition to any Tarot collection. It is a great deck for reading, for doing comparative work, for studying "degrees" of a card and for meditation.


Complete Details of Star That Never Walks Around


Similar Decks to Star That Never Walks Around