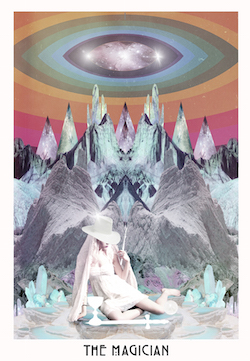 The Starchild Tarot is a unique and cosmic deck drawing on Starseeds, sacred geometry, self-healing, and the ancient mystery schools. The images and meanings were intuitively created by artist Danielle Noel, and the deck is designed to be a meditative tool for transformation and self-reflection. Self-published and available from the artist.


Card Images from the Starchild Tarot 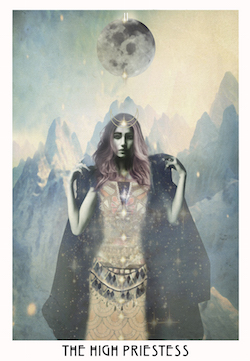 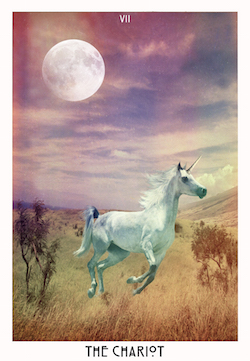 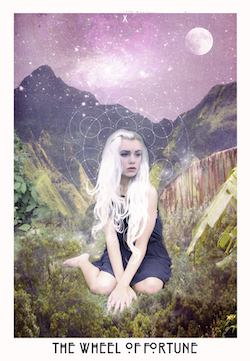 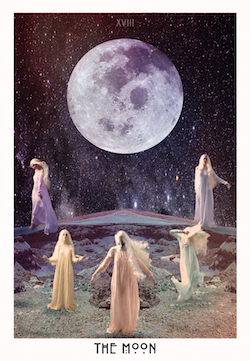 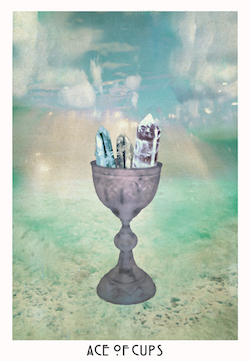 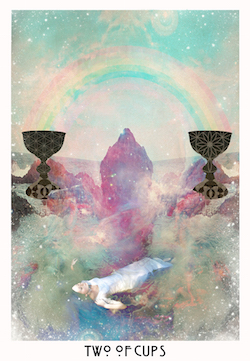 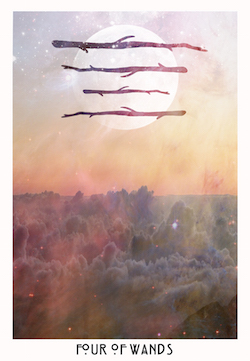 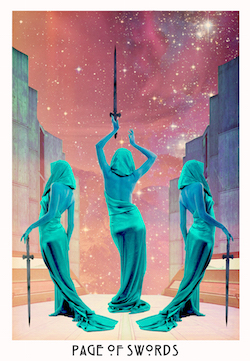 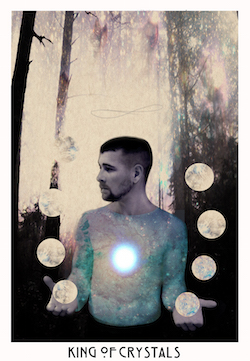 The Starchild Tarot is a self-published deck by artist and deck creator, Danielle Noel. It comes in two editions, the 1st edition and the Akashic edition. Both decks are reversible and the cards are exactly the same thickness and size measuring 12.5cm x 8.5cm roughly like a standard oracle card. I will be reviewing both decks at the same time because although the card backings are different from each deck, both decks, for me, are united, with many cards having the same image minus a few color touch ups and new symbols added.

The 1st edition card backings have a bluish purple color with images of many sacred geometry shapes. The Akashic edition has a girlish psychedelic color scheme with many pinks; purples and turquoises except these cards are matte gold gilded. They shuffle like most oracle decks and for those interested both editions will be available in standard tarot size format in the future.

The deck reminds me of a mix between the Sirian Starseed Tarot and Mystic Dreamer Tarot. Like in Starseed, many of cards have been renamed. The pentacles are crystals, the fool is starseed, death is transformation, hermit is serenity, the hanged man is perspective, devil is oppression and judgment is awakening. This is one of the reasons I purchased this deck is I can now use such cards as the death card at corporate events without guests and the client freaking out or having to remove them prior to an event.

Like the Mystic Dreamer Tarot, Starchild predominantly depicts images of females against a sky with a moon which I resonate with deeply.

Even though I’m a straight male, the deck has a strong feminine quality. Very few male figures appear on the cards but I have no issue with this. The color palettes for both decks contain many pinks, purples and blacks. One review I’ve read suggested both decks have an Aquarian and Pisces vibe and I’d have to agree.

A majority of the images from each deck are gorgeous to look at but are also extremely readable. I normally never recommend doing this but I highly suggest purchasing both versions of the deck in order to mix and match to create your own vision of the Starchild Tarot. Even though both backings are completely different I am confident this concept will work perfectly.

Perhaps one of the main reasons I was drawn to this deck is its uplifting nature. I was drawn to a lot of the so-called “negative” cards in the deck. This is an excellent deck to use for corporate events. For example, the 10 of Swords in the 1st edition show a woman who is still alive and no blood is present. The 6 of Swords in the 2nd edition depicts a woman staring into the unknown whereas the 1st edition depicts a woman standing on a moon with another moon in the horizon as if to say a person traveling to another world or universe is ready to make a giant leap in order to bring something positively new into their life.

One of my favorite cards is the 8 of Cups from the 1st edition. Typically seen in most Rider-Waite decks in a more sad feeling due to the color choices; this version is the complete opposite, showing a woman in a jungle following a trail of cups upstream. The jungle leaves are purple to signify a need to move on in order to bring more positive abundance into that person’s life.

Most of the cards from both decks encourage the person to make positive changes in their life because the overall energy they emanate are extremely magical and positive in nature. Even the 9 of Swords from the 1st edition provide an uplifting feeling in a strange way. We see a barren field with 9 swords floating above a mountain range. The image has a very cold feeling, which to me suggests that when we become stressed or depressed we cannot allow the light to come in. When we change our perspective things begin to grow and the dark cold feeling will turn itself into light, as depicted by the centre sword facing downwards with a strange upside down ray of sunshine emanating from the sword.

Perhaps my greatest issue I have with the Starchild Tarot is how hard it is to acquire due to its popularity and self-publishing nature. If you are considering purchasing this deck, get it now before it’s too late. This is easily one of the best tarot decks I’ve ever owned. I find most of the images on the cards I can see so much without the need of the booklet. The booklet is well thought out but for readers like me who like to just dive in a new deck, it will deliver in more ways than you can possibly imagine.

If you’re like me, you’re going to want the original size so you can really appreciate the beauty on each of the cards, even though I’ll probably get all versions in all sizes, it’s just that good!