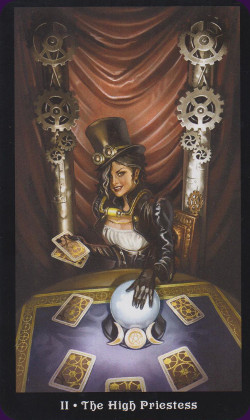 The Steampunk Tarot is a Rider-Waite based deck illustrated by English artist, Aly Fell, and with a companion book written by experienced tarotist, Barbara Moore. The darkly hued cards have a realistic mix of Victoriana, magic and mechanics in the tarot scenes, with tarot cards themselves featuring in several cards.


Card Images from the Steampunk Tarot 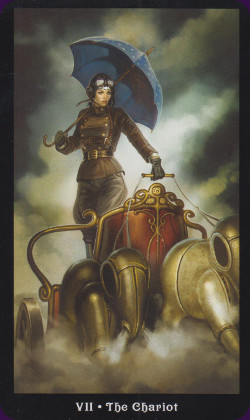 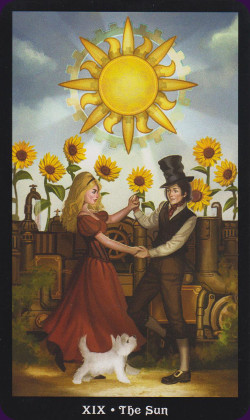 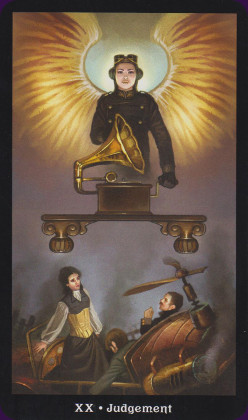 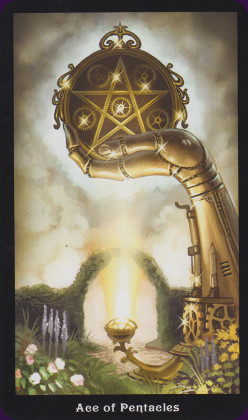 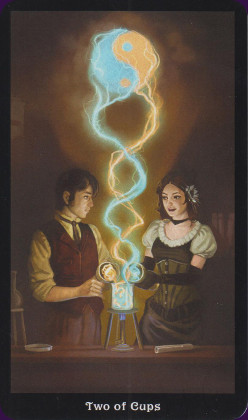 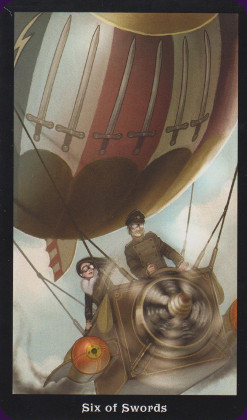 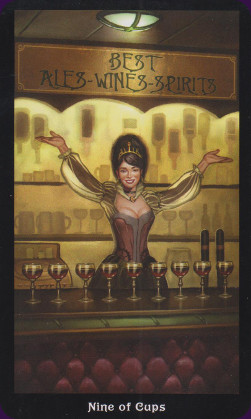 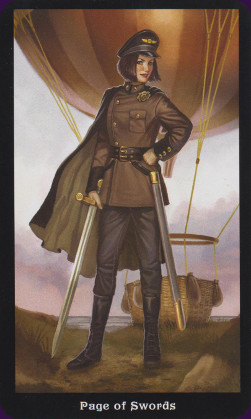 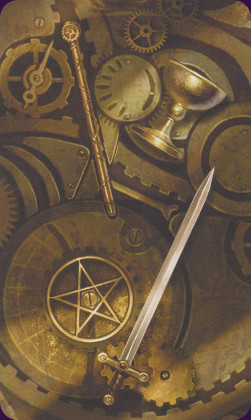 The “Steampunk Tarot” is a traditional 78 card deck that is steeped in the very untraditional world of steampunk. Traditional titles are used for the Major Arcana, with Strength at VIII and Justice at XI. The suits are Wands, Cups, Swords, and Pentacles, with the Court Cards entitled King, Queen, Knight, and Page. I am not a gamer, nor have I ever been. This particular world flew way under my radar! In her introduction, Moore notes that anyone with a penchant for sci-fi, and anything in Victorian clothing, will more than likely feel at home in this world. She also notes that while steampunk has its roots in the past, it continues to evolve in response to changes within our society.

I was interested to see that the seeds of the steampunk movement came from Victorian era writers such as Jules Verne, Mary Shelley, and H.G. Wells – all of which bring up fantastic reading memories for me! The term “steampunk” was brought into use in the 1980’s when writers were rediscovering the alternative worlds that “might have been”. Moore also notes that the setting for these worlds was traditionally Victorian London, but that this is changing. Personally, I love Victorian London and the Sherlock Holmes milieu!

The deck comes packaged with a 294 companion manual. The one quibble that I have with the packaging is that while a white pasteboard box is included to house the deck, it would have been much nicer if the deck had come in a box of its own. The box is done in tones of brown and gold, with an illustration of the Queen of Pentacles on the front (which very much reminds me of Barbara herself), and info about the book on the back. I love the phrase that heads this section - “Where The Past And Future Converge”! And the notation that the “Steampunk Tarot” offers a glimpse of the future through a lens to the past! This is indeed the Tarot at work!

I am going to do something a little different here. Barbara has penned such a unique table of contents that I am going to include it here, verbatim:


In her introduction, Moore gives the reader a bit of background for the steampunk genre, and discusses whether this is just a novelty deck, or whether it is more. She notes that all genres of decks reflect our current struggles and concerns as a culture. I have to agree with her here. While this deck will not be a major reading deck for me, I will use it to push the envelope in reading, especially when information may be coming, but is not flowing as smoothly as I would like to see. The new perspective that a non-traditional deck gives us is worth its weight in gold!

I love the scan that accompanies the chapter on Tarot basics – it is the Hierophant, which shows a very grandfatherly type figure seated in his chair, books on the table next to him, and a young boy and girl seated at his feet, paying rapt attention to what he is saying. This is a chapter in any book where I will say take with you what works, and leave the rest behind. There is good information here on reading the Tarot, but nothing is ever written in stone. What Moore does do is make you think, which is the most important thing one can do when reading the Tarot. (I am referring to reading in a conscious manner, not “over-thinking” every little thing.) I loved her suggestions that when practicing reading read for an imaginary querent (Seeker), pretend that a celebrity has asked for a reading, or use the Court Cards as people to read for.

The cards are presented with a full page black and white scan, a short sentence (called “flavor text”), which adds character to the card, the core meaning of the card (largely taken from Moore’s “Tarot For Beginners”), and a discussion/exploration of the card. Some cards will also contain a section called “reading tips”. These are hints to help enhance the reader’s reading experience.

While defining the Major Arcana are representing the theme of the story, and the Minor Arcana as the scenes and actions that carry out the theme, the Court Cards are seen as the people living, experiencing, and animating the themes, scenes and settings.

Spreads included at the back of the book include the one card spread, the three card Past/Present/Future spread, a seven card spread with one card that moves up and down the spread, the six card Panoramic Photograph (basically the first six cards of the Celtic Cross), and a five card spread called the Difference Engine (aka Magical Mesocosm). What is so very cool about the Difference Engine is that it incorporates the outcome card from the previous spread! I loved this idea!

The card backs are a muted brown/gold – rather antique/sepia looking. There are gears in the background, with the icons for the suits of Wands and Cups on the top, and the icons for the suits of Swords and Pentacles on the bottom. The backs are not reversible. The card faces have a Ľ” black border, with the Major Arcana showing the card number in Roman numerals and the card title across the bottom. The Pips (numbered cards) show the number and suit in text across the bottom of the card, while the Court Cards show the title and suit across the bottom of the card.

The artwork in this deck is digital, and just amazing! The colors are muted, and really make one feel that they are looking back into another century … or another world! The imagery is consistent throughout the deck, and features mechanical devices and gears of all kinds. The imagery in this deck is unique … at times following the traditional footsteps, at times not. The Magician, for me, is a card that is a bit off. We see a male figure holding a cup in his right hand, and a sword, pointed down, in his left hand. A wand lies on the floor at his feet, where he stands in the middle of a pentagram. This is the first card where we see the lemnescate, which in this deck literally glows! Very cool! The figure, however, does not carry the essence of the magical Magician for me … it more strongly resembles a stage magician. I also have a problem with the Empress, who is lying on a couch looking a bit wanton. The Emperor is appropriately reserved, and the Lovers is a gorgeous card showing a young couple holding hands, with an angel above them.

I adore the Chariot, which shows a mechanical vehicle with a female figure, standing, goggles on her head, one hand steering the vehicle and the other holding a beautiful blue parasol. Looks very “Mary Poppins” to me, but the parasol is actually supposed to be “steampunked” (modified with amazing gadgets and technologies, making it a useful weapon. Either way, it’s a great card!

The Hermit is very cool, with his lantern that glows, and appears to be smoking! The Wheel of Fortune is three gears within a larger gear – nicely done! Justice carries nice imagery (the female figure stands between two pillars, with mechanical scales in front of her. One hand is at her side, while the other is out,,, palm up, with Tarot cards appearing to fall from it. This card just does not resonate with me.

The Hanged Man has his arms outstretched over his head, but his leg is crossed, so the imagery still works. Death is a female figure, wearing white with black wings, riding a brown horse and carrying a scythe. There is a male figure behind her, with his back to her. This image works, if you stay with it long enough.

I adore the Devil, which shows a mechanized being running completely amok! The lightning struck Tower is another well done card that carries its message well. The Star shows a female figure in a black dress … which works very well! The Moon carries the traditional imagery of the moon in the background, the twin towers, and the crab. And the two animals. The Sun is also a solid representation of its energy, with a young couple holding hands in front of a fence with sunflowers behind it, a white dog at their feet.

One of the cards that I was ambivalent over was the Fool. Showing a chimney sweep in a tall hat, with a dog at his feet, I see more the court jester than the Fool. And yes, in many ways they serve the same function. The High Priestess to me looks like a stage magician’s assistant, seated between two pillars made up of gears, wearing a top hat, holding Tarot cards in her right hand, with her left hand on a globe, which is surrounded y Tarot cards.

The Hierophant I adore, with its image of a grandfatherly figure, seated, with books to one side, and a young boy and girl sitting raptly at his feet, crossed keys between them. The Ace of Wand is incredibly powerful, showing a mechanical hand grasping a wand with growth on one end. The Six of Wands is another powerful card, with a soldier riding a mechanical horse, carrying a lance with a wreath on the end, very much the victorious individual!

The King of Wands again looks a bit like a sneaky stage magician, standing behind his throne and looking out at the reader. The Two fo Cups – absolute magic! A male and a female figure are standing, facing each other. Each figure holds a cup, and is pouring something into the beaker on the table in front of them, Above them is a blue and white yin/yang figure, which is sending blue and white streams of energy wound around each other into the same beaker.

The Eight of Cups is soooo steampunk! We see a female figurein the forefront, goggles on her head. Behind her is a mechanical mechanism, with eight arms outstretched, an upright cup on each arm. Soooo H.G. Wells! Along the same note is the Six of Swords. Here we see a male and a female figure in a “flying machine”, with a big balloon over them.

The Page of Swords shows a female figure in uniform, standing, with a sword in her right hand (resting on the ground), her left had on her hip. A baton hangs at her side. In the background we see an air balloon. The Two of Pentacles shows a female figure riding a pennyfarthing bicycle (Incredibly high front tire, much smaller back tire. I love the way the lemnescate is worked into the image by acting as the chain between the wheels!

Last, but not least, the Queen of Pentacles. Another card that I adore – this queen is standing, her left hand on a railing, a fan in her right hand, wearing a very smart golden gown, with golden gloves. I would not mess with this lady!

This is a theme deck, and will not be for everybody. The imagery is very well done, and some people will collect it just for that. The accompanying manual is also well done, making the use of the cards a little easier (especially in the case of a reader, like myself, that does not necessarily connect with the imagery). It is not a learning deck, but can certainly be used to good advantage by mid-level or advanced Tarot readers.