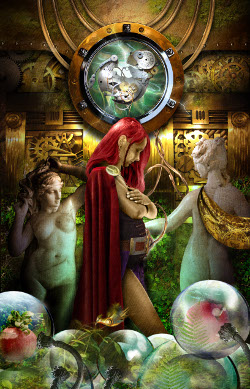 The Steampunk Tarot reveals an opulent and technological empire through the steampunk essentials of Victoriana, adventure and machines. The majors are linked with the Gods of the Machine, and the suits are Airships, Engines, Submersibles and Leviathans.


Card Images from the Steampunk Tarot 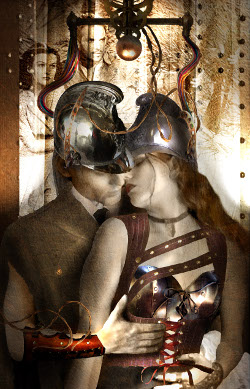 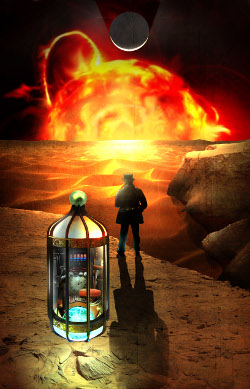 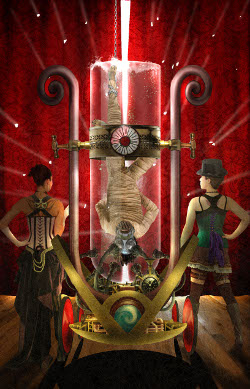 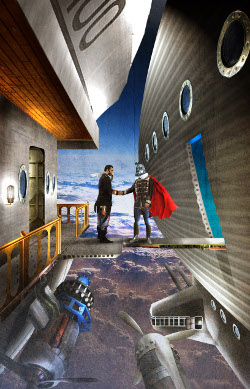 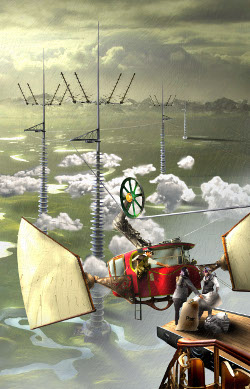 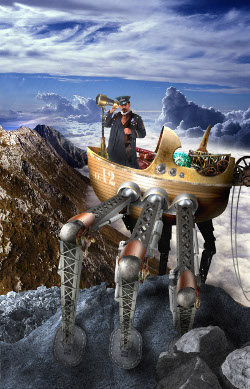 “The Steampunk Tarot: Wisdom from the Gods of the Machine” is a 78 card Tarot deck written by John and Caitlín Matthews and illustrated by Wil Kinghan. This deck is published by Tuttle Publishing. The cards measure 2.75 x 4.75 inches and the backs are reversible.

The cards are packaged in a sturdy box with a lift off lid. Inside there is space for the book and a plastic divider to house the cards. It was nice to receive a deck and book set with a box that did not have smashed corners. Additionally, the box can be stored without the fear of it being crushed or falling apart. The cardstock is fairly thick and should be able to withstand regular use. I had no qualms about riffling it.

The accompanying book is 160 pages of well-organized material for working with this deck. It introduces the Steampunk theme and provides some background information on the concept. The composition of the deck and correspondences for the renamed suits and Majors are also discussed. The subsequent sections of the book go through each of the cards in detail. In these entries the creators provide interpretations for the cards in different contexts, guiding new users toward possible messages for the cards they have chosen. A four card spread is also included for each Major Arcana card, and every card features a snippet of “Steampunk wisdom” that poses an introspective question relating to the card’s theme. Lastly, there is a section with spreads and some concluding thoughts for working with the deck.

I was very pleased with this companion book for its ability to be parsimonious yet packed with useful information at the same time. Its explanations and descriptions make the deck easier to work with and illuminate many of the creators’ ideas. The delivery of the information is passionate and makes getting to know the deck feel like an exciting adventure.

This deck’s artwork utilizes many photos in its composition. If you like real people and objects in your Tarot imagery this deck will really draw you in. However, if you prefer a more traditionally rendered deck without the use of photographic elements, you may be turned off by the artwork. The use of enhanced photos and other digital media is rather heavy. In some cards the objects look a bit “pasted in.”

There are lots of details to work with and the ideas for the compositions are unique and highly imaginative. This deck’s artwork can stimulate new interpretations and perspectives. The artist definitely had an elaborate and sophisticated vision for this deck’s mood and atmosphere. I find it to be delightfully gritty and mechanical – as a Steampunk deck should be.

One of my favorite cards is the Four of Engines. This card depicts a crowd of people at a train station. The scene feels lively and bustling. I can almost hear the crowds and machinery and smell the air. There is a quality to this image that I found immediately endearing. I also love the somber and poetic mood of card XV, “Cyborg.” In my opinion this is one of the most well executed cards in the deck. The figure’s empty expression and the lone tear escaping his eye are incredibly evocative.

This deck combines the framework of Tarot with the Steampunk universe described by the creators. The 22 Majors are the “Gods of the Machine,” the suits are collectively referred to as the “leagues,” and the court cards are called the “legates.” They are described as teachers or guides. The creators delve into the mythos of the Steampunk world and apply its themes to the cards in exciting new ways to flesh out the universe being depicted, as well as provide new insights for working with Tarot. I really like the way this deck injects ideas and philosophies that make it feel Steampunk, while still remaining true to the Tarot framework.

The suits and Major Arcana for this deck are thoughtfully renamed. If you are familiar with the attributes of the suits in a traditional deck it won’t take long to commit the changes in the Minors to memory. Engines are Wands, Submersibles are Cups, Airships are Swords, and Leviathans are Pentacles. The Court card hierarchy is Messenger, Navigator, Lady, and Captain. The Major Arcana have the Roman numerals on the cards in addition to the titles, which is a big help for working with cards that are more drastically reimagined. For example, the Death card is entitled “Spring-Heeled Jack” and the figure of death is not the familiar skeletal rider, rather it is a masked figure poised upon a rooftop.

The unique visuals in this deck make the theme feel more thorough and alive. Instead of being a Rider Waite clone embellished with Steampunk attributes, this deck pushes the envelope a little bit. Though it may be a bit intimidating to see so many renamed cards and unfamiliar scenes, many of the core concepts for the cards are familiar. The authors have built upon a foundation of traditional messages with thoughtful, practical questions and tidbits of information. The balance between the traditional themes and new ideas makes this deck user friendly as well as expansive.

Conclusion: The innovation in this deck is a delight. The creators dig deeply into the possibilities of a Steampunk deck and deliver a vision that is functional as well as thoughtful. The deck provides a unique and passionate representation of its theme. If you are a fan of Steampunk, this Tarot may truly delight you. While the artwork does not coincide with my personal taste, it is highly thoughtful, detailed and lively.