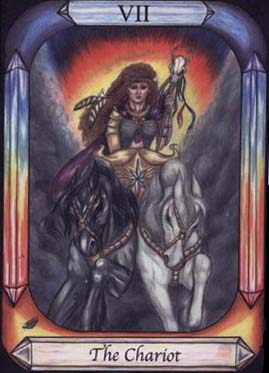 The Steele Wizard Tarot is a hauntingly lovely and lifelike looking tarot deck with 28 majors and 60 minor cards. Each card has a thickly ornate border which is decorated differently for the major arcana and each minor suit. Now available in a deck-and-book set from the artist. 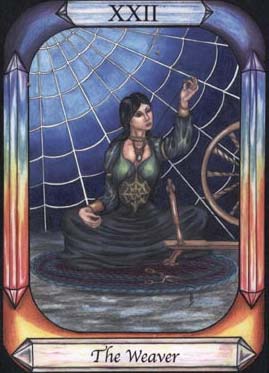 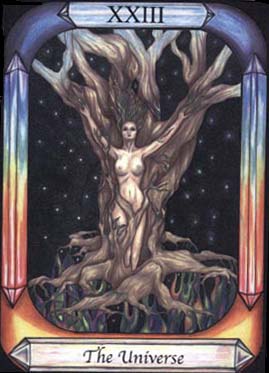 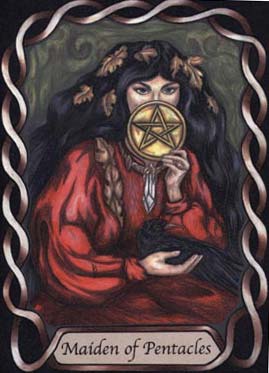 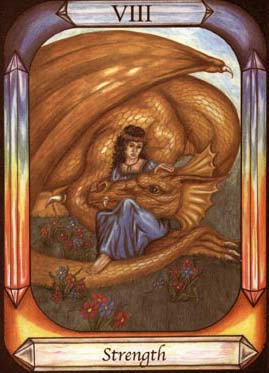 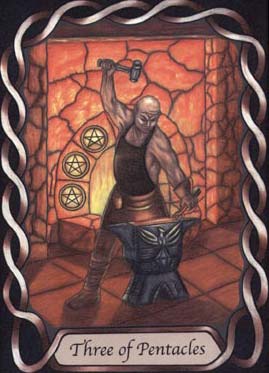 The "Steele Wizard Tarot" is an exceptionally well presented 88 card Tarot deck. The deck and companion book come in a sturdy cardboard box, which is covered in a brownish-burgundy covering. The sides of the box bear the deck name in gold script. The top of the box bears the deck and author information, in gold, and a beautiful graphic, also in gold. The bottom of the box bears a brief description of the deck, and comments from Maya Heath ("The Egyptian Oracle" & "Magical Oils by Moonlight"), Solandia, and alchemist Adam McLean.

The 110 page companion book is approximately 4" by 7", with a mirroring of the front and back of the box on the front and back of the book. In her introduction, Steele states that the "Steele Wizard Tarot" was designed to function as a means of communicating between the various aspects of Self. It is meant to help the individual Seeker function as a Whole Being, and to help the individual identify and "Win" their Personal Power.

The extra cards are the Maiden, which acts as an additional Court Card for each of the suits, and six cards added to the Major Arcana: The Weaver, The Universe, Truth, Soul Twins, Evolution and I AM.

In the beginning of the book, Steele addresses Tarot ethics, the "Care & Feeding of Your Tarot Deck" (ways in which the deck can be stored, and materials used, as well as whether or not to allow the Seeker to handle the cards, and how to clear a deck), formulating questions, the use of a significator, shuffling and dealing the deck, and suggestions for interpreting a reading.

The cards are presented with a color scan (approximately one-third of a page, which is an adequate size to be able to really identify the imagery), a section entitled Guidelines, which presents the basic energy of the card and keywords/concepts, and a section entitled Reversal, which addresses the nature of the card if it appeared in a reversed position. The Maiden addition to the Court Cards is presented as potential relative to each suit. From the book:

Guidelines: Potential leadership abilities. Possessing the natural ability of the athlete. Intellectual energy and positive aggressiveness are the "birthright" tools represented. A breath of fresh air in stagnate situations. This card may represent a young woman with these qualities.

Reversed: Overly aggressive. A potential bully. Unable to forgive oneself or others. Overreacting to imagined slights. Possibility of fear and/or hate being the motivating forces. Need to temper self with calm.

The function and meaning of the additional cards to the Major Arcana have to be intuited from the appropriate Guidelines section. The Weaver represents your destiny, and where you are on your path. The Universe speaks of the ability to access the Creative Forces of the Void. Truth speaks of the Seeker recognizing their own Life Truth. Soul Twins speaks of Self-knowing and of acknowledging Self. Evolution speaks of experiencing creation ... of knowing where and why you belong. I AM speaks of knowing the Divinity within, and being able to manifest it in outward expression.

The cards themselves are 4" by 5 1/2", of sturdy, glossy card stock. The backs are reversible, with a background color of black, with a silver graphic in the middle. The faces show an outer black border, with a twined inner border for the Minor Arcana that is color coded for each suit: Wands are gold, Cups are silver, Swords are blue and Pentacles are white. The border for the Major Arcana shows crystals on the right and left hand sides, with the top corner in blue and the bottom corners in gold.

The style of the deck follows the Rider-Waite-Smith tradition, with Strength as VIII and Justice as XI, and traditional titles, with the following exceptions: Death becomes Transition and the Devil becomes materialism.

The art in this deck is realistic, and looks to be done in water colors. The coloring itself is muted pastels. The imagery is largely Rider-Waite-Smith, with some variation. Each card is a nice mixture of reality and imagination ... quite easy to read with!

The Aces each show the suit icon with a vine twined around it. I was quite impressed with the Ace of Pentacles, which shows a Pentacle held in the middle of a circle, which in turn is seated in the trunk of a tree. Nice, complex imagery!

The Two of Wands shows an adult male, standing on a parapet, with water and hills in the background. He faces towards the read, looking to the left hand side of the card. In his right hand he holds a staff, with a second staff appearing behind his left arm. His left hand rests on what appears to be a globe of the world.

The Six of Wands shows a Knight on a white horse, with a staff held in his right hand. Four more staffs are behind him, and a sixth staff is being handed to him by a female figure standing at his side. His horse is wearing a purple covering edged in gold.

The Maiden of Wands shows a female warrior type figure standing in front of a stone structure. Both hands are on a thick staff that she holds in front of her ... her right hand on the staff, her left hand covering the crystal that tops the staff. There appears to be imagery etched into the staff.

The Four of Cups is stunning, showing a female figure in a purple dress, standing in front of a tree, with her hands tied behind her. peering out from behind the tree is a male figure with devil-like horns, bearing a tray with four golden cups.

The Four of Swords shows a figure kneeling in front of a large stone face, sword in his right hand, with three more swords lying on the stone floor in front of him.

The Six of Swords is stunning, showing six swords upright int he sand, with a boat moving through the water, headed towards a castle on an island. Two fish are jumping int he water, and a clear path shows from the waters edge up to the castle.

The High Priestess shows a female figure with dark hair, standing in water. In her right hand she holds an object, while her left arm is raised to touch the moon. There are stars in the night sky, with rocks to her right hand side, and some type of animal figure straight in front of her, coming from the rocks.

The Emperor is seated in a throne made from the base of a tree, which is stunning imagery!

The Sun shows a winged white horse, with white flowers beneath him and an orange-red sun behind him.

The Weaver shows a female figure seated at a loom, with her right hand in her lap, holding the material she is weaving from, and her left hand held in the air. In the background we see a large spider's web ... as if this is what she is weaving.

The Universe shows a nude female figure, standing, entwined in a tree ... as if the two are one.

I did find the deck a bit difficult to handle, as I have small hands. I would also have liked to see more information presented on the additional cards, and a brief synopsis of the symbolism used in each card.

All in all, this is a gorgeous deck that would appeal to collectors and readers alike. This is a great addition for any Tarot library!