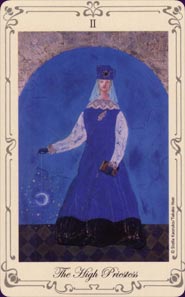 Stella's Tarot is the 78-card version of the deck by Stella Kaoruko, previously published in a 22-card edition. The art is colourful, pretty and detailed, with a reasonably traditional basis to the symbolism on its 78 fully-illustrated cards.


Card Images from the Stella's Tarot 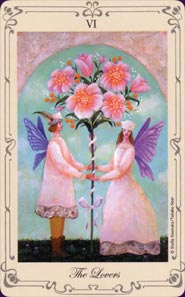 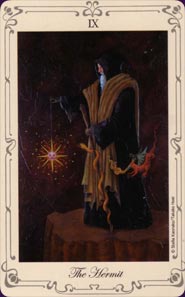 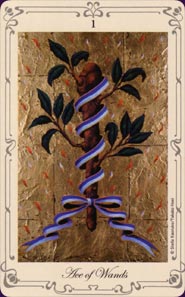 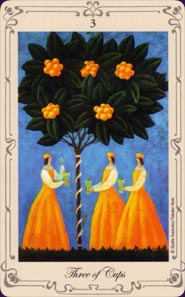 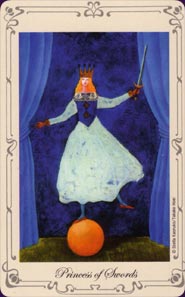 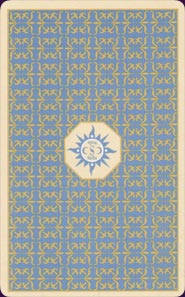 My favourite deck started out, for me, as the main star of an award-winning Korean drama — popular around the world now that it is available in English and other languages. The tagline from the film, recurs throughout, redolent with Tarot symbolism: "Listen to the trumpet of the judgment, an edge of truth will pierce your heart."

Mawang (translates roughly as "The Devil") is a sizzling, sexy, and slick murder-mystery drama in 20 episodes that would put Hollywood's best to shame. It aired in the top spot in Korea, Hong Kong, Japan, and is now making it's way around the world. To say that the drama is visually captivating and brilliant is simply an understatement. The DaVinci-Code like "clues" and the tie-in, in every episode, to Stella's Tarot is gripping. The actors are genuine actors, not stars, and they emote the most genuine emotions. And, best of all, a Tarot deck is also a major star of this popular drama.

It's clear why. If you watch this drama, which won best drama, best actor, best art direction and on and on in Asia, you'll recognize the sheer artistry of the art director and film director. It's beautiful to watch. Even the music is impeccable. The acting is the real thing, beyond ordinary. The art director, obviously a perfectionist, chose this deck as the most eye-pleasing and mysterious deck she could find for the shooting. It was a good choice for the drama. For the same reason — brilliant artistry — it is the right deck for my Tarot card collection.

When I saw the deck on the very first episode, I knew I had to add this to my collection of 128 decks. If you haven't seen the drama, a quick view of the opening credits (see embedded video), will tease you to find a way to download this drama.

My favourites tarot decks in my collection have remained the same for years, despite additions every month. However—and not because of the drama—I have my new all-time favourite, trumping all others.

Stella's Tarot has just the right mix of Rider-Waite symbolism, rendered in original art with a refreshing and polished style. Stella Kaoruko is a real artist, no wannabe. Her artistry is best described as Euro-Asian inspired, framable fine art, not commercial illustration. There's nothing commercial about this deck. Either the art resonates with you, or it won't, like any art. Commercial illustration usually appeals somewhat to everyone. Real art, isn't so barren. To me, Stella's Tarot is painted art — nary a collage or digital pixel in sight—and it is magic.

Sacred symbolism is intact, however, important to me and many traditional readers who value symbolism that is consistent with our understanding of Tarot. There are no surprises there. The surprises are limited to a truly unique execution.

A good example of unique style combined with traditional symbolism is, arguably, the deck's scariest card. The tower, here, manages to look frightening, consistent with the symbolism, but also eye-pleasing, with the stylized flames, majestic storm clouds, all-seeing eye and falling people. The rich, red sky, ads, in my mind to the flavour and symbolism of this card.

One of the most uncomfortable cards in most decks is the Devil, often renamed because readers often don't like the symbolism to begin with. But here, Stella brilliantly pains a devil, with bat wings, but juxtopositioned to a body with a cosmic sky, anchored correctly with Saturn, and—interestingly—the "devil here has a third eye, indicating an enlightened being. This is not biblical Satan, but clearly symbolic of something much deeper.

What an interesting Lover's card, unlike any I've seen before. Here, the lovers appear to be possibly faeries on one hand, but on the other we see a giant flower, drawing two people who are also "butterflies" like butterflies to the blossom.

Perhaps the most beautiful painting of the hermit I've ever seen, used prominently in the opening credits of the Korean drama. You can look at this card for hours and see something new. This would be true of all the cards in the deck, but here particularly so, with little details like the snake climbing the staff, the little dragon, and a Medieval sun standing in for the lantern. Again, colour choices enriched the symbolism.

The High Priestess reflects the Hermit nicely, holding instead of the sun as a lantern, a Moon surrounded by the starry cosmos, carrying a book in place of the Tora scroll. In the drama, the High Priestess was played by one of the main characters, who was psychic and helped the police sort out the puzzle.

Possibly my favourite card, a colourful man reminiscent of the fool, with a dragonfly on his shirt, hanging in the classical pose with leg crossed, but innovatively juggling planets from his outstretched hands—very correct and rich symbolism in my opinion.

Death here, is classical Death with a psyche, but surrounded by an amazing montage of meaningful "life's images" and carrying an hour glass, symbolizing perhaps impermanence and the fleeting nature of life.

This is a deck for those who are perfectionists. Often, I buy and review a deck with lovely art, spoiled by heavy-handed graphic design, typography and borders. Or worse, compromised by particularly poor paper stock and printing.

I was pleasantly surprise to find every detail appealing here, from the subtle powder treatments, off-white stock (enhancing rather than detracting from the paintings), lovely typography, and a subtle, elegant card back in refreshing colours that do not betray reversals.

Overall I have to give this deck a ten out of ten, this artist major props, and the drama a 9 out of 10. This is my favourite deck today, and will likely remain so for some time. It is usable by anyone, from novice to expert. For novices, it maintains the traditional Rider Waite imagery in a beyond-pleasing artistic rendering. For experts, it ads new layers of symbolism. For intuitive experts, the cards are simply vibrant with a life of their own.

In case you are curious about the drama, here's my review. This aired in 2007, but is now making the rounds Internationally with well developed subtitles. The drama begins with a bizarre and dramatic murder. The police are teased with various tarot cards at each subsequent scene. Brilliantly, the killer never kills on his own, but engineers it so that other people—who dislike or hate the victim—are churned into a sufficient frenzy to do the dirty deed. Each one of these perpetrators is arrested by the main character Oh Soo, but he must keep hunting because he discovers the "manipulator", as he's called in the drama, is pulling the strings and will engineer another murder.

This is a rich moral fable, wrapped in a police drama, where—typical of most Korean dramas—the characters are very rich, deep and actually grow and change. Where Hollywood might be about happy endings and pretty characters, Korean dramas tend to be gritty, arty, exciting but true-to-life, but—above all—rich in character. This is why every single Korean drama ends up being a hit all over Asia, the biggest market in the world.

Here, there are plenty of shades of grey, with characters genuinely inspired by the Tarot. Oh Seung Ha, the "bad guy" is highly sympathetic, with his entire wretched life explored, and while he may begin as a serial killer type—but only targeted at those who "deserve it"—he actually draws tears with his heartfelt repentance. He is also not who he seems throughout, giving the viewer plenty to think about. Oh Seung Ha is acted by Joo Ji Hoon.

On the other end of the character is an equally grey "good guy", Kang Oh Soo, the cop, who actually was a murderer once, a murder that started this entire tragic tale. Much is made of "hell" as a state of mind, and how he is living in his own hell because of his impetuous act as a teenager. He is a genuinely likeable guy, but with a dark temper and he, too, grows immensely through the drama. Kang Oh Soo is played by the popular actor Uhm Tae Woong, an actor able to bring tears with a single puppy dog look.

In the centre is Oh Seung Ha, librarian and a psychic, In the drama, she is also the artist creator of Stella's Tarot, which gets her involved when a serial killer uses Tarot cards as teases to the police. Seo Hae In has very powerful and believably recreated visions that help and hinder the police, and is hopelessly torn between her emotions for both of the "grey" characters, Oh Soo and Seung Ha. Seo Hae In is acted by Shin Min-a.

It is produced by Park Chan Hong, scripted very creatively by Kim Ji Woo and stars three of Korea's top actors (all of them sexy, by the way!) Uhm Tae Woong, Shin Min-a and Joo Ji Hoon. And, of course, Stella's Tarot, which arguably is the main character.