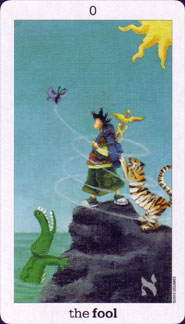 The Sun and Moon Tarot has colourful, undistracting illustrations and a definite Thoth influence. Major arcana are linked with Hebrew letters, and the minor arcana with elemental symbols. A useable and unexpectedly appealing 78-card deck.


Card Images from the Sun and Moon Tarot 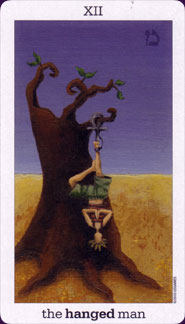 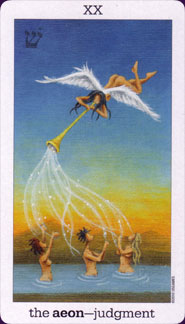 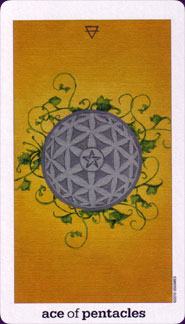 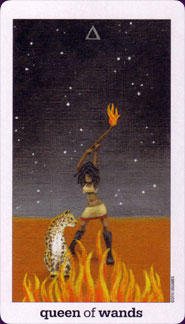 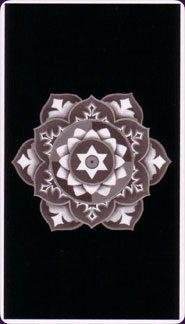 My first thought when I heard the name “Sun and Moon Tarot” was that this was a deck that covers a lot of territory! The space between Sun and Moon to me is akin to the distance between “A” to “Z”! I was not disappointed.

The artist, Vanessa Decort, has worked as an illustrator for children’s books and a designer of book covers. She now teaches art classes at the Academy of Art while pursuing her own projects. Her first Tarot deck was the Thoth Crowley, and that influence does show in this deck. The impetus to create this deck was to deepen her own understanding of the Tarot, and to share it with others. Her illustrations explore the worlds of fairy tales, myths, and fantasy, as well as personal experience. Her interests include astrology, Jungian psychology, alchemy, Kabbalism and symbols.

This is a traditional 78 card deck, with the Major Arcana carrying the traditional titles, Justice as VIII and Strength as XI. (Some cards have two titles – Death/Rebirth, Art/Temperance, and Aeon/Judgment.) The suits are Wands (Fire/Spiritual), Cups (Water/Emotional), Swords (Air/Rational) and Pentacles (Earth/Material). The Court Cards are Princess, Prince, Queen and King.

There is no book with this deck, other than the LWB (Little White Book). The cards are presented as text only, no scans. An example of the Major Arcana is as follows:

Linked with Uranus, Associated with principles of courage, ecstasy without fear. Acting impulsively. Encourages us to take risks and to develop our female and male sides to reach wholeness. The tiger is the oriental symbol for fear. This card depicts Caduceus, the staff of Mercury or Hermes, and the Egyptian wand of vision. It represents intuition, health, well-being and healing. The butterfly and the spiral symbolize the transformational process. From caterpillar to butterfly, the self grows and evolves. The crocodile denotes creative vision and strength. The sun and sea unite fire (energy/vision) and water (feelings). The Hebrew character Aleph is the symbol of the ox, and represents wholeness.

From the Minor Arcana we have:

Moon in Libra. Repose, meditative spirit. Decisiveness in making choices. Closed yoga pose shows avoidance of communication, and the need for inner balance. Make a balance choice between the two contradictory possibilities, by finding the answer within.

Water of Water. Emotional integrity. Love and sensuality. Queen of love. Feminine cycles and intuition. The water and the reflections indicate Spirituality – “As above, so below.”

The spread that is included in the LWB is the Sun/Moon (Yin/Yang) spread.

The cards themselves are 2 ľ” by 4 ľ”, and of good quality card stock. The backs show a Ľ” white border, surrounding a black background with a gray and white mandala in the center. The backs are reversible. The card faces show a Ľ” white border. The major Arcana show the car number in Roman Numerals on the top of the card, the title on the bottom. The Pips (numbered cards) show the Thoth keyword at the top of the card, and the card number and suit at the bottom. The Court Cards show the title and suit at the bottom of the card.

The artwork is somewhat primitive in style, with the unique distinction of there being no faces on any of the figures in the deck. The symbology comes from astrology, alchemy, freemasonry, the I Ching, Runes, yoga and Hindu wisdom, Egyptian and Greek mythology, and numerology. Each Major Arcana card shows the associated Hebrew letter. The Pip cards depart from strict Thoth imagery in that they carry both suit icons and small scenes, along with their elemental symbols. This is a nice, whimsical deck, but the coloring to me came off as a bit “flat”.

The suits are color coded: Wands show a dark background, with bright orange flames at the bottom of the card; Cups show a bluish sky and greenish water; Swords show a beautiful light blue background, and Pentacles show reddish-gold in the upper part of t he card, with green at the bottom.

I love the esoteric nature of the Tarot, so I was pleased with the various symbols that showed up on these cards: the bees (vision) in the card of the Emperor, the Yin/Yang symbol on the scales of Justice, the snake wound around the alchemical egg (the Lovers), and the snake (transformation) in Strength. I found it very interesting that the Magician in this deck very strongly resembles the Magician from Joanna Powell-Colbert’s “Gaian Tarot”, with the inclusion of the drum and the force of elemental Fire.

Some of the cards that I found interesting were the Queen of Wands (holding a lit stick of fire above her head), Aeon/Judgment (with the figures standing in water, with their arms raised to the angel with the trumpet above them), Universe (with the dancing Shiva figure), the Chariot (drawn by a white bull, which also appears in the Hierophant), the Four of Wands (with the four spikes of the wheel showing balance, structure and harmony), and the Two of Cups, which shows a male and a female figure seated in the middle of a lotus flower.

I found this to be a deck that was interesting, and easy to read with. It would appeal to collectors, and to people looking to go outside the box with Tarot imagery. (The symbols and images in this deck are multi-cultural.) While it does stay true to traditional structure and meaning, I would not recommend this deck for beginning readers.

Sun and Moon Tarot is one of those decks which have the capacity of enchanting us as we open the box!

When a friend first brought it to Brazil and I could see the box, I got amazed by the crocodile with figures on the Fool card. I loved its face and though: what a wonderful thought of what lies on the abyss. So, I got it! And as the Fool moving, I opened it and have already made some readings. To the best effect.

The deck is a 78 card deck and the artist, Vanessa Decort, whom the first deck was a Thoth Tarot, made her own deck a bit of a reflection of that. But it is not a simple reprodution or a revisit to the Thoth deck... not at all! This deck has its own personality and for the ones who are used to the Thoth Tarot there is an immediate relation, mainly to the minors.

The deck is also standard size and it is easy to handle and to suffle. Sometimes, I fight with the box it came in. As for the book, there is only a booklet, a LWB, and it talks a bit about the concepts and ideas the artist had when she built this beautiful deck.

When you go trough the deck, some things are very strong on the cards: the colors and how blue or orange or green they can be. What I mean is that the cards have bold colors and they build the mood of each arcana for real. Another point is that all the human figures have no face, no expression. And if one may think that this makes the cards vague or poor, it is absolutely the opposite! They can lead you into many different perspectives: how you are looking at the cards or even, how is the querent looking at the cards. The expressions are yours or your querents's.

It is a lovely deck and I feel it suits the collector, since it has an inspiration on the Thoth Tarot. I also would recommend it to

the ones who are proficient readers, due to the possibilities given by the figures and colors. For the begginers, it is good deck if you feel like trying this not so traditional deck.

I have to say I love it and I tell everyone I know to try it... it gives gentle touches even to cards which can be scary, such as the 3 of Swords or the Tower.

The Sun and Moon Tarot is a more feminine deck with illustrations that are soft and flowing. There is an impression of boundless space in this deck which helps to free the imagination and intuition.

Major Arcana - The cards have traditional tarot titles. Three cards have two titles (Death/Rebirth, Art/Temperance, Aeons/Judgment) Each card is linked to a symbol from the 22-character Hebrew alphabet, an astrological sign, and displays the Roman numeral at the top of the card and the title on the bottom of the card.

Pip Cards - The cards have beautiful scenic illustrations which includes the suit symbols Each card displays the elemental symbol for each suit, a key word at the top of the card, and the number and suit on the bottom of the card.

Court Cards - They are Princess, Prince, Queen and King, and have the title and suit on bottom of card.

Suits - Wands are Fire/Spiritual, Cups are Water/Emotional, Swords are Air/Rational, Pentacles are Earth/Material. Each suit is linked with astrological signs and is colour coded.

The Sun and Moon Tarot comes with an instruction booklet which also includes the Ying/Yang spread.

Samples of entries from the instruction booklet:

XII The Hanged Man Linked with Neptune. Associated with breaking away from old habits or reversal. You can flip the values of society or break through them. Hold on to something that is larger than your personal power, namely a higher belief or a new point of view. The tree symbolizes the kabalistic tree of life, or the Sephirot in Judaic mysticism. The ankh is the Egyptian symbol of infinite vitality. The yoga pose, shown upside down, is the Tree. The Hebrew character Mem represents water.

Three of Pentacles: Works Mars in Capricorn. The artist at work. Technical knowledge and mastery. Recognition and success achieved through persistence and focus.

Queen of Wands Water of fire. Self knowledge, self fulfillment and transformation. The dark spots on the leopard reveal the dark sides of the self. The strong stance denotes power and self assurance.

I would recommend this deck to readers who already have knowledge of a more classic deck, and readers who would like to gain more diverse insight into tarot through multi-cultural images and symbolism.

The Sun and Moon Tarot is also a gentle lead into the more complex Thoth Crowley whose strong influence can be seen in this deck. The two decks compliment each other well, if both are used together in a spread.