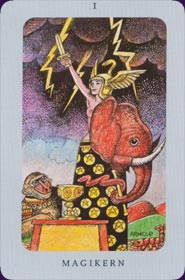 The Jolanda Den Tredjes Tarot, or Swedish Witch Tarot, is an esoteric Swedish deck of detailed illustrations. Designed by Rosie Björklund (Jolanda Den Tredjes), a famous Witch in Sweden, in collaboration with artist Hans Arnold. Originally released as a 22-card deck in black and white, a 78-card fully coloured deck is also available. 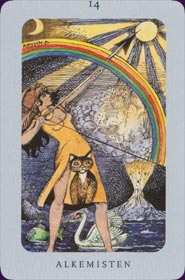 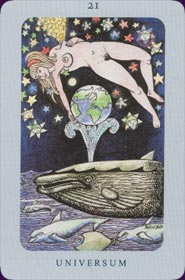 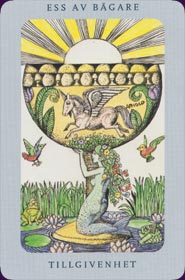 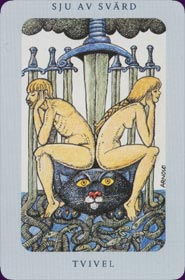 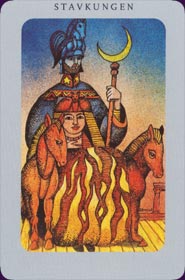 The Swedish Witch Tarot is a quality deck produced in Sweden. The detailed artwork consists of coloured pen and ink drawings and has an exuberant, quirky feel to it.

The cards follow a mixture of traditions. Justice is 8, Strength is 11 and the Fool is numbered 0. The court cards appear to be King, Queen, Prince, Princess and suits appear to be Cups, Staves, Wands and Coins. I say appear to be because the deck is available only in Swedish. Major arcana titles are mostly traditional, as far as I can tell, although the World seems to be the Universe, and Temperance has become Alchemy. There may be other differences that I have not noticed because of my lack of Swedish.

The cards are rich with symbolism. The Judgement card has angels blowing their trumpets, and a woman who has recently given birth - the baby is still attached to her by a cord, although it is a stork that is carrying it. The Lovers card has two clothed lovers, posed side by side. The woman has snakes and an egg at her front; the man has an eagle and carries a spear. Cupid is aiming his bow at the woman and in front of them is a cup. This is a deck that repays detailed scrutiny.

The minor arcana too are full of unusual details. Small animals abound and many of the cards in the coin suit have small blobby creatures in the pictures. Meanings are not always traditional, for example the four of cups shows a pregnant woman with a baby in a yellow circle in her belly and her hand resting on the babys head. The meaning is given as patience. Some cards are more obscure, such as the two of coins. The top part of this card shows two coins floating above a barren land. A line separates the bottom third of the card, and this shows two feet standing on tree roots which are inhabited by the little blob creatures. I am told that the key word on this card means change.

This is not a deck for anyone who is offended by female nudity. Several of the cards show nude or partially clad women. The most graphic card is the universe card, which shows the Sky Goddess reclining naked in the sky with one breast spraying milky stars into the sky. Her entire body is fully detailed and is clearly that of an adult woman.

The card stock is flexible, shiny but not sticky, and pleasant to handle and shuffle. Card size is approximately 11cm x 7.5cm. The card faces have plain grey borders containing the number and title (major arcana) or number, suit and key word (minor arcana). The language of the deck is Swedish.

The card backs are predominantly a strong aqua blue, with some grey. They are adorned by a dragonfly with a womans body and head, holding up a yellow pearl. They are not reversible. There is no instruction book but there are two cards one of which carries publication details; the other card contains information that appears to be about tarot generally. The card box is sturdy, lined in blue and with a thumb catch on the lid. It looks like it will last well.

The deck has many pictures of great beauty and works well as an art deck. Some cards are easy to interpret because their strong images immediately elicit a response; others are less easy to read. However, the level of detail in most of the cards makes them look as though they would be suitable for intuitive readings. I have to say, though, that I do not find this an easy deck to read with. I find I get much better readings from the relatively poor quality Zerner Farber cards, or the uglier Medieval Scapini. Nevertheless, it has pride of place in my collection as an amazing, quirky, sometimes beautiful, always interesting deck.

To purchase, the publishers website is at http://www.fischer-co.se/. For non-Swedish speakers, to find the deck: click on B (Bokfget), click on Titlar (side menu), click on Tarot. The publishers have an English speaker on staff who is very helpful.