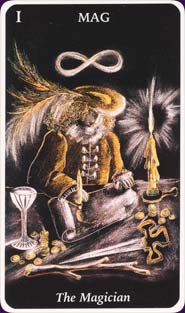 Also known as Tarot of the Radiant Path

The Swietlistej Drogi Tarot is a Tarot of 78 cards from Poland. Its illustrated art is dramatic and unusual, with fine yellow and white brushstrokes set entirely on black backgrounds. Titled in English and Polish. 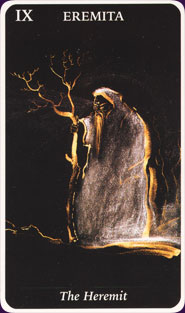 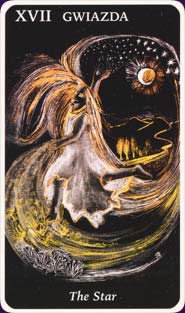 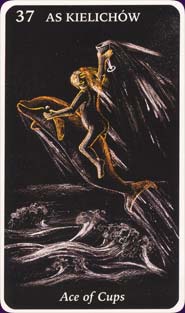 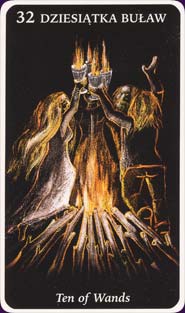 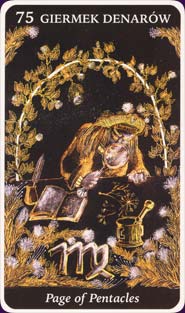 The Swietlistej Drogi deck comes from Poland. It is composed of the standard 78 cards - the 22 Major Arcana and the 56 Minor Arcana, the latter being divided up into the usual suits of Wands, Cups, Swords and Coins. The Minors are fully illustrated - a nod to Rider-Waite - but Justice is numbered 8 and Strength is numbered 11, a nod to the Marseilles tradition. The titles of the cards are in Polish and English. The most striking thing about the deck-at first glance, anyway - is its limited colour palette. Apart from a rainbow on the Fool card, the entire deck is composed of white and yellow-gold on a black background. I had my reservations about this to start with, but the limited colours really seem to enhance the images, all of which are in any case rendered beautifully and in great detail.

The most obvious thing about the people in this deck is that they are black-skinned. That seems very odd for a Polish deck! Is it trying to exoticize people of African descent? I honestly don't think so. The backgrounds on these cards are not African or Caribbean or pseudo-versions of Africa or the Caribbean or the Deep South or Harlem. They are not Polish landscapes, either. In fact, apart from the outline of hills here and there, and a toppling Tower on the Tower card,they are not really landscapes at all. I'd prefer to call them mindscapes,territories in which dark fights light, despair exists in close proximity to radiance and joy, and archetypes slug it out between themselves.And though the people have black skin, they are just as likely to have golden hair too.They even have golden lips and eyebrows. (I'm aware that the accompanying book, which is only in Polish - a language I don't read - may explain all this quite differently.)

So let's consider a few cards. The Chariot is a vital, vibrant card, full of movement and (potential) chaos. A woman rides in a brilliant golden chariot pulled by two grey-black horses. The woman's tunic is yellow-gold, so are the reins she holds and the horses' bits. Golden hair streams behind her in an uprush of vitality and motion. The horses kick up silver sparks with their hoofs. No, it's not an image that deviates from the Chariot "norm", but it is done very well, conveying atmosphere superbly. The Hermit ressembles a sage from a Japanese painting. He looks mournful - or is that just pensive? He holds the trunk of a tree very firmly, as if he's gaining all his strength from it. And while we're on the subject of strength, the Strength card is one of my favourites. The lion on this card has a mane so long and abundant that it curls round to form the upper part of the traditional lemniscate. And he's not a subdued lion but rather grand and powerful. As is the woman next to him. Judgement embodies the idea of rebirth and renewal beautifully. There is a person dying - but sitting up in a chair, oddly, rather than lying in bed - and this person is wearing a golden crown, though there's no other hint of monarchy in the image. They are surrounded by people of all ages who have come to say farewell - there is a baby, a child, a flamboyant teenager and then several adults, culminating in an extremely old man with white hair. In the background, an angel waits. The scene is one of peace and, yes, joy. I like it very much. The Court Cards are equally well-made. My favourite is the Knight of Cups. Rather bizarrely, he does not have a horse. Instead, he's diving underwater to retrieve a cup and - rather oddly - a sword as well. Fish drift by. A superb black-and-yellow octopus observes the scene. The rather impetuous nature of this Knight, and his adventurousness, are conveyed beautifully. And the Pip cards, unlike Pip cards in many otherwise good decks, have not been rushed - they exhibit the same attention to detail and, more than that, passion as the other cards.

Who would these cards suit? Anyone, I think, who is at ease with fully-illustrated Minors. If you respond to beautiful artwork (I know that "beautiful" is a subjective term) I'd urge you to seek out this deck. I would have reservations about recommending it to a beginner or near-beginner because there is no rigid adherence to traditional systems. More importantly, the book is only in Polish - you do really need a grasp of the basic interpretations first.

But is the deck "just" an art deck? Emphatically not.I've done several readings with it - ranging from "Card-For-The-Day" to a spread involving seven cards, and I've been very pleased with the results. And I've also been pleased to find how good these cards are for meditation - not over-large but with very clear images which have real weight at the same time as being rather dreamy and poetic. "Swietlistej Drogi" by the way means "Radiant Path", which sums this deck up very well. The colours and images make it radiant. And because it doesn't seek to embody a specific spiritual tradition, it could find a wide audience. Initially, I felt frustrated about the book I couldn't read but I must say now that its very unreadability has been a bonus - it's got me looking much more at the cards themselves.

The Swietlistej Drogi Tarot deck can be ordered from Tarot Garden. I don't know how many Jeannette has left - she orders them from Poland and I understand that that's a rather laboorious process.If you're interested, I'd urge you to hurry.I don't think you'll regret it.