The Syzygy Oracle is a 32 card deck linking Tarot, Kabbalah and the Sacred Feminine. It has ten cards linked with the 22 major arcana, and ten cards connected with the ten sefirot of the Kabbalistic Tree of Life.

Card Images from the Syzygy Oracle 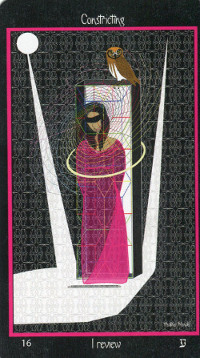 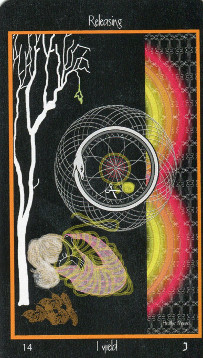 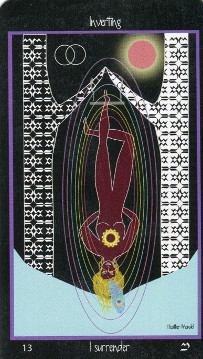 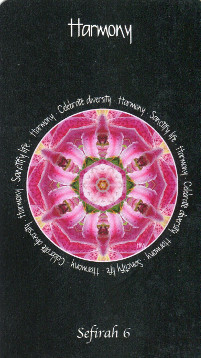 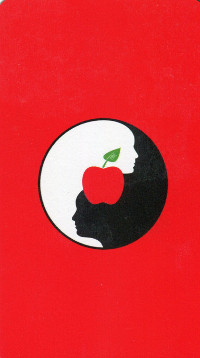 “The Syzygy Oracle” is a thirty-two card deck based on the twenty-two cards of the Major Arcana of the Tarot, and the ten sefirot of the Tree of Life. It carries a strong connection between the Tarot and the Kabbalah (the Hebrew letters and the pathways on the Tree of Life), and the Sacred Feminine.

“Syzygy” (pronounced “scissor gee”) is a term that Jung used to describe the balancing of opposites. Astronomically, the term refers to a specific conjunction of the Sun, Moon, and Earth. From the back of the book: “Solar energy evolves the ego and lunar energy evolves our essence. We learn to balance the two as we travel the twenty-two pathway’s of Kabbalah’s Tree of Life.”

I am impressed with the honoring of the Sacred Feminine in this book. It is offered as a spiritual practice, rather than simply a concept. When we involve something as a spiritual practice, we take it deeply into our life. It “becomes us”. In the case of the Sacred Feminine, we are opening ourselves to intuitive wisdom. Here, the patriarchal lineage of the cards has been lifted and reinterpreted from a feminine perspective. Through aligning with the twenty-two letters of the Hebrew alphabet, we access three levels of soul consciousness: known in Hebrew as nefesh, ruach, and neshamah. The reader/Seeker works through meditations and mantras. The ten sefirot cards represent energy centers, presenting the Tree of Life as an experiential introduction to Kabbalah.

The cards and the two hundred and thirty-three page companion book are purchased separately, although I am reviewing them together. In her introduction, Mendel notes that the spiritual journey depicted in the “Syzygy Oracle” offers a pathway and practice for the contemporary seeker who is willing to acknowledge and honor the darkness as the primal and necessary backdrop to light and life. Once we are awakened, we honor the knowledge that life is deeper, richer, and stronger than it appears on the surface.

In using the oracle, Mendel encourages the reader to a personal practice of gaining insight and wisdom from the cards. If the reader/seeker does not own the deck, there is the ability to visit her website, fill out the form, and download a black and white set of illustrations that can be pasted onto index cards.

Another method would be to take blank index cards and number them one through thirty-two. The card backs can be left blank, or decorated in a manner pleasing to the reader/seeker. For the creative reader/seeker, number a deck of plain playing cards, then decorate each card with a collage or series of words that apply to the teaching. The card backs can be left plain, or decorated.

If the reader/seeker is reading from their own deck, it is suggested that they compare the card with the illustration in the book. Read the chapter, and see what themes develop. In this deck, nefesh is accessed through the assigned letter of the Hebrew alphabet, ruach through its number, and neshama through its stories. Each card offers a theme, and a mantra for meditation.

The five major ways that this oracle differs from other Tarot oracles are given as:

The structure of a reading is through letter, number, and story. Nefesh relates to the physical realm, ruach to the perception of pattern that is intrinsic and instinctual, and neshama to the emotional realm.

The Prolog presents a beautiful story about Alef, the Light of Being, sitting with God. “Do not eat the fruit until you are ready for all that lif e has to offer. Are you ready?” Each Tarot card is presented with a full-page black and white scan, a Theme, Mantra, Archetype, Mentor, Essential Oil, and the traditional Tarot card that it is associated with. The card and how it operates is discussed, along with the function of the Archetypal Mentor, the associated pathway on the Tree of Life, a short summary, questions for the reader/seeker to ask themselves, and a meditation.

Each of the ten sefirot are presented with a full-page black and white scan, the name of the pathway, the keyword, what the pillar represents, a discussion of the energy, and a short paragraph on how the reader/seeker can put this energy to use in their life. The image for each of the sefirot is a mandala created from photographs of flowers from Mendel’s own garden, and from her travels. Running along the outside of the mandala are keywords for that specific sefirot.

The cards themselves are 2 ľ” by 4 ľ”, of quality card stock. The backs are bright red, with a center mandala comprised of quite an interesting black and white shadow profiles, with a bright red apple, with a green leaf, sitting between them. The backs are not reversible, as the cards are not meant to be read with reversals.

I love the imagery that is used in these cards. Inverting (The Hanging Man) shows a figure in the traditional head down position. In this card, the figure is located between two trees. The hands are held behind the back, the right leg crossed at the knee behind the left leg. The sun shines fully in the upper right hand corner of the card.

Releasing (Death) shows the white skeleton of a tree on the left hand side of the card, one small green leaf appearing above her. In the middle we see the web of life, a ball comprised of the thread of life, and a small pair of scissors - the Archetype of this card is the Three Fates who spin, measure, and cut the thread of life we live..In the middle of the web we see an etemality of the serpent. Under the web we see a bereft feminine figure, seated, with her head forward, over her knees. In the East are two colorful circles representing the multiple potentials of a new dawn as the sun rises, behind a grid composed of the Hebrew letter "nun" which is associated with this card.

Constricting (The Devil) shows a female figure, blindfolded, standing at the crossroads, in front of a mirrored pillar. The sacred geometric torus spins around her representing her own fears that blind and paralyse her. White light shines down on her from both sides of the card. An owl sits on top of the pillar, and the recurring grid is composed of the Hebrew letter "ayin" (the 16th letter of the Hebrew alphabet) is superimposed over all of the images.

Becoming (The World) shows a female figure, dancing on a spiral of stairs. The night sky is behind her, with the sun and the moon being one. She holds an ankh in her right hand. A white pyramid stand beneath her, with a mandala painted on it. From her heart center a spiral of joy radiates outward. The mandala for the sefirot Harmony is made up of lovely pink flowers. The keywords surrounding it include Harmony Celebrate Diversity, and Sanctify Life, in a continuing pattern.

This deck is meant to be used for spiritual study, for personal empowerment, and for understanding the Sacred Feminine. It can be used for divination, but that is not the intent. I found the book to be well written, and the cards to have great depth through their combination of imagery. Two thumbs up!