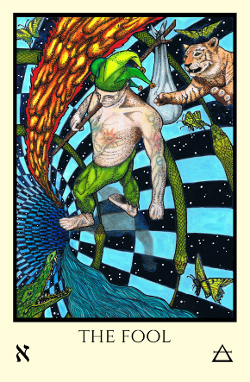 The Tabula Mundi Tarot is Thoth-based in spirit, structure and inspiration, but has vibrant and detailed original artwork by the artist of the Rosetta Tarot. The full 78-card deck is in progress, and a 22-card limited edition is available now in a coloured version (true to Golden Dawn colour scales) and a black and white version. 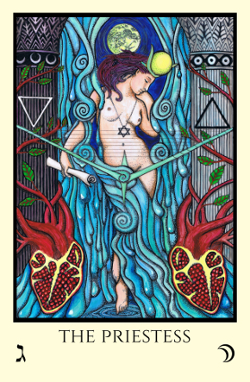 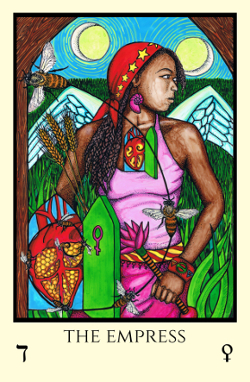 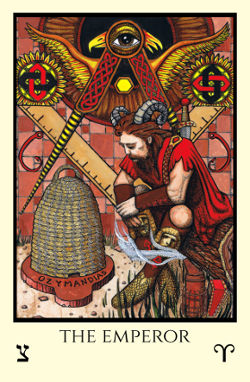 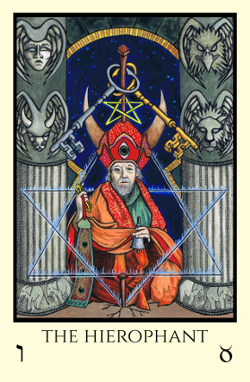 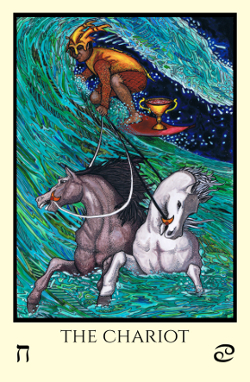 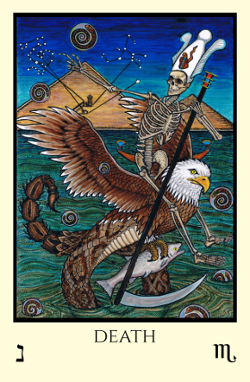 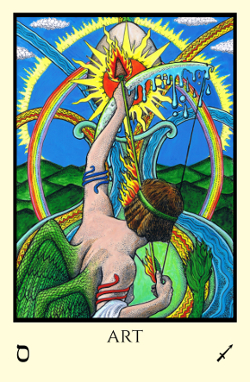 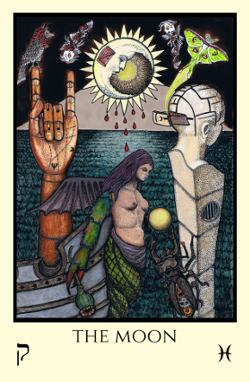 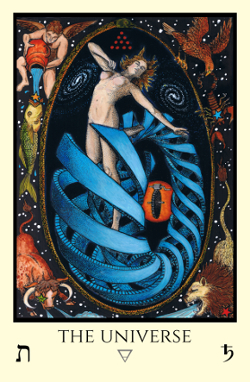 The Tabula Mundi Tarot is a new Tarot deck from M.M. Meleen, creator of the Rosetta Tarot. While that deck was made in four different styles and mediums to symbolize different suits, here the deck is more unified in character. Being based in its ideas on Aleister Crowley's Thoth Tarot, comparisons are inevitable, yet this deck is not a clone of the other. Rather, Meleen has taken the basic ideas of the Thoth deck, associated Thelemic ideas as well as miscellaneous writings by Crowley himself, and has presented them in new and interesting ways, throwing in much of herself in the process. This provides for new ways of dealing with established ideas and seeing them from different angles, while staying true to the source material.

The presentation is superb, and shows real taste and foresight as to use, convenience and aesthetic appeal. Meleen has gone all-out in terms of extras and additional material, something that elevates the deck above its peers. The Special Edition comes in a handsome wooden box with a carving of the card backs on it. It has a slide- open lid, and has a very convenient slit on it for mounting whatever card you happen to be contemplating at the moment. The box also comes with a handy cloth sleeve with which to easily remove cards without having to damage them.

In lieu of a “little white book,” the deck comes with a handsomely hand-bound booklet with a few words about the symbolism and teachings of each card. There are no divinatory meanings per se, but rather a quote pertaining to the card plus a short explanation of its symbolism and content. This is reminiscent of Lady Frieda Harris's original gallery notes for the Thoth deck, and leaves the users to create their own meanings for the cards.

Two extra cards come with the deck. One of them has the traditional Golden Dawn titles for the cards. The other extra card is quite a bit more special. This one shows a diagram of the Tree of Life, and goes with a handy plastic film on which the user can mark down the place on the Tree that they are studying, or use it to study the cards while marking down emphases. Using an erasable marker, the user can write on it and erase at will.

The card stock of the colored edition itself is a very attractive cream color, which helps the colors and design of the cards stand out. The attention to detail in the presentation of cards, as of the entire package, is quite lovely. The astrological and kabbalistic attributions are elegantly displayed in silver foil, which adds a touch of glamor. The card back has a striking design that seems to be inspired by the ideas of Aleister Crowley, and is reversible. The cards are thin, but not flimsy, and are printed on high quality card paper. The cards are lager than normal for a Tarot deck, but any smaller than that and the images would not be done justice. Were this a full deck, shuffling would be a problem, but as a Majors-only presentation piece, the size is perfect.

Although the deck itself is highly influenced by Aleister Crowley's Thoth Tarot, it shows a great many innovations both in the presentation of ideas and of the concepts themselves. Some cards are modernized in their appearance, which makes them more accessible, while others show Meleen's own slant. To put it mildly, the artist knows her esoteric stuff, and quite confidently presents her new visions of old ideas in a fresh way. The images are drawn in a striking style, using pen and ink with bold colors and compositions. The artistic range of the artist is quite evident, with some cards drawn in a more realistic manner than others, and in slightly different styles, but the deck still retains a cohesive, unified feel, so nothing feels out of place.

The images will be familiar to both users of the Thoth deck, as well as for users of the Rider-Waite, as many are interesting hybrids of the two, while others are unique to this deck. The Fool is reminiscent of the Rider-Waite version in that he is stepping off a cliff, but he is accompanied by the animals from the Thoth. The cliff he is stepping off of is actually a black hole, something that exists in neither deck and is Meleen's own development. The Hierophant is more traditional in his presentation, something that actually enhances one's appreciation of the card, as among his meanings is in fact, tradition.

The Star is one of my favorite cards. It stays faithful to the original intent of the Thoth both visually and ideologically while managing to be fresh and exciting. The star-goddess pictured is holding the sun and moon instead of the traditional goblets. She is washing herself with the stars of the heavens while above her shines a seven-pointed star. The meaning remains the same and is accessible to students while at the same time being fresh and exciting. Lots to contemplate here, many avenues for the imagination.

Fortune is among the more arresting cards, depicted as a spinning wheel with threads of fate going hither and thither throughout the image. The wheel's shuttle is in fact a dorje, a symbol of power and authority, a good symbol for a card attributed to Jupiter. The traditional trinity of figures riding the wheel are here shown as a lemur, an owl and a hand-serpent. This is an interesting idea, and shows great thought in revising established ideas.

To me, the most beautiful card in the deck is The Aeon. Radically different from the corresponding card in the Thoth, this card nevertheless manages too convey its ideas breathtakingly well. Depicted is a river of flame, with the alchemical crucible in the center of it, bearing the rising son of Horus, heralding the advent of the new Aeon. Here he is depicted as a dragon, whereas in the Thoth he is depicted as a hawk. Stonehenge is in the background while above are the appropriate symbols for Nuit and Hadit. This card is masterfully done, drawing the eye upwards evoking a type of process that is almost like an initiatory experience in itself. The viewer really does go on a journey with this card. I would hang a poster of it on my wall.

Also being released is the same deck in black and white. Users can elect to color these cards themselves, using an included extra card with the Golden Dawn color scales. Being a fan of black and white decks, I feel that leaving them as they are is way to see them from a different angle, while also affording clearer views of some intricate details that are not readily seen in the colored version.

In general, I would not say that this is a deck for beginners, both because of its content and the fact that at present it is released as a Majors-only deck. The accompanying booklet is very well presented, but it will not give beginning Tarot readers much to go on. However, for experienced students of either Thelema or the Thoth Tarot, this is a welcome addition to any collection. I would also recommend it for its art alone, independent of any esoteric significance. In my opinion it is not only a very good deck, it is also an important one, representing the next step and modernization of the promulgation of the Thoth deck and its Thelemic ideas. While there are some cards that I would have portrayed differently, having different ideas about the interpretation of certain symbols, things I would add or subtract, these are nitpicks due to differences of opinion.

I cannot recommend this deck enough.