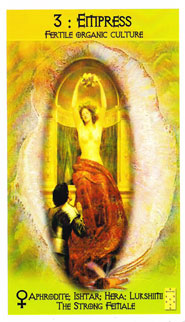 The Talking Tarot is an Australian deck of 78 cards, with imagery that is a mix of photography and computer collage. It's generally based on the Rider-Waite, but has unillustrated pip cards and Swords are linked with Fire and Wands with Air.


Card Images from the The Talking Tarot 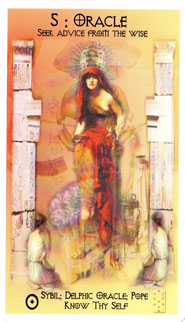 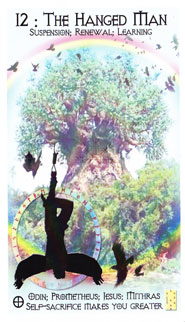 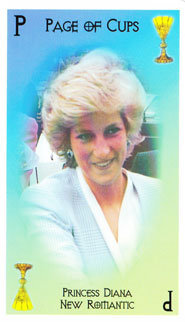 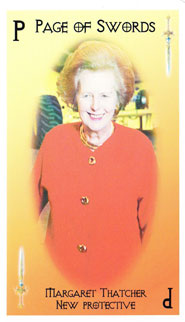 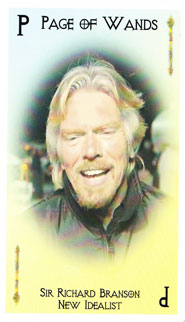 I recently worked at the Mind-Body-Spirit festival in Sydney, and while I was there working on a completely separate stall, I received a review copy of this deck from one of the other stallholders. Self-published, it is as far as I know only available through Shé's website, and I think it probably is worthy enough to deserve better circulation than just through one outlet.

Like the Quantum Tarot, it is published in a sturdy, stand-up two-piece box which contains the deck and the accompanying booklet, smaller than a conventional book but far larger and more informative than a conventional LWB. The box measures 85mm x 130mm and the cards 73mm x 124mm, making it the same size inside and out as the Quantum as well as having very similarly set-up packaging. My first impressions, just of the packaging were favourable: this is the first deck I have ever received which didn't involve at least one layer of shrink-wrapping, often two or even in one or two cases, three layers. Hooray! No plastic to add to landfill! Shé gets huge brownie-points for that one. On the other hand, it has to be said that the layered artwork on the outside of the box is already starting to peel off at the edges after only a few weeks.

The outer surfaces of the box have a matt laminate over a slightly darker rendition of "The Star" and a portrait-shot of the creator, but the cards themselves have a high-gloss laminate. I am notorious for not being able to smell the odour of gassing-off laminate on highly laminated decks, so I genuinely do not know if that smell, which bothers some people, is an issue with this deck or not. I asked a couple of people to sniff it for me and it got no reaction, so we can hope for the best, that the laminate used might be an odour-free one.

The back of the cards, too, is well-done: I prefer backs with a horizontal symmetry (ie, the left and right sides are symmetrical) but with no vertical symmetry so that when going through the deck rapidly, you can see at a glance whether cards are upright or reversed from the backs. This card-back is appropriate: the bottom-half backgrounded in a gentle puce and the top half in a green fading into each other, the design shows a Sword entering a Cup (reminiscent of Wiccan ritual) over crossed Wands, on a background of a large Coin. The colour-range throughout tends to favour pastels, especially in the Minors, so in cards where stronger colours are used it seems to draw attention to those cards and make a point about them. What that point actually is, is up to each observer.

The deck bills itself as a Marseilles-style deck, but in no way do I find it to have a Marseilles flavour. My impressions are that it is very much a Rider-Waite style of deck, though with unillustrated pips. Referred to in the book as a deck that Shé developed out of her teaching requirements, it has key words and key phrases on each of the cards, Major and Minor, and they follow traditional RW meanings very closely, as do the longer discussions in the book. Anyone who has a taste for Marseilles-style artwork in older or modern decks who is looking to add to their collection of Marseilles-influenced art, will be disappointed by this deck, but this is not to suggest that it is a worthless deck overall.

The book, although stiff-spined and awkward to open (which may imply a problem with longevity - I suspect its spine will split with use), is lucid and clear, and very helpful for the novice. As I mentioned earlier each of the cards have key-words and phrases, and sometimes a question, printed on them, meaning that a novice will not always have to refer back to the book when they are stumped during a reading. I am not entirely happy with the font that she has chosen, though - while having the "squared circle" as the O throughout has definite mystical connotations that I appreciate, it slows down the eye when reading, and I find the particular M used, with a little tag on top of it, breaks the flow of words even more, making some words close-to-illegible. With time I am becoming used to it, but it was a noticeable problem in the beginning.

The images themselves are computer-generated and involve some photographic work. Shé has reversed the elemental correspondences for the suits of Swords and Wands, making Wands Air and Swords Fire, presumably because trees reach into the Air and breathe Air, and because Swords are forged in Fire. Coins are on a brown/green ground, and have a blue disc worked over with yellow Celtic knotwork. Cups are on a blue/green ground, and have elongated, highly decorated champagne flutes. Wands (Air) are on a yellow/blue ground and have highly decorated scepters. And Swords (Fire) are on an orange/yellow ground and have Swords with encrusted decorations not only on the handles and hilts but on parts of the blades as well. The single nod to Marseilles tradition is the interlocked nature of Swords and Wands in larger-numbered cards. There is a spelling mistake on the Two Coins, which I find jarring every time I see it: I understand the deck was self-published and there probably was no one else to proof-read it, but if Tarot is to be regarded as a kind of authority-function in life, then designers could go that one step to get spelling right, at least on the faces of the cards.

The four Pages deserve special mention: they have been singled out in the book as well, and are photographs of well-known modern icons: Margaret Thatcher for the Page Swords, Richard Branson for the Page Wands, Princess Diana for the Page Cups and Bill Gates for the Page Coins. I find them gently humorous and ironic, for the most part. I am very uncertain, though, whether permission for any of the images has been asked for - I really don't know if the Royal Family would have granted permission for that image to have been used.

Some cards don't work so well for me: the Emperor's colour lets it down for me, and there is something less than ideal about Temperance, the Devil and the Tower. I also have to wonder what the patches of bleached skin in the two characters in The Sun are about - sunburn and peeling, maybe?

On the other hand, there were quite a number of cards that did work well for me, my favourites being the Magickian, the Empress which I find overwhelmingly sexual, the Oracle, the Hermit, a Hanged Man with a simply stunning background, and a particularly interesting and thoughtful Death.

This deck was designed for beginners, and although I have not taught with it, I feel it could be a useful and helpful deck for people just starting on their Tarot journey. It is also not intimidating or challenging at all, and so will serve more experienced readers well especially with clients who may respond badly to more confrontational decks. Also, collectors of decks with unillustrated pips will want to acquire this deck as an example of a modern teaching-deck with unillustrated pips.

There is one thing I do feel compelled to mention. Not only does the website above show only the boxed deck and no artwork so any prospective buyers have to buy it sight-unseen with no idea whether it really suits their taste or not, but I had a communication issue with her. My copy of the deck was specifically a review-copy, which means I get to write my impressions, and the better a write-up I give it, the more likely people are to buy it. But I have been trying to contact her via her website and her email for weeks regarding an issue to do with the deck, and she has been completely unresponsive. If this is how she treats people who have the potential to generate a lot of business for her, one wonders how she is going to treat individual one-off customers who might have after-sales issues.

Still, collectors of self-published decks are going to want it, and it has undoubted potential as a teaching deck, so people inclined towards modern artwork who are still finding their feet in Tarot may very well enjoy this deck very much.