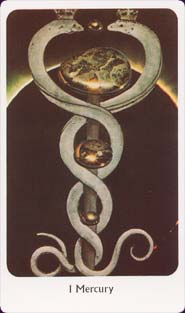 The Tantric Dakini Oracle is a set of 65 cards with collages of surrealistic images, based on teaching of the Eastern Tantric tradition. The cards were formerly published as the Secret Dakini Oracle. 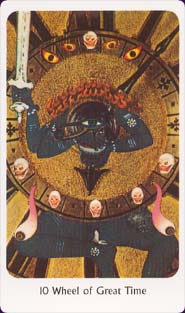 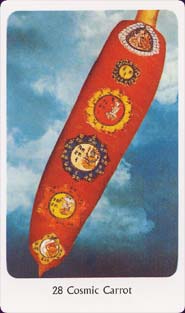 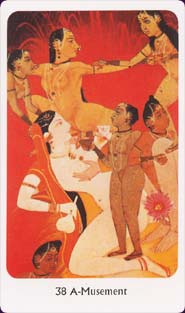 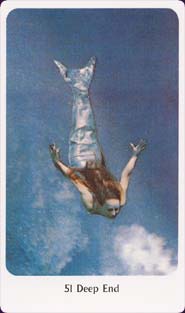 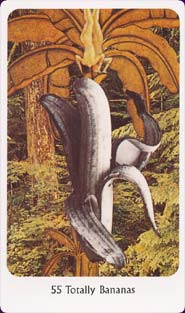 
The Tantric Dakini Oracle is meant to be used not only as a tool of divination, but as a powerful tool for personal transformation. The concept of dakini is that of feminine wisdom-energy, represented in the yoga and tantra mysteries. There are traditionally 64 dakinis, representing archetypal energies, to be found within each person. Their energies can be creative, or they can be destructive - however they manifest, they are the energies that run our lives.

The Tantric Dakini Oracle is done in collage style, blending together the symbols that mirror our subtle energies - the ancient wisdom and memories that works to act as a bridge between our conscious and unconscious selves. Although both systems reflect archetypal energies, my personal feeling is that the correlation seems somewhat forced, and that the authors would have been better off presenting this oracle as a "stand alone".

The cards themselves are 3" by 5" - just hitting that gray area of "hard to use" for smaller hands. They are good quality, non-coated, non-glossy cardstock, and will need to have great care taken of them or they will not hold up over extensive use. The backs have a 1/4" white border, framing a "night sky - universe" type scene. The face of the card also carries the 1/4" white border, with the name and number of the card across the bottom. There is no color scheme or any other manner in which the alleged suits in this deck can be detected. The definitions for the cards will need to be memorized - and some definitions will change depending on the position within the spreads given in the book.

The presentation in the book is a black/white scan of the card, followed by a discussion of the symbols in the card and the divinatory meaning. There are no reversed meanings given. From the book:

Mercury bears the number "1", signifying the truth of unity and invoking the concepts of masculinity as an active function related to the creative intellect.

Two serpents are shown entwined around a central staff, a wand of Mercury, the whole forming the mystic caduceus, the symbol of magickal transformation. The snakes wind around the staff three and one-half times, likening them to the coiled kundalini serpent-energy emanating from the Base or actual center. The staff symbolizes the spinal column, through which the raw serpent-energy travels and is transformed. The aim of awakening the kundalini-energy is to pass the mist potent inner forces upward, piercing and illuminating the inner psychic centers (the chakras), resulting in drops of wisdom distilled in the region of the Head, the seat of the Higher Intellect. This card represents the primordial energy (the inner shakti) transformed alchenically into an elixir, depicted as fluid mercury harnessed as four stable pools. These are related to the main psychic centers of the subtle body, at the Navel, Heart, Throat and Head regions.

This is a symbol of the realization and fulfillment stage of tantric practice, as is suggested by the crowns on the heads of the snakes. The background reveals itself as a black sun, indicating the mystery of energy transformed into something beyond our worldly concepts. Mercury in its raw stage is a poison, but if used correctly it can produce gold. This alchemical concept here takes on a psychological meaning: the gold of spirituality and enlightenment.

Spiritual fulfillment, enlightenment, distillation, sudden moments of deep realization. The creative intellect exalted. Indicating that all experiences (both positive and negative) should be known and experienced within the subtle body of transformation. Self-control, utilized to achieve ultimate perfection and spiritual goals. The transforming power of the Will, the intentional act. In the Spleen center this indicates a possible danger to health. Otherwise it is very positive. Meditate on the form of the subtle or transformation body.

Other cards that, for me, had powerful symbolic meanings were 39 Serpent Power, with its intense lightening bolt of energy; 33 Eternal Life, with the symbol of the Ankh and the Egyptian God Amen; 21 Earthbound, with the planet earth as viewed from space; 11 Self-Created, with its soothing Lotus flower; and 5 Ganesh: Lord of Obstacles, showing the Lord seated in the center of a spider's web.

The interesting part of this oracle comes in the instructions for doing readings. Again, the Tarot is brought in through the presentation of the traditional Celtic Cross spread. Two further spreads are presented - with the recommendation that the same cards be carried from the Celtic Cross spread to the Tree Of Life Chart, as the spreads build on each other. The Tree Of Life Chart relates the cards to the Chakra system, and is good for use as a meditative tool as well as for a reading. The final spread, titled the Method of Great Universe Map, is a 13 card spread that follows an astrological theme.

The set-up before the reading is unique in itself. It is recommended that the cards be ordered (placed in numerological order) before each reading so that all readings start "from the same place". The cards are shuffled by the person being read for, then cut into three piles using the left hand. The cards are placed back into one pile, then cut into three piles twice more, bringing the cards back into one pile between each cut.

Another "added value" concept is the use of numbers in the reading - or rather, at the end of the reading. the numbers for all of the cards are added together until they are 21 or less. The resulting number then represents the tone for the entire reading. I plan to use this in future readings - just to see how it works out! Another thought here would be to use the higher number as well as its lower value - i.e. if the cards added up to 21, cards 21 and 3 (2+1) would hold the energy of the reading.

While I disagreed with the seemingly forced comparison with Tarot, I enjoyed using this deck, and felt that it was of value. I would not recommend it as a primary reading deck, but it does have its place in both personal and client readings, and would work well in a comparative reading.

Tantra is a mystical system for transformation and expanding consciousness, based on ancient Hindu and Buddhist texts, while a dakini is an archetype of feminine wisdom, and an important concept in Yoga and Tantra mysteries. In the Tantric Dakini Oracle, the 64 traditional dakini energies have been interpreted through collage artwork into an oracle set for divination, meditation, the enhancement of psychic faculties and self-transformation.

The card artwork of the Tantric Dakini Oracle is a collage of images from different sources, creating surrealistic pictures intended to evoke memories, sentiments, desires or fears. Many of the elements used in the collages are of the natural world – galaxies, stars, mountains, deserts, tidal waves, people, and on the whole, the artwork is not as polished as later decks. The image elements vary in quality and resolution, occasionally having the appearance of cut-out magazine pictures.

The Tantric Dakini Oracle set, as published by Destiny Books, contains 65 cards and a 224-page book in a very strong, red cardboard slipcase. The book is printed on thick, white paper, but unfortunately the cards themselves are a little rough. They vary slightly in height, and the corners are not quite rounded. (In my set, the bottom card also had not been cut all the way through, and still had the corner pieces attached.)

This deck is described by the author as "a tarot based on the mystical teachings of the Tantric tradition". The companion book also makes mention of the Oracle’s connection with Tarot; how it wasn’t intentionally developed using Tarot’s structure but ended up being related. Personally, I don’t think it has a strong relationship with the Tarot; there are indeed High Priestess, Wheel, and Death cards among the first 22 cards, but they have very few links in symbolism. Forty cards are connected with the four elements, and make up suits of a kind, and there are three ‘time’ cards standing for past, present and future which have no Tarot equivalent.

The companion book offers several spreads – Celtic Cross, Tree of Life, and Great Universe Map - and sample readings along with the card meanings. A handy list of brief meanings, printed sideways so the information of title, meaning and tarot relationship fit all on one line, are also given. The card meanings which make up most of the book display a large card image, the number and title of the card, an explanation of the symbols, and the divinatory meanings with reference to positions in the Tree of Life Spread.

The Tantric Dakini Oracle set has a solid background in Tantric research, and may be of interest to students of Eastern traditions or collectors who enjoy collage-style divination decks.