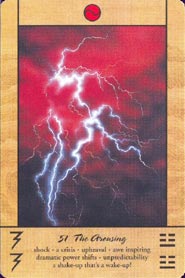 The Tao Oracle is a visual approach to the I Ching, in 64 cards. The cards are lovely, as you'd expect from Ma Dava Padma, who also created the Osho Zen Tarot.


Card Images from the TAO Oracle 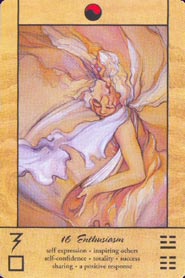 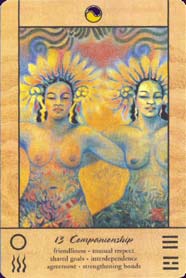 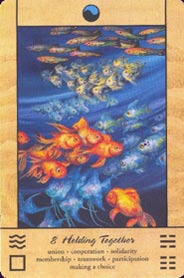 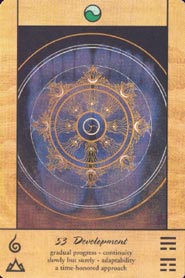 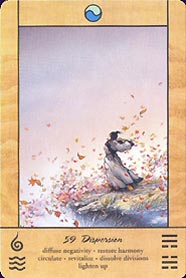 The Tao Oracle is a 64-card oracle deck based on the Chinese I Ching system. It is published by St. Martin's Press as a deck and book combination set. The cards are 3 1/2" x 5 1/4", on study laminated cardstock. (The thickness of the cards gives them durability, but makes them slightly hard to shuffle.)

The cards are illustrated with beautiful paintings by Ma Deva Padma, whose wonderful artwork is also seen in her Osho Zen Tarot. The backs feature a red background superimposed with a pattern of 48 I Ching hexagrams, and overlaid by a complex symbolic representation of the interaction of the Yin and Yang energies with the eight I Ching trigrams and the eight directions of the compass. The backs are not reversible, but that's not really relevant for use of this deck for I Ching readings.

Each of the card's front surfaces features a colorful painting, several keywords, the traditional Chinese depiction of the hexagram using six broken and/or unbroken lines, and two more symbolic representations of Padma’s own devising. One of these is a combination of two graphic symbols (with one representing each of the eight trigrams); the other is a variation of the Taijitu (the Yin/Yang diagram) featuring two colors (with one color assigned to each of the eight trigrams). The color-coded diagrams make it relatively easy to find a particular card.

When I first learned of this deck, I hesitated to buy it, out of concern that inaccurate depictions of the I Ching might negatively affect my intuitive understanding of the hexagrams’ meanings. Those fears turned out to be unfounded, as Padma's paintings present the meanings of the hexagrams in very sensitive and relevant ways. The first two cards serve as good examples: Hexagram 1 The Creative (the full expression of the active, masculine Yang principle) shows an outline of a handprint filled with stars, surrounded by concentric colored circles and subtle designs, which include flowers, eyes, and fish. Hexagram 2 The Receptive (the full expression of the nurturing, feminine Yin principle) depicts the torso of a fertility goddess, superimposed with a delicate filigree including flowers, birds, mountains, and waves.

The accompanying 318-page book by Padma gives a brief overview of the I Ching system, a detailed discussion of each of the 64 cards, and several spreads and ways of working with the cards. I have found two ways of using the cards to be most useful. One way is to draw one card (for the day, or for a situation), and meditate on the imagery of that card to get insights into the current situation. The other approach I have found useful is to first cast the I Ching using the traditional methods of either three coins or 50 sticks (these methods are not described in Padma's book, but can be found in most I Ching books). Then determine the current and outcome hexagrams based on the coin throws or stick divisions. Once the hexagrams have been determined, pull the two corresponding cards out of the deck to use for meditation and for accessing one's intuition by focusing on the images.

Although this is not a Tarot deck, it would be a great addition for anyone with an interest in exploring the I Ching system – an exploration which would be enhanced through meditation on Padma's beautiful artwork.