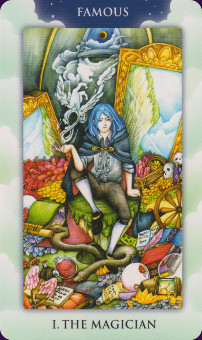 Tarot Card Misty is a sweet, major arcana only deck published in Korea. The cards have manga-style art created in a busy, colourful and detailed style. Each card has an English title and keyword, though the companion book is only published in Korean. 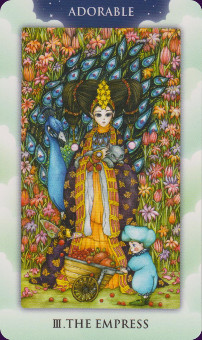 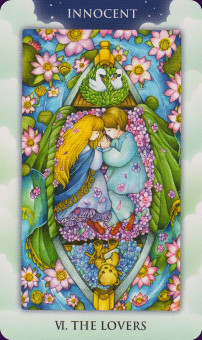 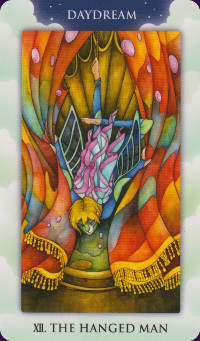 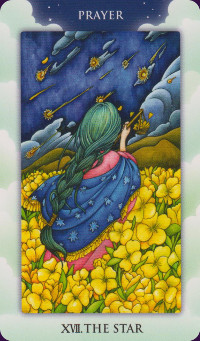 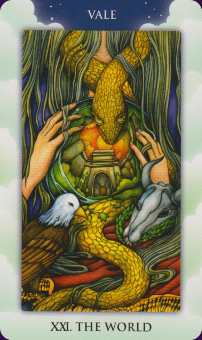 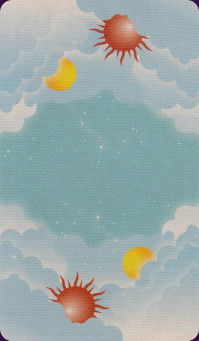 Tarot Card Misty is cute, sweet… and a little bit strange. The deck focuses primarily on people, rather than abstract symbols, involved in esoteric doings. The images themselves have a strong foundation in manga-style art – beings with elfin faces, big eyes, willowy bodies - in primarily Asian settings. It is too bad that the accompanying instruction book is written in Korean, because I would dearly like to know the meanings and/or intent of some of the symbols and details. What is in the pile of occult rubble The Magician perches on; is The Emperor wearing a mask or is he deformed; is The Devil really carrying a severed head; why is Death accompanied by Alice’s White Rabbit; is a cloaked person really twisting an Angels head off in Judgement?

Each card has a keyword, if you can call them that, above the image. Something somewhere has been lost in translation, or gone peculiarly awry. While some of the keywords imake sense in a direct, or even circuitous, way – others are just bizarre. It is worth repeating all of them here, because the collective impact is lost in giving only one or two examples.

This is a standard Major Arcana in that it has 22 cards with no renames; and adheres to the Rider Waite Smith standard ordering. The cards of measure 65 x 110 mm, which makes them fairly much the same size as an average deck of playing cards. The card stock is fairly light, well finished, flexible, and quite glossy. Being the same size as playing cards they fit well into the hands, and shuffle easily. This deck will not withstand repeated heavy handling or poor storage methods, as it is a little flimsy.

The print quality is very good – with beautiful colours, clearly delineated; no colour bleeds or blurring. The artwork, as mentioned before, is manga influenced – however it is not a distinctly cartoonish style. The artist demonstrates a dab hand with pen and ink, or perhaps watercolour style. The colours are soft and subtle, a little bit of a candy coloured palette as opposed to jarring blocks of bright, unmodified colour.

Each card has a border of clouds, with a starry night sky topping the images. The "keywords" are printed at the top of the card in white; the number and title of the card is at the bottom, in black. The image on the back, a starry, cloudy sky in pale blue with suns and moons – is fully reversible.

The cards are part of a book and card set. They come packaged in cellophane, and framed in soft black plastic foam to protect them. This is kept in one side of a plastic folio, the other side houses the guidebook. The guide book itself is written in Korean, so regrettably I am unable to assess the quality of the information given. However the book is 125 pages long and includes a background story, information about Tarot Card Misty, full-colour reproductions of each card, and a question and answer chapter for each card.

Tarot Card Misty is an unusual Major Arcana with lots of teen appeal, and is quite a lot of fun. It is an ideal collectors edition – having a rather unique character. And if you are a fan of Asian pop art, or love manga you will undoubtedly want this deck.