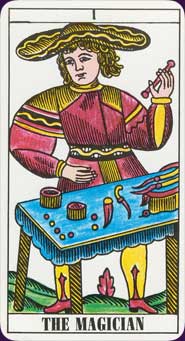 The Tarot Classic is a full-colour reproduction of the 18th century woodcuts by Claude Burdel, republished by US Games in 1974. The art is in a Marseilles style, but is not the same as the Conver style.


Card Images from the Tarot Classic 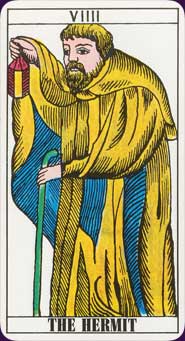 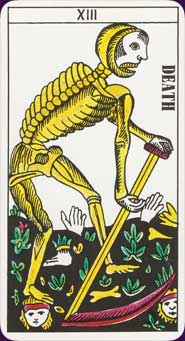 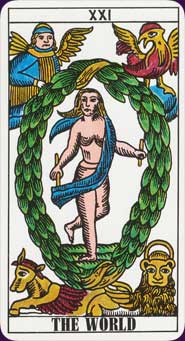 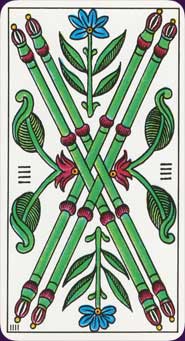 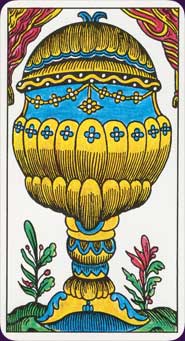 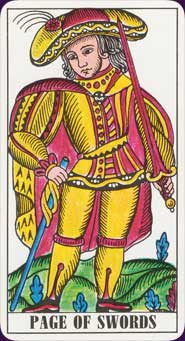 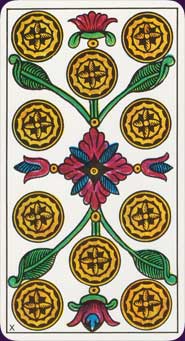 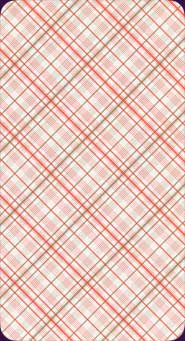 The Tarot Classic is a standard 78 card Marseille-style deck with medieval imagery, Justice as card 8, Strength as 11 and non-scenic pip cards. The deck was first published in the early 1970s, and like the 1JJ Swiss Tarot, was one of the most widely available decks at the time. There is a companion book for this deck, authored by Stuart Kaplan.

Although the deck follows the Marseille designs, it does however use the rather anachronistic Rider-Waite titles (The High Priestess, The Hierophant, Wands and Pentacles). The Death card (which is usually left untitled in the Marseille) has been named, but with the title running along the side of the card. The Page of Pentacles has also been titled in this fashion. The Fool is unnumbered and all titles are in English, rather than the usual French or Italian used in Marseille decks.

Some of the images differ from the ‘traditional’ Marseille style, notably The Hanged Man (who is portrayed with both legs tied-up). There is a wider colour palette, and the suits are vaguely differentiated by colour (Wands are green, Swords are red, Cups and Pentacles are both yellow and blue).

The cards themselves are smaller than usual, measuring approximately 11cm by 6cm with a simple red and gold tarotee back design. I personally love this smaller size. It makes the deck very easy to shuffle and gives it a simple, non-pretentious air that I find very refreshing. The cards are lightly coated and feel ‘silky’ (though the deck does seem to get more grubby than most).

The deck has been coloured in a rather slapstick way. The colouring looks very rough in places, almost as if it were done by a child (many of the colours look like they were done in crayons). The figures have a rather unpleasant pink skin, and some of the colour choices are pretty weird (note the pink Tower!). When using this deck, I often veer from either hating the rough style to thinking it looks quaint and childlike.

One of the things that attracted me to this deck was it’s early 1970s pagan/hippy feel (note the Pan-like devil and his acolytes). Yes it’s a medieval-styled deck, but the colouring and font look very 70s to me – you can just imagine this deck popping up in a cult 70s film like ‘The Whicker Man’. The Rider-Waite titling actually adds to this effect, as if it’s trying to appear mysterious and attractive to occult-lovers (the deck does market itself as a fortune-telling tool, so perhaps the titling reflects this intention).

To sum up, it’s taken me a while but I’ve grown very attached to this deck. It’s a more modern alternative to the other Marseille decks available, and it’s wider colour palette gives it more character and variety. It probably wont appeal to Marseille fans (with it’s anachronistic titles), nor to those who like more sophisticated artwork (or scenic minors). However it’s simple, honest feel and lack of pretention may be just the thing you need every now and then.

Additional note: The deck is supposedly based upon original 18th century woodcuts by Claude Burdel. There is some confusion on this however, as the Italian tarot publishers Lo Scarabeo also publish a Burdel deck (the ‘Tarot of Marseilles’ and ‘Universal Tarot of Marseilles’) which clearly differs from the designs in the Tarot Classic. Research by Aeclectic forum members suggest that the Classic is in fact a reproduction (and re-colourisation) of an early 20th century ‘Schaffhouse’ deck.