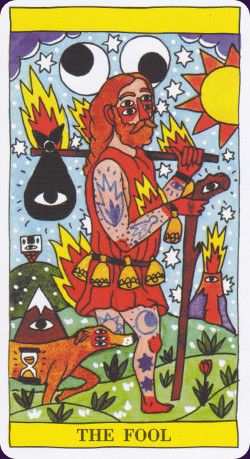 The Tarot del Fuego is a dynamic, individualistic tarot roughly based on the Marseilles pattern from Spanish artist, Ricardo Cavolo. His art on the 78 cards is a mixture of naive, pop-art and tattoo artist. 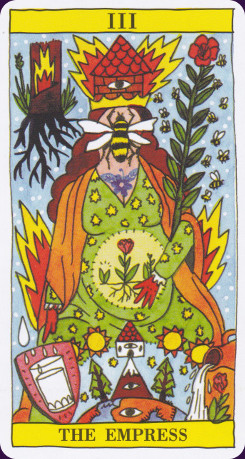 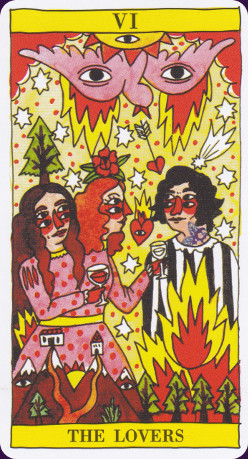 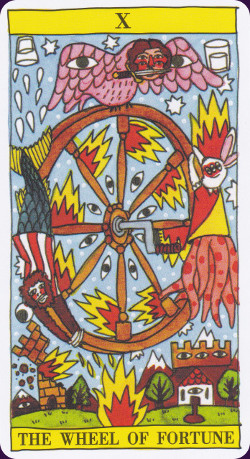 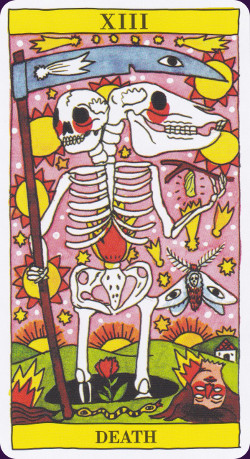 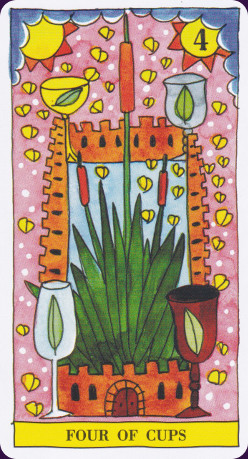 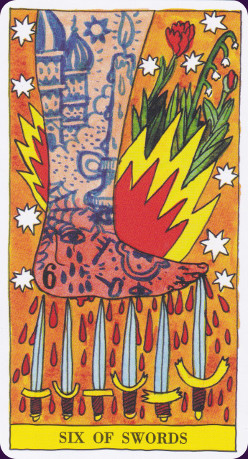 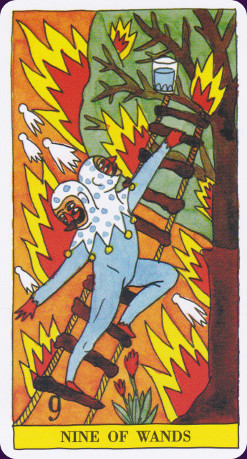 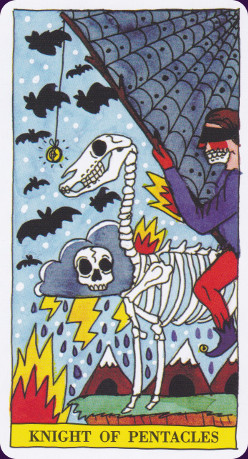 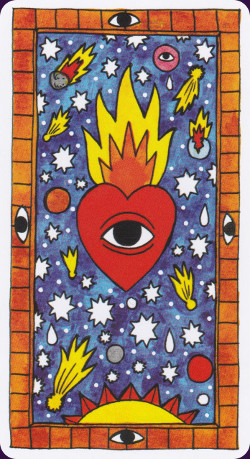 Ricardo Cavolo is a prolific Spanish artist whose works have graced album covers, murals, posters, book covers, and clothing. With the Tarot Del Fuego, Cavolo has created a vibrant and energetic deck.

While the deck is based on the Marseille tarot - and this is easily recognisable in the Major Arcana, the Minor Arcana owes more to the original concepts and imagination of the artist than the repetitive pip cards of the Tarot de Marseille. Many of these colourful images are self-explanatory such as the Ace of Cups – milk sprays from a breast into the cup, or the Three of Swords – three daggers plunged into a blindfolded, heart-shaped apple. Other cards are more obscure in their symbolism such as the Nine of Pentacles – a large open wound in a body reveals flaming coins dotted about the internal organs, while flames burst from smaller wounds; or the Nine of Swords – a many eyed wolf/dragon/serpent slavers over a blindfolded hedgehog with blazing quills, and blades projecting from its spine, while rain falls from dark clouds and lightning flickers. These are very busy images.

This is a 78 card deck, with 22 major Arcana and 56 Minor Arcana. There have been no changes of name in the Major Arcana and the ordering follows A E Waite’s standard. The minor suits are Pentacles, Cups, Swords, and Wands. Each suit is dominated by one colour – Pentacles are primarily blue, Cups have a background of fairy-floss pink, and both Swords and Wands have a strong orange background. This seems to be more the artist's personal symbolism than actual elemental references. All cards have both numbers and titles.

The cards measure 60 x 110 mm – a little smaller (but not by much) than standard decks, they fit nicely into the hands. A very high quality card stock has been used, the cards are reasonably flexible, thin but sturdy, very smooth, and with a low gloss finish. The cards shuffle extremely well, they do not stick or clump together, nor are they so slippery that they slide out of the user's hands. The print quality is excellent – clean, crisp lines and vibrant colours, with no misprints, no blurring, no colour bleeds.

The artwork is unique – a combination of naive and pop art with a good dose of traditional-tattoo flash thrown in for good measure. Ricardo Cavolo favours a palette of strong primary colours, with clear black outlines, and no subtle blending or gentle gradations… Very much reminiscent of comics and graphic novels. This style creates an atmosphere which is quite outgoing and almost tropical, and recalls the artwork employed by Frida Kahlo in her personal diary. There are recurring symbols, for which we have no explanation, which may be part of the artists personal iconography – skulls, flames, lightning, tattoos, and eyes… People, animals, mythical creatures and inanimate objects all have a multitude of unblinking, all-seeing eyes.

The cards have a narrow white border around the images, and titles and numbers are given in a yellow strip at the top and bottom of the artwork. The image on the back of the cards – a flaming heart with a staring eye, on a background of starry skies – is not reversible. The cards come packaged in a lightweight cardboard box. It is compact and can be easily slipped into a bag or backpack, however the box will not withstand rough handling without sustaining damage.

The Little White Book is the standard non-specific fare from Fournier, which is trotted out with each deck. The instructions come in five languages – Spanish, English, French, German, and Portuguese. There is a short, perfunctory potted history of the tarot. The divinatory meanings are given for both upright and reversed cards, and some poor translations aside, they are quite traditional and appear to have been culled verbatim from Eden Gray’s classic The Tarot Revealed. There is no information about the artwork, the significance of recurring symbols, or the narrative behind the many non-traditional images. There is instruction on how to read a Celtic Cross spread, which is basic but adequate for a beginner.

If you are looking for a highly individualistic and modern deck start with the Tarot Del Fuego. It is dynamic, energetic, challenging and potent. It is also highly engaging. If you are an unconventional reader looking for a funky deck – this is it! Due to a complete lack of traditional symbolism the Tarot Del Fuego is not recommended for beginners.