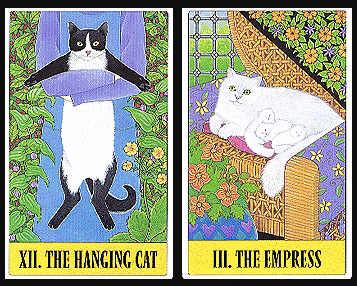 The Tarot for Cats shows cats instead of humans to illustrate the cards, of which there is only the major arcana. The Hanging Cat is a particular favourite of mine... I could just about frame these cards.


Card Images from the Tarot for Cats 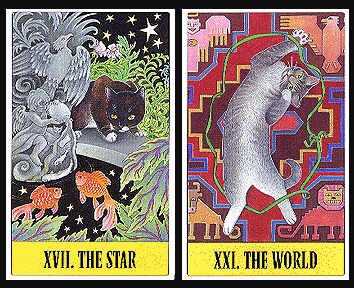 Tarot for Cats Review by Sophie-David

The Tarot for Cats set consists of a small book and the 22 Major Arcana. The cards present bright realistic scenes from the lives of domestic cats. These Majors were reproduced from Kipling West's original paintings in a generously sized format with a low gloss finish. Kipling worked in a judicious amount of basic and often humorous symbolism, and a significant part of the appeal is that the cats are always depicted doing things that cats quite naturally do. The graphics are simple, bold and clear, with original themes that stay well within the spirit of each archetype.

Each card is labeled at the bottom with bold black capitals on a yellow background. The cards use Roman numerals, with Strength at VIII and Justice at XI. Standard names are used, except that The Hanged Man has become The Hanging Cat. As you will see in the sample picture, The Hanging Cat graphic is not at all abusive, but one of the most delightful scenes in the deck. The card backs feature a dark blue on light blue graphic of two cats surrounded by flowery scrollwork, and are fully reversible. Kipling's artwork will be familiar to the many people who already own the Halloween Tarot which incidentally features a black cat on every card.

The 68 page book, written by Regen Dennis and illustrated by Kipling West, is a refreshingly buoyant look at the Tarot through the eyes of cats. This small hardcover book is printed in full colour on glossy paper, which does justice to the wonderful illustrations from the cards themselves. After a three page introduction, the bulk of the book is devoted to the Major Arcana, presenting each in two facing pages. Finally, the last 21 pages contain four sample readings, each with its own spread. While I have used this deck only in readings for myself and other people, it actually could be used to do readings for cats as the author suggests.

Although the reading section is interesting and witty, for me the highlights of the book are in its Major Arcana pages. For each Major, the title and colour picture of the card is followed by a short descriptive sentence in bold. There are then some humorous scenarios illustrating the descriptive sentence. Following this there is a paragraph on the symbolism of the card, which is interesting since it always mentions the breed of cat being illustrated. Then there is a section of divinatory meanings with light-hearted feline advice, and the presentation concludes with a paragraph on the Major when used as a key card. While some of the stories and meanings may not quite mesh with one's own personal interpretations, it is best take them in the fun tongue-in-cheek spirit in which they were intended. Here is a particularly evocative example from The Star: "The future holds great promise. The approaching winter portends another glorious season of warm air coming up through heat vents."

Although out of print for some years now, Tarot for Cats can be purchased from the used market fairly readily. The Tarot for Cats set comes in a 5-1/2" x 8-1/2" cardboard sleeve containing a 5" x 5-1/2" book and a box of 3-1/4" x 5-1/4" cards. Be sure to buy the complete kit which includes both the deck and the book - there seem to be many more of the books available by themselves than in a set with the cards. You would be missing a lot of the fun if you had the one without the other. As a buying guide, note that the kit originally retailed for US $14.95, or Cdn $19.95. I think I paid about US $25 for mine, plus shipping to Canada, and the set arrived in perfect condition.

I believe that the delightful Tarot for Cats set would appeal to anyone with a fondness for cats. Unlike the steep learning curve encountered in some theme decks, I do feel that Tarot for Cats has a fun, friendly and clear approach that is suitable for beginners. I actually bought it as my second deck, and found it a bit less intimidating to work with when I was learning the Majors. Although I rarely use a Majors Only deck, I have found that Tarot for Cats has been very reliable in readings, and like cats themselves, never shy about expressing the truth as it sees it.


Complete Details of Tarot for Cats


Similar Decks to Tarot for Cats