The Tarot in Wonderland is a fun and fanastical blend of tarot with the dreamscape world from Lewis Carroll's books, Alice's Adventures In Wonderland and Through the Looking Glass. The 78-card deck is accompanied by a wonderfully thorough and equally stunning companion book by Barbara Moore.


Card Images from the Tarot in Wonderland 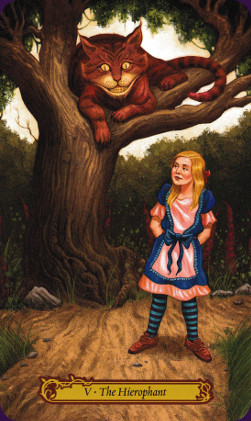 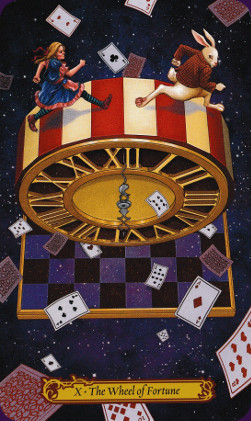 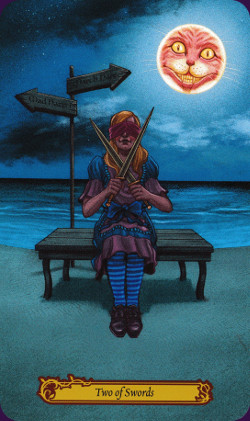 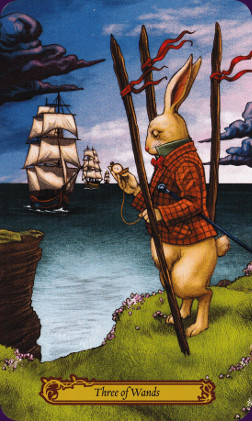 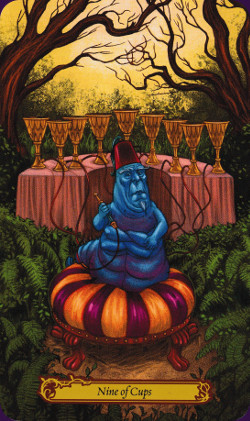 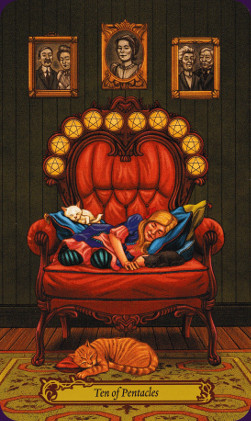 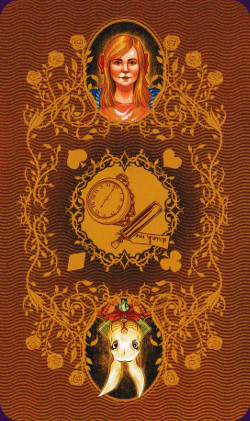 Tarot in Wonderland Review by medusawink

Alice's Adventures In Wonderland, and, Through the Looking Glass by Lewis Carroll (Charles Dodgson) occupies a unique space in our imaginations. In its time it was a dreamscape children's nonsense story on one level, and on another a biting satire aimed at adult readers. Far from being an aimless confection, the Alice stories lampooned Victorian society, social and political figures, popular fads, ideas, literature and beliefs, challenged readers with puzzles, conundrums, and ‘logic’. And, Alice's adventures take place in a world rich in symbolism and archetypes.

Today much of the satire and its subjects have been forgotten, but the story of a little girl travelling through a surreal and shifting landscape peopled by strange and untrustworthy characters lends itself to constant reinterpretation through the lens of current art, including the tarot. There have been many Alice in Wonderland tarot decks and Oracle cards, but not many have examined the subject with as much depth and consideration as Barbara Moore has with this deck.

The Tarot In Wonderland occupies a netherworld where Wonderland collides with the Waite-Smith Tarot, and characters such as the White Rabbit, Mad Hatter, Queen of Hearts, and of course, Alice herself, enact scenes from the RWS classic deck.

This is a standard 78 card, fully illustrated tarot deck, with 22 Major Arcana and 56 Minor Arcana cards. The minor Arcana is divided into four suits – wands, cups, swords, pentacles – with 10 number cards and for court cards. The court cards are Page, Knight, Queen, and King. The Major Arcana cards have both numbers and individual titles, with no significant departures from the established RWS standard.

The cards measure 70 x 118 mm which makes them significantly larger than a typical playing card, but of an average size for a tarot deck.

The card stock is light and flexible with a smooth, glossy finish. The polished finish makes this deck very easy to shuffle, however , if you tend toward being heavy handed with the cards this deck may not be ideal for you. The light quality of the card-stock does mean that accidentally bending the cards while handling them may result in permanent markings or lasting damage. The cards have rounded corners which goes a long way towards preventing the cards becoming dog-eared, or chipping and peeling.

The print quality is excellent, the images are clear and crisp. There are no misprints, colour bleeds, or blurred images. The first editions of the Alice stories were illustrated by Sir John Tenniel; his imaginative artistic interpretations of the stories set a standard that has seldom been bettered, and continues to influence artists today. His influence certainly permeates the art of the Tarot In Wonderland. For this deck, artist Eugene Smith has balanced Tenniel’s influence against his own original interpretations of the text and fitted them into a tarot (specifically RWS) framework. It’s quite a juggling act, and Smith does it successfully. His art recalls the illustrations in children’s books (along the lines of Little Golden Books) with decisive images, strong lines, and bold colours.

This is not a deck of mystery and subtlety, it is not ambiguous and confusing, nor is is meant to be. This deck is designed for novice tarot users, and, in that spirit every symbol, emotion, gesture, significant detail is presented clearly to the viewer. The artist uses a modern commercial style - deft, precise, well polished; and a natural palette of strong colours. The images are borderless and stretch to the edges of the card. All cards have their number and title given in plain black print, in a burgundy and golden-tan, Art Nouveau style frame near the bottom of the image.

The image on the back of the cards is not reversible. At the top of the card sits Alice in an oval frame surrounded by thorns and roses, at the bottom of the card and upside down, is the white rabbit – also in an oval frame. In the centre of the card is a pocket watch and small bottle with the label “drink me”; these items are surrounded by a circle of thorny branches. While Alice and the White Rabbit are depicted in full colour the surrounding decorations are given in tan on a brown background.

The cards and guidebook are part of a box set. The box itself is made from sturdy cardboard with a fold back lid, and magnetised clasp to keep it shut. The cards themselves sit in a cardboard frame in the centre of the box, with the guidebook placed on top. A satin ribbon winds around the cards and under the guidebook is intended to help in removing the items from the box.

The box itself is finished in glossy wrap printed with images from the Tarot in Wonderland as well as a brief description of the deck, and publisher’s details. This is a solid box which will provide very good protection for the book and cards it contains. While it is not quite compact it can still be slipped into a backpack or large shoulder bag and taken on the road.

The guidebook weighs in at 350 glossy, full-colour pages. It is written by tarot expert Barbara Moore and features illustrations by Eugene Smith, and Sir John Tenniel. Barbara Moore generally writes her tarot books for absolute beginners and this guidebook, cleverly titled Wonderland in Tarot, is no exception.

The "Introduction”outlines the concept behind the Tarot in Wonderland – the psychological parallels between Alice's powerfully symbolic adventures and the microcosms contained within tarot decks.

Chapter 1 provides thorough basic instruction on reading the cards, including information about phrasing questions, choosing spreads, laying out the cards, and how to do an overview of the reading. More also addresses the issue of reversed cards, giving four examples that are widely used for interpreting reversed cards. It should be noted here however, war does not include specific reversed meanings for cards in this guidebook.

Chapter 2 is dedicated to "The Major Arcana". Each card has its own sub-chapter, featuring a full colour, full page reproduction of each card. Each chapter is divided into two sections: section 1 is titled Through the Looking Glass and discusses which parts of the stories inspired the card’s image. It includes quotes, discussions of symbols, and often includes reproductions of Sir JohnTenniel’s original illustrations. Section 2 is titled Down the Rabbit Hole, and focuses specifically on the divinatory meetings of the cards. Included in this section is a list of keywords for quick reference and reminders.

Chapter 3 covers the minor Arcana. Again each card is reproduced larger-than-life, and is supported with detailed information from the original texts as well as in-depth divinatory meanings. The Minor Arcana receives equal attention and page space to the Major Arcana, giving the tarot beginner a balanced overview of the entire deck.

Chapter 4 covers an impressive array of spreads. Included are basic one card and three card readings, a "Choices Spread", a Yes/No spread, and some more complicated spreads designed specifically for the Wonderland deck.

Tarot in Wonderland is a fun tarot. it retains an optimistic spirit and successfully conveys that peculiar mixture of innocence, puzzlement, and sense of powerlessness that pervades childhood and makes the world around us seem like a waking Wonderland.

The Waite-Smith symbolism retained in the images makes this deck well-suited for beginners, and tarot adepts will find its familiar patterns easy to master. It is also, on balance, a fairly child friendly deck.

If you are a fan of Wonderland this is a really thorough exploration of Alice's adventures in tarot land. Fans of Barbara Moore’s tarot decks and books will be thrilled by this offering – a well conceived and executed concept full of brilliant ideas for new and experienced tarot readers alike. If you are looking for a deck that is light-hearted, charming, unthreatening then this is an ideal tarot deck.


Complete Details of Tarot in Wonderland


Similar Decks to Tarot in Wonderland