Tarot of the Cat People 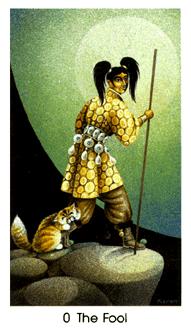 Cats of all varieties, including lions and leopards, accompany the colourful Cat People in this deck for all those cat lovers out there. The artwork in the Tarot of the Cat People is beautifully done.


Card Images from the Tarot of the Cat People 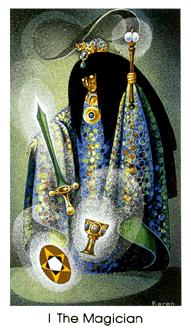 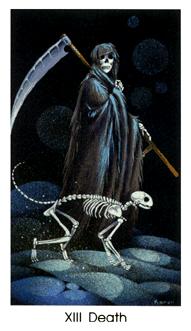 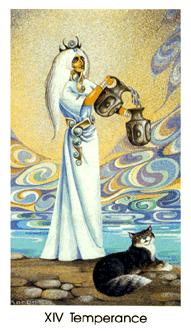 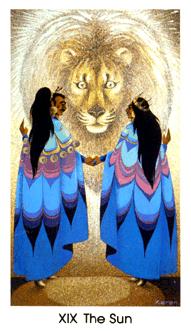 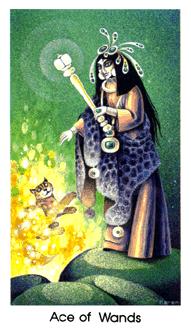 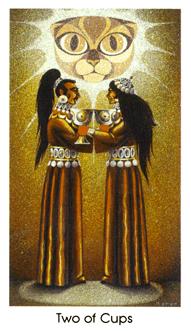 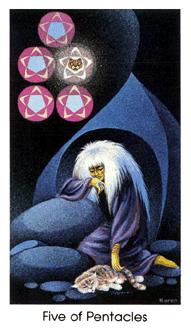 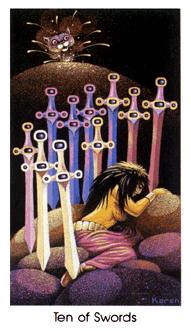 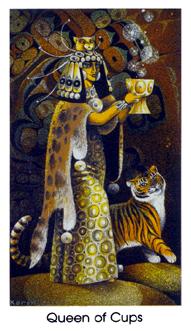 Tarot of the Cat People Review by Chris Norfolk

The Tarot of the Cat People is very much an unusual deck, for several reasons. The deck has at least one cat on every card (as it should!) making it different for a start, but also the style of Kuykendall’s artwork is unique. All the people in the cards have an Asian/Indian look to them, and the clothing is bizarre and in many cases the hair/headdresses (I can’t distinguish between the two on some cards!) is extremely strange, almost as if it came from the 70’s. But when you look at the cards and the whole way the images have been done, it looks quite good. Another interesting thing about the deck is the fantasy type story that accompanies the deck, in which each suit represents a kingdom and its people in some sort of parallel dimension called the Outer Regions, home to the Cat People, a race of humans that love, honour and even obey cats.

Each kingdom gets its name and its people’s name through a combination of the meanings that each suit (all traditional titles, Wands, Cups, Swords and Pentacles) entails and characteristics of the area and people that the cards of that suit depict. The Major Arcana show the people of Vapala, the Diamond Kingdom, whose inhabitants are called the Sky People. Swords show Thnossis, the Ruby Kingdom and home to the Fire People, Wands show Twahihic, the Emerald Kingdom whose inhabitants are called the Sand People, Cups have Azhengir, the Topaz Kingdom and whose people are known as the Salt People, and Kahulawe, the Sapphire Kingdom whose inhabitants are the Rock People have the suit of Pentacles. It is the people and their cats from these kingdoms and their lifestyles that form the basis for the symbolism for the deck.

I like this deck a lot due to the way in which the creator has given the deck an unusual theme of a fantastical world with cats, but has stuck closely to Rider-Waite style symbolism, and the way the cats themselves play a large part in the actual meanings of the cards, as they do in the culture of the humans shown in the cards. They don’t just happen to be there, which is the feeling I gotten from other decks that have used animals or other creatures as a theme for the deck. I particularly like the Knights of this deck; each one depicts a member of the Kingdom involved, riding a big cat native to that part of the Outer Regions instead of a plain old horse. For readings, this deck is a fun alternative to other Waite based decks, with enough symbolism to be useable when reading for others or yourself. There is a fine balance of fun with this deck, as well as seriousness. There are two title changes in the Major Arcana; the Hierophant is the High Priest, and Judgement has become Rejuvenation, but both cards convey the same meanings as before. Strength is number 11 and Justice 8.

This standard-sized 78-card deck is perfectly suitable for beginners; particularly those who like fantasy stories and-or like cats (obviously!), and an experienced reader could also use these cards as well with no difficulty. The cards are good for children as well due to the fact that there is no death very little nudity The thick booklet that comes with the deck is VERY good, providing a brief description on the cards so that the reader can understand what’s going on, and when new to the deck that is sometimes more difficult than you might think, gives detailed divinatory meanings for all cards, even reversed, gives a detailed set of instructions on how to use the ten-card spread, info on the artist and what inspired her to make this deck, and gives a lot of information about the Cat People of the Outer Regions, which again, is important to the reader to figure out what is happening on each card, but anyone who has used a Waite deck will have little trouble with that.

A final word, if you were going to buy this deck, I would definitely recommend getting the deck-and-book set, as while the booklet is very detailed, the actual information that it gives on the cats and the Cat People is very limited, and the book provides even more insight into what goes on in the Outer Regions and what goes on there and in the cards, both with the people, the cats and in geographical terms, as it all adds to the symbolism and the fun of using this deck.


Tarot of the Cat People Review by Sally Ann

Comes in a Deck set with 78 cards and a book that will take you on a journey into a parallel dimension called the Outer regions, the home to the Cat People, a race of humans that love, listen and honor the Cats. Each suit represents a Kingdom and its people who live there. By U.S. Games and printed in Belgium. There are a variety of cats including leopards and lions. The Cat people are Asian/Indian look with elaborate clothing, unusual headdresses and hair styles. The artwork of Kuykendall is outstanding and very unique.

The cards are standard sized on good card stock but slippery and may slide out of the readers hands often, but shuffling may wear the down somewhat and make it easier.. On the back of the card there are cats with a Persian dome motif behind them.

The deck may seen difficult but the book gives a very detailed divinatory meanings for each card. The thick little booklet that comes with the deck is very good. It provides brief description of the cards. There is instructions on how to use the ten card spread and info on the artist. I recommend that you get the Deck set for the book has a story of the Cat People, it takes you in the realms of science fiction and fantasy, in another time and another world. It is more detailed. Teen may be attracted to the gothic type art and anyone that loves cats or interested in the futuristic sci-fi.

If you are familiar with the Marseilles style but want more illustration this is it! It is really a fancy Marseilles type deck in disguise so if you use this deck for readings but you better know your number symbolism. There are a few changes in the Major Arcana of order and naming. The Hierophant is now the High Priest and Judgement has become Rejuvenation but both cards have the same meanings as before. Strength is the number 11 and Justice is number 8. A delightful deck where Cats pull the Chariot, a cat skeleton walks beside the Death card. The Star card is a woman who holds up a cat towards the stars.

Each Kingdom gets a name and its peoples name through a combination of meanings. The Major Arcana show the people of Vapala, who live in the Diamond Kingdom and its inhabitants are called the Sky People.

This deck is suitable for the beginner, or those who like fantasy stories and of course those who love cats. A seasonal reader could use these cards with no difficulty. The deck would also be good for children due to the fact there is no death and very little nudity. It is one for the collectors.


Tarot of the Cat People Review by Abatha Deborah

The Tarot Of The Cat People is a beautiful deck with bold images, detailed patterns and eastern tones. The subtlety in the illustrations captures the nuances of mood and situations.

Facts - It's a traditional deck of 78 cards. Cats are displayed on each card as living animals and appear in the backgrounds as sculptures, architecture, clothing and accessories. The cat images, body language and their expressions portray further details into the message of the card.

Major Arcana - The cards have traditional tarot titles. The XX Judgement title has been changed to Rejuvenation. Each card displays the Roman numeral and the title on the bottom of the card.

Pip Cards - They display illustrated scenes and suit symbols, and each card displays the number and suit on the bottom of the card

Court Cards - The Page, Knight, Queen and King have the title and suit on the bottom of the card.

Suits - Swords / Wands / Cups / Pentacles. They are colour coded within the images.

The Tarot Of The Cat People has a detailed illustrated instruction booklet which explains the 5 Kingdoms within the Outer Regions and gives the description, divinatory meaning and reversed meaning for each card. It also includes a Celtic Cross spread.

Cats are symbolic for mysteries, instinctual knowledge and the shadow aspects of self and situations - this comes through in the cards leading to profound clarity in readings.

The Tarot Of The Cat People is easy to read as it is very expressive. Beginner and advanced readers alike would appreciate this deck.


Complete Details of Tarot of the Cat People


Similar Decks to Tarot of the Cat People