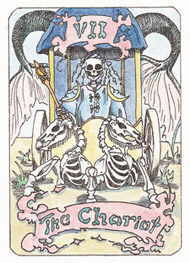 Tarot of the Dead

The Tarot of the Dead is a humourous Tarot deck with scenes featuring empty-eyed skeletons in place of the more usual fully-fleshed human figures. The deck theme was inspired by the Mexican festival, the Day of the Dead. Originally self-published by the author, it's now available in a mass-produced edition from Llewellyn.


Card Images from the Tarot of the Dead 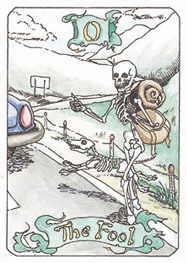 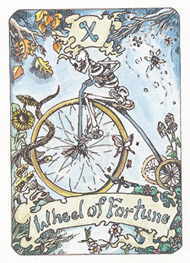 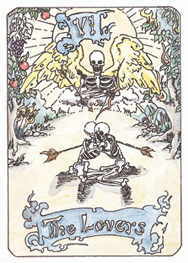 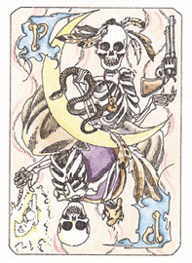 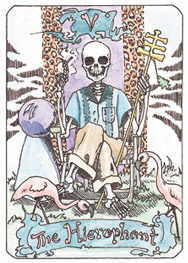 
Tarot of the Dead Review by Bonnie Cehovet

Tarot of the Dead takes a rather unique look at death - through the eyes of the Mexican celebration of the "Day of the Dead", or "Dio de los Muertos". This is a day for honoring family and friends who have passed on. It is a time for remembrance, as well as a time for placing flowers in cemeteries and homes as a sign of respect. Offerings of food, clothing and other things that the person enjoyed in life are placed on tables as a gift to the departed ones. According to the LWB (Little White Book) that comes with this deck, it is also thought that the veil between the worlds is lifted at this time, and that the dead can return to reconnect with family and friends (very similar to how some people view All Hallows Eve/Halloween).

Strange to say about a deck that touts death - but this is an interesting, even amusing work - more than a collectors deck, it is a deck that can be used in many ways - for meditation, ritual and/or ceremony, as well as for readings. The artwork is line drawing, filled in with pastel colors (not the deep, somber black and white one might expect from a deck dealing with death).

The backs of the cards show a background in a multi-colored diamond pattern, with two skulls, done in white, set end to end, so that it cannot be determined if the card is reversed or not. Two single roses are set between the skulls - pointing to the upper right hand and lower left hand corners. There is a 1/4" white border around the edge of the card.

The LWB, as with the cards, is presented in both English and Spanish - not run back to back, but by flipping the LWB over! Upright and inverted meanings are presented for all cards. From the booklet:

...Lights his own way in his quest for knowledge. Introspection. Insight. True spirituality as its own reward. Renewing retreat.

The Fool on his quest is quite an interesting card - both man and dog are seen as skeletons, while the Fool's "wallet" has been turned into a backpack.

The Emperor is a man after my own heart - seated in front of his computer, looking up at the clock on the wall as he speaks on his phone.

The Hanged Man carries a true sense of irony - instead of his hands being behind his back, he is using them to hold his head in place (no vertebrae are seen between the skull and the spine)!

The Ace of Pens is certainly determined to put its passionate visions to paper - in a very fiery fashion!

The Ten of Coffins is interesting in that it carries a problem for me - I have a hard time dealing with decks that are not illustrated. I can read with them, but I am drawing from my own memory banks, and not from the symbolism (or lack t hereof) in the card.

There are a couple of additional cards that I found interesting: the Death card itself and the King of Coffins. The Death card is numbered, but not named. It is also t he only card in the deck that does not portray the figure as a skeleton: for Death we see a pregnant woman seated, wearing a long blue gown and blue shoes. Knighton sees Death as natural change, and the beginning of self-awareness, so perhaps this is the reason for the pregnant state. The King of Coffins is haunting (and humorous) in its message: the upright version shows a male skeleton in suit and tie, with drink in hand, while the reversed version shows a male skeleton, wearing a hat, white shirt and suspenders and playing what appears to be a banjo. Quite appropriate for the two sides of this King!

There are two additional cards that come with this deck - one in English, and one in Spanish. They act as aids in working with the Pyramid spread - one side of each card showing the layout of the spread, with the other side showing the position definitions. Symbols from two of the suits are placed on each side of the card.

At the end of the LWB two spreads are presented: a Pyramid spread and the traditional Celtic Cross spread. My one problem is that the pyramid ends up looking more like a tree, as the first card, representing the current state of the Seeker, is placed alone of the bottom row.

This is a lighthearted deck, one that is fun to work with, yet still has a story to tell. I enjoy it, and I think that you will too.


Tarot of the Dead Review by Dan Pelletier

When one begins to fan through the deck, the muted pastels are striking. You see, this is not a ‘dark deck’. Monica Knighton created a wonderful tarot world using form and style, rather than a vast palette.

The courts (and the pips) at first appear to be double ended, like a regular playing card. Careful inspection reveals that these cards contain two images – one for the upright and one for the reversed – different postures and actions for each. The non-pictorial pips are wonderful, and read differently depending on orientation.

If you spend a few minutes with the Little White Book, you will understand why Monica Knighton has changed the suits to Pistols, Pens, Coffins, and (cinematic) Reels. Don't allow the new titles to fool you... the LWB will enlighten.

On page 122, paragraph 6 of The Mystical Qabalah by Dion Fortune, we find the following; "...but the Mother is the Giver of death, because her womb is the gate of ingress to matter, and through her life is ensouled in form, and no form can be either infinite or eternal. Death is implicit in birth." Keep this in mind when feasting your eyes on the Major Arcana XIII. Embrace the fear...

I don’t know what more a person could want from a deck that celebrates life with gallows humor.

I applaud Llewellyn’s for publishing this deck for a wider audience, and for making it bilingual. Their packaging though, leaves much to be desired.

(Monica... when we finally meet face to face – I owe you a huge hug. Thank you for creating this deck.)


Similar Decks to Tarot of the Dead

Home > Decks > Tarot of the Dead