Tarot of the Master 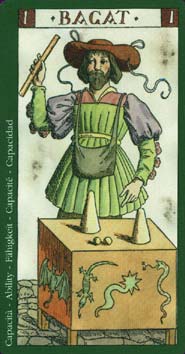 The Tarot of the Master is a recoloured reprint of a Italian tarot deck first published in 1893. The Italian titles are not translated but each card has an individual keyword printed unobtrusively on the face.


Card Images from the Tarot of the Master 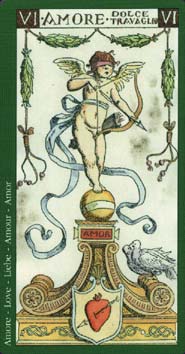 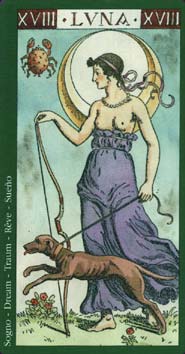 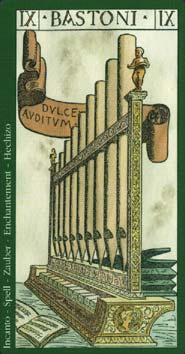 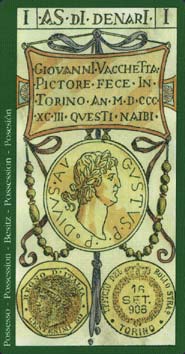 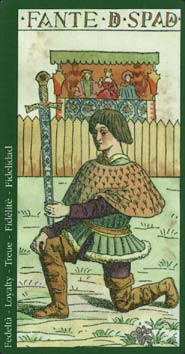 Tarot of the Master Review by Solandia

The Tarot of the Master is a re-coloured re-release of a northern Italian tarot, the 'I Naibi di Giovanni Vachetta' (The Naibi of Giovanni Vachetta). It was first published in 1893 in Turin, home in the present to the Lo Scarabeo publishing house.

Vachetta's artistic style is a mix of medieval and late nineteenth century (some cards are reminiscent of the Victoria Regina Tarot in poses and objects). His original art was coloured in harsh and bright primary and secondary shades, but the modern deck has instead been printed in a delicate, soft palette of greens, greys, pale blues and pinks to emphasise the delicacy of Vachetta's illustrations.

These cards are titled in untranslated Italian, exactly as appeared in the nineteenth century deck. The 21st century edition, showcases the original artwork with the addition of a narrow green border and, in the lower left hand edge, five keywords expressing the card's concept, in five languages. The backs of the cards are a black and white mirror image of the scene on the Magician card.

The suits in the minor arcana are Chalices, Swords, Wands, and Denari, appearing on the cards as Coppe, Spada, Bastoni and Denari. Unlike earlier tarots, the minors are not strictly pip cards. The I Naibi di Giovanni Vachetta was unusual in that the artist began to take steps towards minors with illustrated scenes, nearly thirty years before Pamela Colman-Smith's drawings for the Rider-Waite Tarot. The minors aren't pure pip cards, repetitive and unadorned, but were decorated to help illuminate the meaning. Which is a good thing, as there is a very little help with interpreting these cards. The keyword concept on the face of each minor arcanum card is the only source of documented help for the individual meaning of that card. The LWB describes the suit and any pertinent details collectively but does not mention the cards singly. This is explained in the text by stating the minors are intended to highlight the artistic treatment and 'beauty and meaning' must be searched for among the detail.

The major arcana are standard Italian tarot archetypes, and are covered separately in the LWB. The text doesn't just give a divinatory interpretation; it orients you in the linear history of tarot symbolism and offers commentary on Vachetta's artistry and departure from tarot norms. For example:

"The Magician: Ability. As in the Marseilles iconography, the Magician is more of a charlatan than a wizard. The card has not yet been dignified by the esoteric tradition so the Magician is depicted as a conjurer."

The Tarot of the Master was created in a tarot era that was free of the influence of Waite and Crowley. Indeed, the tarot was not believed to be linked with any particular esoteric discipline at the time. This is an important historical deck, which is also accessible as a deck for readings.


Tarot of the Master Review by Bonnie Cehovet

The "Tarot of the Master" was created and published in 1893 in Turin, Italy, under the title "I Nabi di Giovanni Vacchetta". It was colored and republished by Lo Scarabeo in Turin in 2002. Lo Scarabeo chose to republish this deck as a representation of historical decks, and to reintroduce concepts, illustrations and ancient icons to a modern day public. According to the LWB (Little White Book), the distribution (and influence) of this deck was centered in Northern Italy, and (apparently) not connected with any specific esoteric tradition. Quite an interesting statement is made that this deck illustrates the point that allegory in Tarot was introduced before the time of A.E. Waite and Pamela Coleman Smith, and that it was "consistent with its times".

The original deck, under the title of "Naibi", showed the "unhidden" side of Tarot, and was designed with artistic, aesthetic and symbolic purposes. In republishing the original work, it was colored to bring it closer to modern tastes and perception, using greens, light blues, grays, light lavender and light yellow.

Giovanni Vacchetta was a "Master of Design" at the Albertina Academy in Turin, as well as being professor of embellishment at the Industrial Museum in Turin and lecturer of graphics and decorative design Polytechnic School of Turin. He was primarily a scholar, teacher, and patron of minor art. The care taken in the details in this deck are a reflection of Giovanni Vacchetta's perceptions.The Minor Arcana especially reflects his attempt to show subjects in the context of scenes and events, rather than everyday objects, is considered unusual for his time.

The deck is a 78 card deck in traditional format. The suits are Wands, Chalices (Cups), Swords, and Denari (Disks/Pentacles). The Court Cards are entitled Fante (Page), Caval (Knight), Regina (Queen), and Re (King). The Major Arcana carry traditional titles with the following exceptions: Love (Lovers), Fortune (Wheel of Fortune), L'Impeso (the Hanged Man), and The Stars (The Star).

The LWB is a fold-out version, in English only. it includes a short history of the "Tarot of the Master", as well as a very informative section on Giovanni Vacchetta himself that puts the deck into perspective. The Major Arcana are presented (without scans) with a keyword and a description of the card.

The Minor Arcana are not presented by card, but there is a short discussion of Giovanni Vacchetta's perceptions for each of the suits. The suit of Chalices is seen as representing the container, and as being objects of beauty. Vacchetta uses layering and superimposing of the chalices as a reference back to sixteenth-century decks, such as the Sola Busca. References are made to the imagery and symbolism within certain individual cards within each of the suits. The court cards for the suit of Chalices are viewed as symbols of nourishment. The Knight and Knave stressing the communicative nature of the suit, while the Queen (a cook) represents nourishment, and the King (a wine grower) represents a toast.

Wands are seen as the suit of life, and of masculine energy, with the element of fire, and with work. The court cards highlight the rural and pastoral nature of the Wands.

The suit of Denari is seen as representing goods, possessions, and the earth. It is noted that for Vacchetta, they may also represent the passing of time and history. The court cards of this suit underline the economic aspects of life.

The LWB contains a section on "Exercises With the Historical Tarot", which was included as a way to help the reader understand the historical iconography. The three exercises included are: (1) using the key word to help understand the card, and to compare the attributers of each image with its meaning, which will help establish a connection within a reading, (2) keeping the main meaning in mind, observe the card and notice other information that comes from the illustration, in this manner secondary meanings can be developed, and (3) do a reading using the deck.

The spread presented in the LWB is entitled "the Bridge". It is a four card spread with the following position definitions: (1) the span (a meeting point between two positions, the direction that will open communication and bring about reconciliation), (2) the left bank (represents the essential nature of the first idea, or attitude - the point of view of the Seeker), (3) the right bank (the essential nature of the second idea or person - something external), and (4) the person who crosses it (representing a human presence, the desire to approach idea or people, this card indicates how things should be approached). It is suggested that if only the Major Arcana are used for this reading, that cards from the Minor Arcana can be drawn to "complete" the spread. Place two cards on top of each of the previously drawn Major Arcana cards. Each of these cards refers to the energy expressed within the Major Arcana card. The first card represents "How is it shown?", and the second card represents "How does it evolve?"

The cards themselves are 2 1/2" by 4 3/4", on glossy, sturdy card stock. The backs show a black and white representation of the Magician. surrounded by a figured border, with a 1/4" white outer border. You would be able to tell if the cards were drawn in a reversed position.

The Minor Arcana are shown with a 1/4" green border, and the suit title, in old Italian, at the top of the card. On either side of the suit title is placed the card number. The Minors show human figures, and small scenes, as well as the suit icon. The signature for Giovanni Vacchetta has been placed on one card in each of the suits: the II Coppe (Two of Cups), the As di Denari (Ace of Disks/Pentacles), the II Di Bastoni (Two of Wands), and II Spade (the Two of Swords). For the Court Cards, the Title and Suit (in old Italian) are at the top of the card. For the Pips and the Court Cards, a keyword is listed along the left hand side of the card, in five languages, including English.

In terms of historical decks, I find this to be of importance. It is quite easy to see the progression of imagery from historical times to current times, and it adds depth to the deck when information about the artist and his personal background/history is included.


Complete Details of Tarot of the Master


Similar Decks to Tarot of the Master

Home > Decks > Tarot of the Master